Data about the “Labor Shortage” pile up.

The weekly unemployment insurance claims data from the Labor Department — the latest batch was released on Thursday – has been making it relentlessly clearer by the week: In the 27 states that have ended the extra $300 a week in federal unemployment benefits (the Enders), people returned to work at a vastly faster rate than in states that retained the extra $300 a week (the Keepers).

This is based on continued unemployment insurance (UI) claims by state, reported weekly by the Department of Labor, and it is not survey based. Today’s “continued claims” reflect the number of people that have claimed UI for at least one week. A drop in continued claims would indicate that they have started working again.

Since the end of June, the “continued claims” for the US overall dropped by 20%, to 2.62 million (not seasonally adjusted), according to the Department of Labor, the lowest since the employment crisis began in March 2020. But they dropped over twice as fast in the Enders than in the Keepers: 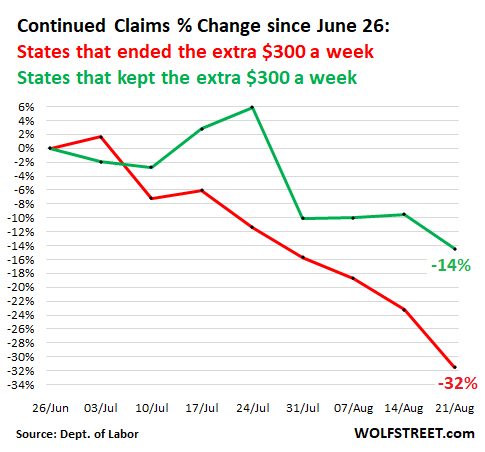 The first group of states ended the extra $300/week in early June. At the end of June, the big states Texas and Florida joined them. These Enders are still paying the regular state unemployment benefits, but ended the federal top-off benefits of $300 a week.  The remaining states and Washington DC kept the extra $300 a week.

I put the states into two groups, the Enders and the Keepers, and added up each group’s total “continued unemployment claims” for each week, going back to the late June reporting week. 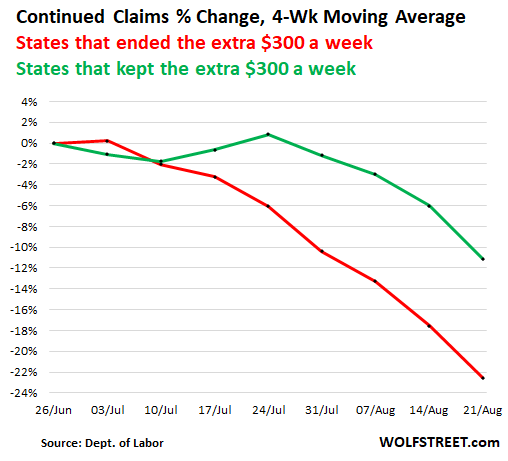 Numerous other economists have also figured this out. According to The Wall Street Journal:

Economists at Goldman Sachs analyzed the behavior of workers in the July jobs report after adjusting for age, gender, marital status, education, household income, industry and occupation of a respondent’s current or prior job. They said they found “clear evidence that benefit expiration increased the rate at which unemployed workers became employed.”

Goldman Sachs estimated that if all states had ended benefits, July payroll growth would have been 400,000 stronger. Economists at the firm projected the nationwide benefit cutoff this month will account for 1.5 million job gains through the end of the year.

Anyone trying to fill open positions recently has figured out in their gut that part of the “labor shortage” they were facing, while millions of people were unemployed, was due to potential workers being incentivized not to work, with the extra $300 a week in benefits, on top of the state benefits, on top of not having to pay rent due to the eviction moratoriums, or not having to make mortgage payments due to the forbearance programs. The extra $300 a week were designed to allow people to pay for housing, and then they didn’t have to pay for housing either.

It’s one thing to make those policy decisions at the federal government level, but it’s quite another thing that the mainstream media are trying to cover up the side effects of those policies.

The federal $300 per week expires on September 6 for all states. Some states will then replace it with a state-based $300 a week, funded by federal stimulus payments sent to states. As these $300 a week fade out in more states, I would expect a series of strong jobs reports as people flood back into the workforce to fill open positions.

225 comments for “In States that Ended the Extra $300/Week Unemployment Benefits, People Returned to Work at Over Twice the Rate than in the Other States: Data from the Labor Department”