Subsidized by investors who lost their shirts, cheap natural gas was a huge benefit to the US economy for years.

The fracking strategy used to be: Production growth at all costs, no matter what the costs. Over the past 13 years, negative cash flows, losses, and, starting in 2015, bankruptcies piled up as a historic boom in production of crude oil and natural gas caused prices to plunge. But now, after a brutal shake-out in 2020, production of natural gas has remained below peak 2019 levels, even as exports rose. Prices have risen in response, but this time, the rising prices haven’t yet triggered another production boom that would collapse prices once again.

The fracking boom has turned the US from a net importer of natural gas into the largest natural gas producer in the world. Much of the production is consumed in the US by power generators, the chemical industry, and other industries. The remaining production is exported via pipeline and LNG.

The price of natural gas is currently at $3.95 per million Btu at the Henry Hub. This morning and during some periods last week, it traded at over $4. Outside of periodic spikes, such as during the Big Freeze in Texas, a range of around $4 is above where it had been over big periods since the fracking-induced price collapse in 2008/2009. The price has nearly tripled since June 2020, when it was trading in the $1.50 range: 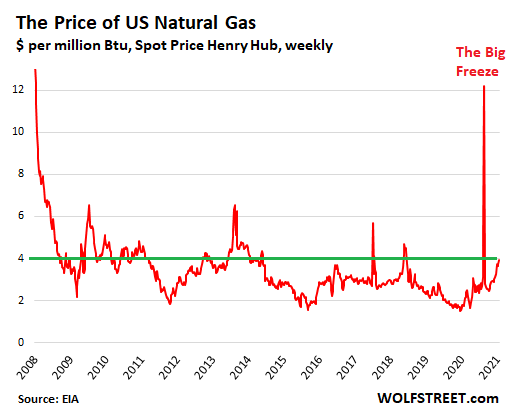 Natural gas production has been in the range of 113 billion cubic feet per month since late last year through May, according to data released by the EIA on Friday. The fact that production hasn’t really budged in months, and remains below peak levels, has caused a lot of talk in the industry of a new-found “discipline” among producers, many of which went through bankruptcy in 2020 and prior years. These producers are suddenly seen, unlike in prior years, as being careful not to trigger another collapse in price.

Production collapsed during the pandemic, but then only partially recovered, interrupted by the February 2021 plunge due to the Big Freeze that shut down production in Texas and some other areas. 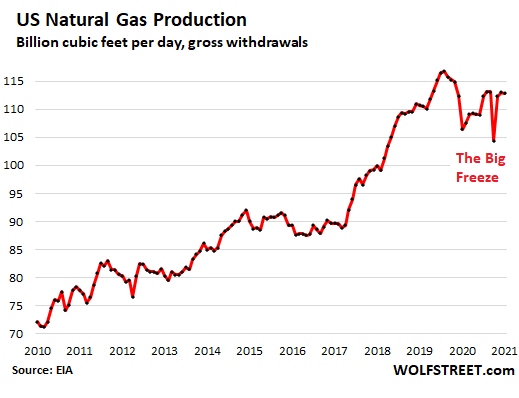 Surging exports, via pipeline and LNG.

Fracking caused natural gas production to surge so fast that building out pipelines from producing areas to large urban areas had trouble catching up, particularly in the Northeast. Much of this has by now been resolved but pipeline challenges remain, and parts of the Northeast remain dependent on imports from Canada via pipeline, and during peak demand periods in the winter, on LNG imports.

Due to problems connecting producing areas with cities in both countries, there has been a lively trade in natural gas between the US and Canada, with the US exporting some natural gas to Canada, but importing a lot more. Total pipeline imports in May, nearly all of it from Canada, dropped to 204 billion cubic feet.

Mexico has become a huge customer of the US natural gas industry as the US has been building out its pipeline infrastructure to Mexico, and exports of natural gas to Mexico have surged over the years. The US imports practically no natural gas from Mexico.

Total pipeline natural-gas exports have risen by 70% over the past 10 years, to 260 billion cubic feet in May (green line in the chart below).

LNG export terminals started to come on line in 2016 and have since then multiplied, and US exports of LNG have boomed, overtaking pipeline exports late last year for the first time. In May, the US exported 315 billion cubic feet of LNG (black line).

Both LNG and pipeline exports combined amounted to 575 billion cubic feet, having quadrupled over the past 10 years (red line): 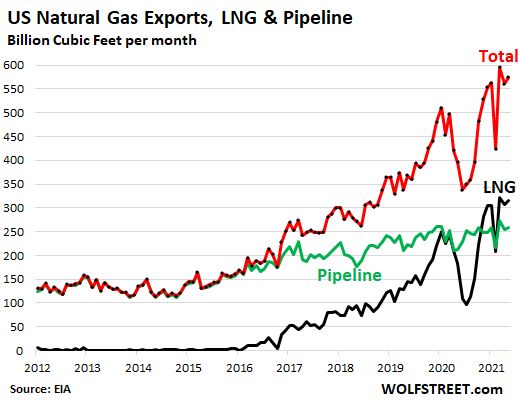 Back in the day, the US produced quite a bit of natural gas, but not enough and had to import large quantities, not only from Canada, but also via LNG, which is much more expensive. Then the fracking boom started, and it did have the effect that the US turned from a large net importer of natural gas into a large net exporter in 2017.

Net exports – driven by a surge in exports and the lowest imports since the early 1990s – hit a new record in May of 370 billion cubic feet: 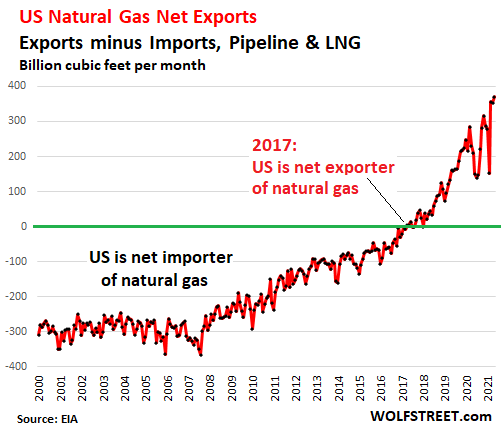 All of it subsidized by investors who lost their shirts.

Cheap natural gas – after the price collapsed in 2008 and 2009 – brought large benefits to the US economy in form of low-cost electricity and feed stock for the chemical industry.

But it also caused a major shift away from coal which could no longer compete with cheap natural gas and the thermal efficiencies (now in the 65% range) of the combined-cycle powerplant that uses a natural gas combustion turbine (like a jet engine) to drive a generator and then uses the hot exhaust gases to create high-pressure steam (like a coal powerplant) to drive a steam turbine. Just about all coal mines have filed for bankruptcy since the arrival of cheap natural gas and the combined-cycle powerplant, and many have been shut down.

All of this was subsidized by investors who plowed however many hundreds of billions of dollars into the fracking business and watched their money get burned up by cashflow-negative companies, many of which have filed for bankruptcy, including one of the natural-gas fracking pioneers, Chesapeake Energy. It finally filed for Chapter 11 bankruptcy in June 2020, after having teetered on the verge for years, but was kept from going over the cliff by investors that continued feeding it fresh money until they finally cried uncle.