The US rental market has been thrown into turmoil. But in no major city have rents plunged from so high by so much so fast as in San Francisco.

The median asking rent for one-bedroom apartments in San Francisco in April fell to a new multi-year low of $2,600, down 30% from the peak in June 2019, according to data provided by Zumper: 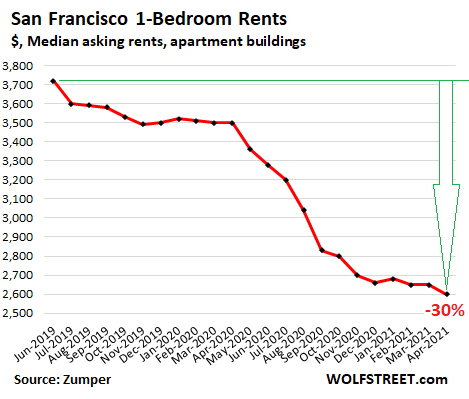 The five-county San Francisco Bay Area is also the only housing market in the Case-Shiller Index that is now infamous, amid a nationwide blistering melt-up of home prices, for condo prices that have declined compared to a year earlier and are at March 2018 levels.

In San Jose, the largest city in the Bay Area and part of Silicon Valley, the median asking rent for 1-BR apartments fell to a multi-year low of $2,050, down 19% from the recent peak it bumped into in July 2019, and then again in March and April 2020: 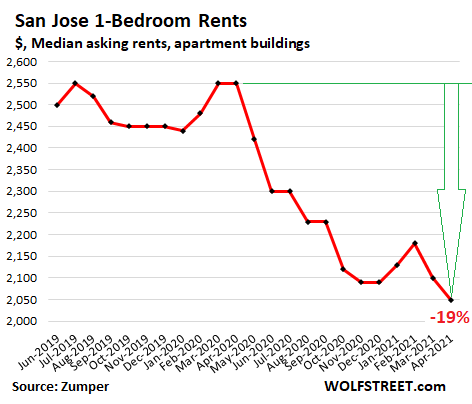 These “asking rents” are compiled by Zumper from rental listings on Multiple Listings Service (MLS) and other listing services. But they do not include concessions, such as the very common “two months free,” which lower the effective rents further.

“Median” asking rent means half of the asking rents are higher and half are lower. The rental units are in apartment buildings, including new construction, but do not include single-family houses for rent or condos for rent.

Rents for 2-BR apartments in San Francisco, after plunging for months, have been stable over the past few months, with the median asking rent stuck at $3,500, down 30% from the peak in October 2015 and down 27% from July 2019.

There is now a vibrant churn in San Francisco, as many of the renters on month-to-month leases are shopping around and browsing through the large number of vacant units.

So people are using the plentiful vacancies and the deals they get from landlords, such as “two months free,” to upgrade to bigger and nicer units. Landlords that offer the right kind of deals can get their units filled. Other landlords sit on vacant units, waiting for better times.

These data providers that put 1-BR and 2-BR apartments into the same bucket may show a median rent increase in their summary figure, skewed by this shift in mix to bigger nicer units, without there having been any increases in asking rents per apartment type. And of course, this has played out on the front pages of the local media.

In San Jose, the median rent for 2-BR apartments has been around $2,660 for several months, after having dropped 13% from early 2019. Here too, the vibrant churn and flight to quality has created some stability of larger nicer units at a lower price.

There are now all kinds of reports on the work-from-homers who have left San Francisco and Silicon Valley for cheaper pastures. Many of them found those cheaper pastures within two to three hours by car from San Francisco, and rents in those markets have exploded under the influx of people with suddenly a lot of extra money to burn. 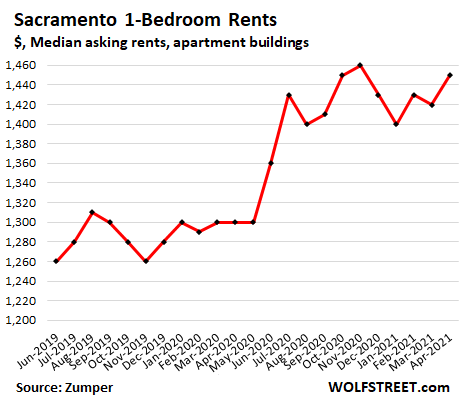 In Fresno, about 150 miles southeast of San Jose, the median 1-BR asking rent in April has soared by nearly 30% from the recent low point in September 2019. Clearly, some of these shifts have been going on before the Pandemic, and the Pandemic accelerated them: 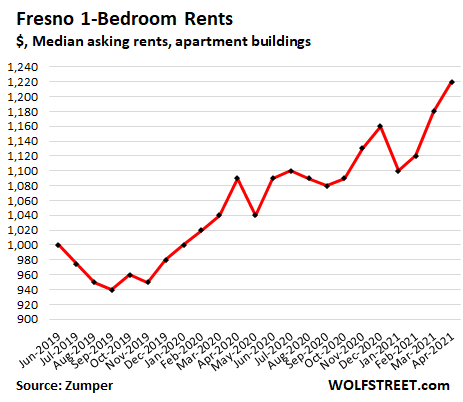 And the difference shrinks. 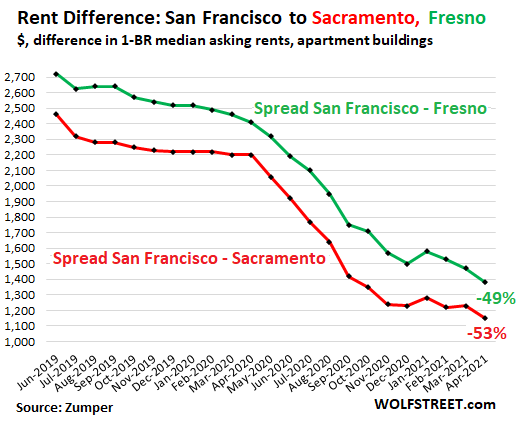 It doesn’t take much for the exodus from a large market like the Bay Area to cause major rent turmoil in smaller surrounding markets, such as Sacramento or Fresno, and this may continue to put some upward pressure on rents in those inland cities. But the sharply narrowing spread in rents makes the move less of a money-saver and less of a motivator than it was a year ago.

A similar scenario has played out across the US, with shifts from the most expensive rental markets to cheaper pastures, triggering the corresponding plunges and spikes in rents. That the US rental market has been thrown into turmoil is an understatement. And this is just an example — though in no major city have rents plunged from such a high pedestal by so much so fast as in San Francisco.

54 comments for “It’s Not Over: Rents in San Francisco Down 30%, in Silicon Valley Down 19%, both at Multi-Year Lows. But Inland Rents Spike”