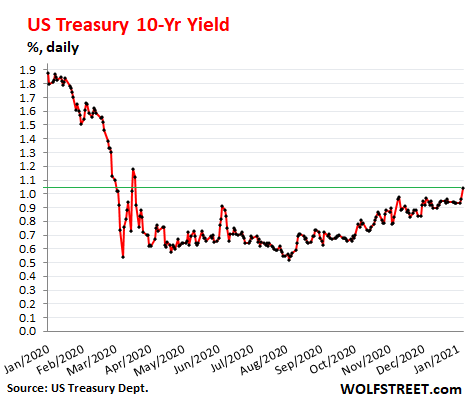 The 30-year yield jumped 11 basis points today to 1.81%, the highest since February 26. On March 3, as all heck was breaking loose, the yield had briefly plunged below 1% for the first time ever, and days later it was back at nearly 1.8%, in some wild and volatile panic trading. But this time, the upward trend started on August 4 and has been systematic: 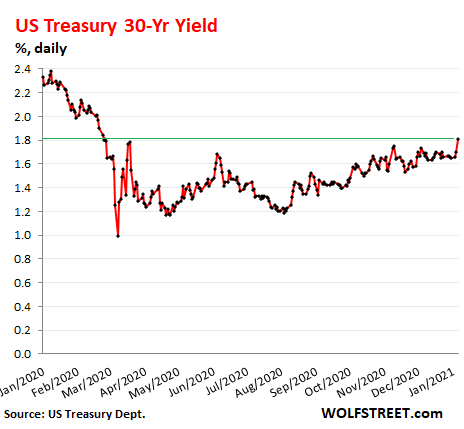 Chicago Fed President Charles Evans, a voting member this year on the FOMC, explained yesterday at a virtual meeting that “frankly if we got 3% inflation that would not be so bad” as long as it is not accelerating uncontrollably.

Inflation destroys the purchasing power of bonds. The yield is supposed to compensate for that risk. But in this scenario, with current Treasury yields, it’s not even close.

And mortgage rates got nervous over the past couple of days. For example, the average jumbo fixed-rate 30-year mortgage rate jumped by 13 basis points today, from near record lows, to 3.25%, according to Mortgage News Daily. Maybe just a blip, but it shows some nerves got jangled.

But clearly, bond markets are only getting a teeny-weeny bit nervous because yields are still extremely low. Left up to its own devices, the Treasury market with these Fed-inspired visions of inflation, might react more strongly. But the Fed is still buying Treasuries and mortgage-backed securities, and that is keeping a lid on the upward moves. And holders of those securities at those yields will just have to eat the inflation.