Incomes from wages, interest, and dividends sagged from pre-Pandemic era. But stuffed with stimulus, Americans broke records splurging on Goods, as spending on Services, the biggie, lagged far behind.

Consumers – lacking income from wages, interest, and dividends, but stuffed with stimulus money, the extra $600 a week in unemployment benefits, the amounts not-spent on mortgages in forbearance or default, the amounts not-spent on rents under eviction bans, and too the amounts from the stock-market gains – splurged on goods. They spent record amounts on durable goods, such as appliances, laptops, and bicycles. And they spent near-record amounts on nondurable goods such as cleaning products or food.

But the biggie in the US is services such as rent, health care, or food services. Before the Pandemic, 66.7% of what consumers spent went to services. But consumer spending on services was down 9.2% in July from pre-Pandemic February.

That’s the type of twisted picture that the Bureau of Economic Analysis reported today, of a consumer economy that runs on the fumes of stimulus.

Personal income from all sources in July, including stimulus and the extra $600 a week in unemployment benefits, but also rental income, dividend income, etc. – but not stock market gains – ticked up 0.4% from June to a seasonally adjusted annual rate of $20.04 trillion. This was down from the spike in April caused by the stimulus checks, but was still up by 4.8% from February and by 8.2% from July last year. 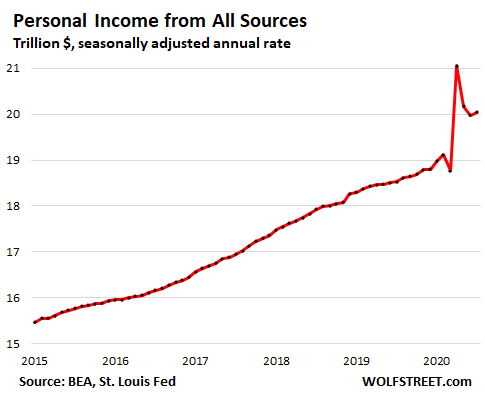 How did unemployment benefits impact personal income? Unemployment insurance exploded by $1.336 trillion (all annual rate figures), from $27.8 billion in pre-Pandemic February to $1.364 trillion in July.

Personal income, including unemployment benefits rose by $920 billion from February (19.12 trillion) to $20.04 trillion in July.

Personal income without unemployment insurance dropped by 6.7% from February, or by $1.34 trillion (all annual rates), to $18.7 trillion in July. This $1.34 billion decline was driven mostly by declines in:

Personal income from wages and salaries alone, while ticking up from June to $9.2 trillion (annual rate), was still down 5.0% from pre-Pandemic February: 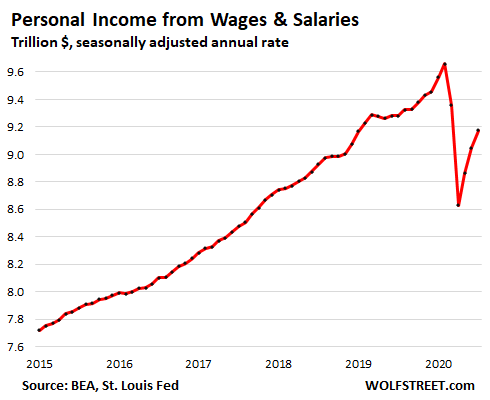 Consumers splurged on Goods, but scrimped on services.

Total consumer spending in July, at $14.2 trillion (annual rate), slowed its recovery, ticking up by 1.9% from June, and was still down, despite all this stimulus money, by 4.6% from February: 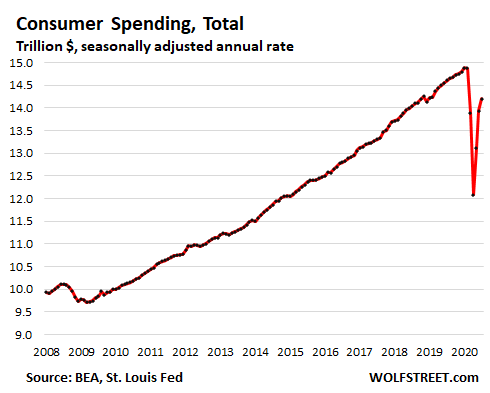 Consumers forked over a record amount for durable goods, $1.74 trillion (annual rate) in July, up by 12.2% from February and by 12.6% from July 2019. This includes a surge in spending on laptops and other electronic equipment needed for working, teaching, and studying at home: 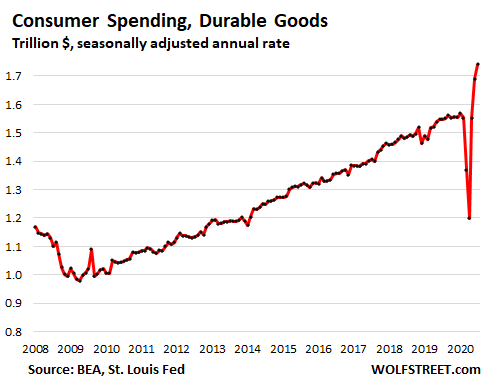 Consumers splurged at near-record pace on nondurable goods, $3.10 trillion (annual rate), up 3% from February but down a tad from the record set in March, when they cleaned out supermarkets down to bare shelves, ranging from pasta to toilet paper. This was followed by a plunge, and now back to Pandemic normal, where people eat at home, work at home, study at home, and teach their kids at home, which shifts purchases from businesses and schools to households, and therefore to consumer spending: 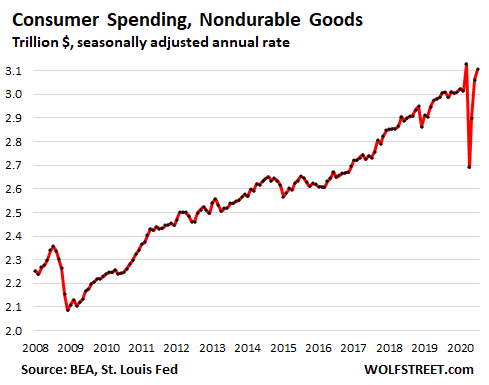 Services include the biggies, such as rent, health care, insurance, travel and lodging, cellphone services, cable TV and broadband subscriptions, electricity, water, sewer, but also haircuts, food services such as in restaurants, auto and home repairs, and the like. Normally, around 67% of total consumer spending is for services. 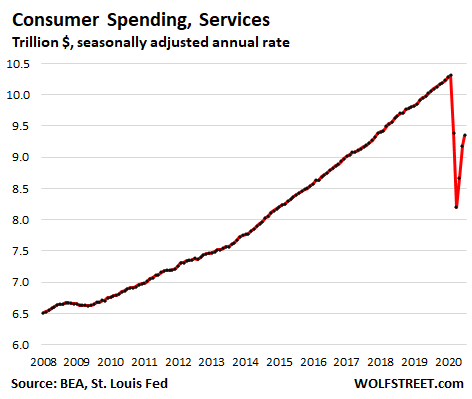 So this Pandemic-economy picture emerges:

Consumers are spending the stimulus money on goods, and particularly on durable goods.

By working, eating, teaching, and studying at home, they’re spending money that businesses and schools would have spent otherwise – and this part of their spending is just a shift, a zero-sum game in the overall economy.

By spending record amounts on goods, they’re channeling some of this stimulus money into imports, which is a stimulus for manufacturing sectors in other countries but gets deducted as a negative from the US GDP calculations.

And Consumers are not spending this stimulus money on services, which would mostly go to service providers in the US.

Now folks are sitting on the edge of the national chair, waiting for the next stimulus check and the extra unemployment money – because without them, many folks won’t have enough money to keep splurging on goods like this.