Trying to figure out what the actual unemployment situation in the US is has become tricky. The government produces two major indicators that contradict each other. The Department of Labor said last Thursday that 30.2 million people continued to claim state or federal unemployment insurance, based on actual unemployment claims that were processed, however behind they may still be. And the Bureau of Labor Statistics asserted that the labor market has improved rapidly since April, and that in June, unemployment was down to 17.8 million people.

In recent weeks, the Census Bureau has weighed in with its own weekly Household Pulse Survey, which shows a labor market that is still in terrible shape and may be getting worse, and the pain has spread far and wide into households.

The Census started the Household Pulse Survey in response to the Pandemic. Its “Week 1” was based on surveys sent to households in the week from April 23 through May 5.

“Experienced a loss of employment income since March 13?”

One of the questions the Census asks households is this: “Have you, or has anyone in your household experienced a loss of employment income since March 13, 2020?” yes or no, for whatever reason, not just layoffs, but also illness, having to care for a relative, etc. So, this is not a measure of “unemployment” per se, but of how the Pandemic has touched work-based incomes.

The latest survey was for “Week 12” – data collected from July 16 through July 21. It showed that of the adults (aged 18+) in the US, an astounding 51.2% had experienced a “loss of employment income” for whatever reason during the Pandemic. This was up from 47.0% during “Week 1” ended May 5: 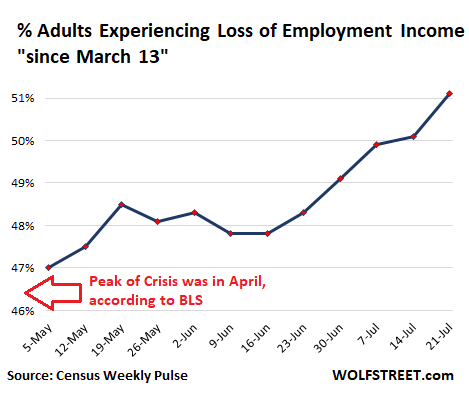 By income category, it is clear that the lowest paid workers were the most impacted by the loss of income, with the top income category being the least impacted. This splits into the types of occupations: lower-paid workers in the service jobs of the restaurant and hotel industry and other sectors that got totally crushed, and with the highest-paid jobs being most suitable to working-from-home:

% of Adults experiencing loss of employment income since March 13, by income category:

This “loss of employment income” varies by state, depending on numerous factors, including the states that got hit early and hard by the virus, and states with specific industries that shut down, such as casinos in Nevada, and states that have recently gotten hit by big outbreaks.

Across the US in Week 12, 51.1% of the adults reported a loss of employment income since March 13. Here are the 12 worst-hit states:

To drill into the current work situation, the survey asks: “In the last 7 days, did you do ANY work for either pay or profit?” Yes or no, including all kinds of jobs and self-employment. What’s important here is to compare the results for Week 12 to Week 1 to see if this has improved – which it should have improved a lot, based on the BLS data.

But Week 12 was the time of summer jobs, and in the age group of 18-24-year-olds, this improved by 6 percentage points, to 45% not having done any work over the past 7 days in Week 12. For other age groups it didn’t look so good:

This data from the Census Bureau corroborates the data from the Labor Department that the damage to employment has been huge, and widespread, and that it is perhaps shifting, but that the big recovery in May and June that the BLS has asserted is not yet visible in the data outside the BLS’ own fanciful math.

180 comments for “The Census Bureau’s Grim Take on the Employment Shock During the Pandemic: Not Improving Yet”