The sudden declines in production illustrates the fatal flaw in the shale business model.

By Nick Cunningham of Oilprice.com:

Oil and gas production in the United States has peaked and is already in decline. The latest data from the EIA’s Drilling Productivity Report sees widespread production declines across all major shale basins in the country. The Permian is set to lose 76,000 bpd between April and May, with declines also evident in the Eagle Ford (-35,000 bpd), the Bakken (-28,000 bpd), the Anadarko (-21,000 bpd) and the Niobrara (-20,000 bpd).

Natural gas production is also in decline, a reality that occurred prior to the global pandemic but is set to accelerate. The Appalachian basin (Marcellus and Utica shales) are expected to lose 326 million cubic feet per day (mcf/d) in May, a loss of 1 percent of supply. In percentage terms, the Anadarko basin in Oklahoma is expected to see an even larger drop off – 216 mcf/d in May, or a 3 percent decline in production.

The sudden declines in production illustrates the fatal flaw in the shale business model. Once drilling slows down, production can immediately go negative due to steep decline rates. Shale E&Ps have to keep running fast on the drilling treadmill in order to keep production aloft. But the meltdown in prices has forced the industry to idle 179 rigs since mid-March.

With drilling grinding to a halt, output has slumped as “legacy” production declines take hold. That is, without new wells coming online to offset the declines from existing wells, overall production falls. 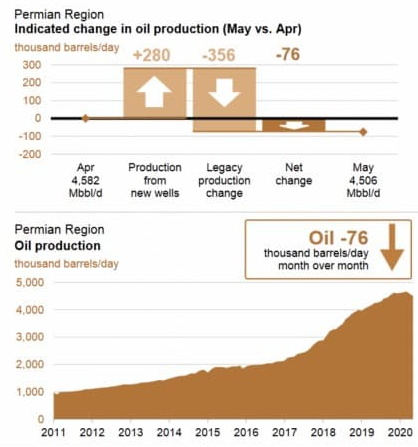 That legacy decline rate has deepened with each passing year, requiring more aggressive drilling each month to keep production on an upward trend. But the treadmill has finally caught up to the industry.

The OPEC+ deal won’t rescue a lot of shale companies. The demand destruction is simply too large for the OPEC+ cuts. With WTI at $20 per barrel on Tuesday, Permian drillers are actually receiving quite a bit less than that.

“Since humans started using oil, we have never seen anything like this,” Saad Rahim, chief economist at Trafigura Group Pte. Ltd., told the Wall Street Journal. “There is no guide we are following. This is uncharted.” He estimates demand has plunged from 100 million barrels per day (mb/d) to just 65-70 mb/d currently.

The WSJ says that oil storage in Cushing, OK could be full by the end of the month, which could abruptly force production shut ins in Oklahoma and Texas. That suggests the EIA estimate for a decline in U.S. shale production of 183,000 bpd in May could be optimistic.

Meanwhile, analysts are eyeing a rebound for gas because of the supply curtailments already underway. The shut-ins in the Permian also help balance gas markets because associated gas will decline along with oil.

“We believe the prospects of crude oil shut-ins and lower oil drilling activity are likely to shift the natural gas supply-demand picture from bearish to bullish over the next 9months assuming normal weather,” Goldman Sachs wrote in a note. “We assume 2021 Henry Hub natural gas price of$3.25/MMBtu on average, above our $2.75/MMBtu mid-cycle estimate.” Henry Hub is currently trading at around $1.70/MMBtu.

The crisis for oil drillers has some of them clamoring for regulation from the Texas Railroad Commission. But no matter which way the RRC decides, cuts are in the offing.

A more worrying prospect for U.S. shale is that the OPEC+ deal, as ineffectual as it was at boosting prices, may not prove sustainable. “The current deal has been forged under duress and is much more likely to fall apart over time,” Bjarne Schieldrop, chief commodities analyst at SEB, said in a statement. “Saudi Arabia’s economic need for a production volume of 12-13m bl/day in a $50/bl world, and Russia’s strong distaste for production cuts as a means for achieving higher prices, are fundamentals which the current deal cannot circumvent.”

Saudi Arabia hiked prices for shipments heading to the U.S., a nod to President Trump and the OPEC+ agreement. But it cut prices to shipments to Europe and Asia, evidence that Riyadh is not done with its market share strategy.

“The official selling prices for its May oil shipments, which have been announced after a one-week delay, should be interpreted as a warning to other oil exporters if they do not toe the line,” Commerzbank wrote on Tuesday. “[T]he price war is continuing to simmer on a low level.” By Nick Cunningham of Oilprice.com