Because “the coronavirus poses evolving risks to economic activity,” despite the “strong” fundamentals of the US economy, and despite stocks being off just 7.8% from all-time highs, the Fed’s FOMC announced during trading hours this morning, following the G-7 conference call, that it had voted unanimously to cut the target for the federal funds rate by half a percentage point to a range between 1% and 1.25%:

The fundamentals of the U.S. economy remain strong. However, the coronavirus poses evolving risks to economic activity. In light of these risks and in support of achieving its maximum employment and price stability goals, the Federal Open Market Committee decided today to lower the target range for the federal funds rate by 1/2 percentage point, to 1 to 1‑1/4 percent. The Committee is closely monitoring developments and their implications for the economic outlook and will use its tools and act as appropriate to support the economy.

But at the moment as I’m writing this, the impact of the biggest rate cut since the Financial Crisis is not propitious, with the Dow and the S&P 500 down between 1.5% and 2.0%. Note yesterday’s spike, about half of which has been undone at the moment: 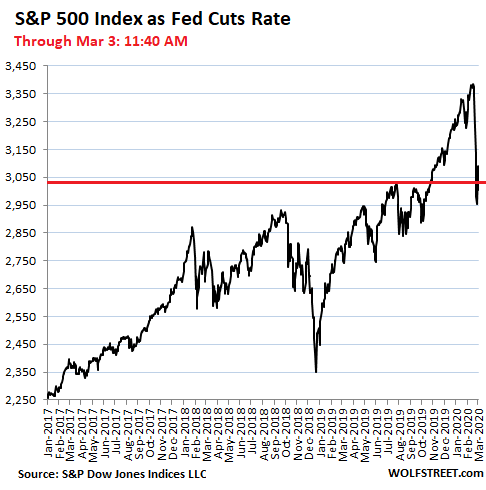 This 50-basis-point shock-and-awe surprise rate cut occurred as the S&P 500 was just 7.8% off its all-time high, after the biggest one-day surge since 2009. And it occurred after the 10-year Treasury yield already hit an all-time low and is now just barely above 1%.

China has shown the way: Even as 70% of its economy was shut down to slow the spread of the virus, the government, the state-owned big four banks, the PBOC, which is part of the government, and the many state-owned companies, and state-controlled financial actors, working closely together, have managed, after a big one-day drop to push up stock prices and bond prices. The Shanghai Composite Index today was above where it had been at the end of the year, before the coronavirus cropped up as an issue.

And the government is seeing to it that companies that are teetering on the cliff don’t default on their bonds. For example, it has taken over HNA Group, the conglomerate with its 18 or so airlines in collapse-mode, and bondholders, which are going to be made whole in all likelihood, are breathing a huge sigh of relief. Markets are under control. No problem.

Cutting interest rates has turned into a cure for everything – with dubious results outside of asset price inflation. No one is going to get on a plane, after backing out of a trip due to the coronavirus, or stop panic-buying toilet paper because the three-month Treasury bill yield has dropped to 1%.

But even asset-price inflation may not be the result this time because too many underlying dynamics have changed, and even lower short-term rates – they were already super-low – are unlikely to change those underlying dynamics. But now the Fed can say that it has done its job. And we get to watch how the show unfolds.

“We are preparing for the possibility of further reductions to our schedules as the virus spreads.” Read...  Just How Bad Is It Going to Get for US Airlines?