Bailing out its crybaby-cronies on Wall Street, even when there isn’t a crisis.

The total amount of repurchase agreements (“repos”) on the Fed’s balance sheet as of December 4, released today, declined to $209 billion, from $215 billion a month ago. These repos included: 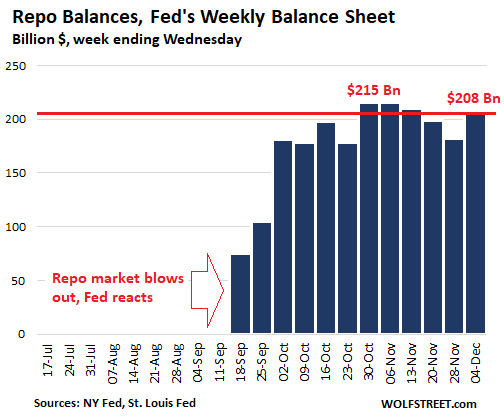 Via these operations, the Fed effectively lends to the repo market at rates that are within its target range for the federal funds rate. Today’s overnight repo operations had a rate of 1.55%. This is a way to push all repo rates down into the Fed’s range. And it guarantees that companies that borrow in the repo market, including mortgage REITs and others, can borrow at these ultra-low rates.

There had been no T-bills on the Fed’s balance sheet for the last few years. But earlier this year, the Fed changed strategy and switched to replacing some of its maturing longer-dated securities with T-bills. Then following the repo market blow-out, it decided to douse its Wall Street cronies with cheap cash. Under this program, it said it would add $60 billion a month in T-bills. Since July, it has piled on $179 billion in Treasury securities, including $77 billion in October and $65 billion in November, the biggest monthly increases since the depth of the Financial Crisis.

Only this time, there was no crisis. All that happened was that the repo market had had a hissy-fit and that rates spiked. And instead of letting the market take care of it, and let some risk-takers eat dust for taking these risks, the Fed is bailing them out. When it comes to bailing out its crybaby cronies on Wall Street, even when there isn’t a crisis, the Fed stops before nothing: 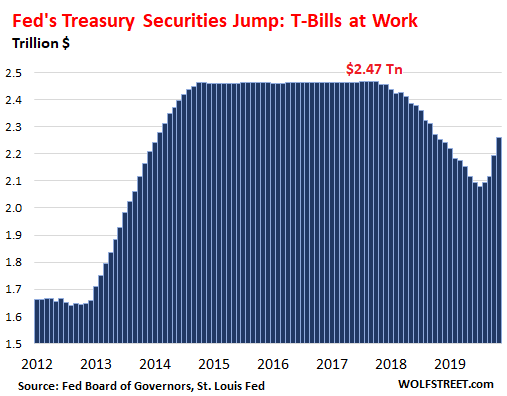 The Fed has stated many times that it wants to get rid of its holdings of MBS. And it’s progressing with the plan. In November, the Fed shed $22 billion in MBS, exceeding the self-imposed cap of $20 billion per month for the seventh month in a row. Over the past seven months, it has shed $160 billion in MBS, or about $22.8 billion a month on average. Its holdings are now down to $1.42 trillion, below where they had first been in November 2013: 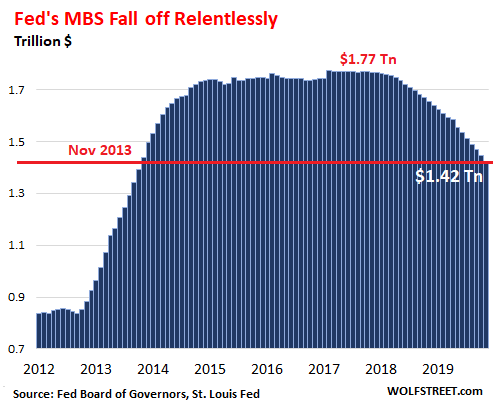 The net effect of the surge in Treasury securities, the drop in MBS, and the small decline in repo balances along with some other factors, is that total assets rose by $26 billion from the prior month, to $4.07 trillion, having jumped by $304 billion in three months, the fastest since the post-Lehman months in early 2009: 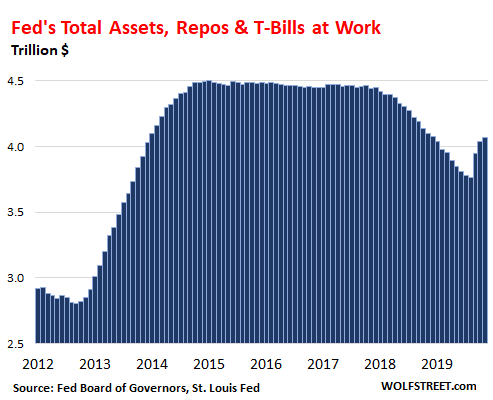 Even though the Fed is dousing its crybaby cronies with cash and is bailing them out in the repo market, it is not targeting long-term interest rates, which it had done during QE. Instead, it is unloading MBS with long maturities and is piling on short-term T-bills, which has allowed long-term rates to tick higher from the lows last summer before this freak show began.

Whose Bets are Getting Bailed Out by the Fed’s Repos & T-Bill Purchases? Read...  What’s Behind the Fed’s Bailout of the Repo Market?

126 comments for “Fed Goes Hog-Wild with T-Bills, But Repos Drop from a Month Ago, and MBS Shrink by $22 Bn”