US barely Cleanest Dirty Shirt among the manufacturing giants.

Manufacturing in the US is growing at crawl-speed or is actually declining, depending on who the beholder is. China appears to be on a similar track, with manufacturing export orders in particular trouble. But the other manufacturing giants – Germany, Japan, and South Korea – are not so lucky. 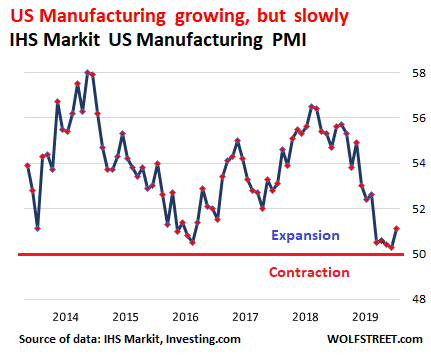 These “Purchasing Managers Indices” (PMIs) are based on how a panel of executives of manufacturing companies – names are not disclosed – see various aspects of their own businesses, such as new orders, production, and employment. Values over 50 mean growth (the more the value is above 50, the faster the growth); values below 50 mean contraction.

“Tentative signs of renewed vigor are appearing in the US manufacturing sector, with the survey’s production gauge having now risen for three successive months to suggest that the soft patch bottomed out in July,” the IHS Markit report said.

“Growth of new orders hit a six-month high, fueled in part by a renewed increase in exports, prompting producers to take on more staff, with payroll numbers rising at the quickest pace since May.”

The ISM Manufacturing Report, had a drearier view of the US manufacturing sector, with October being the third month in a row of declines, but the decline was slightly less fast than the month before – that’s the good news, so to speak, “but sentiment remains more cautious than optimistic” (data via YCharts): 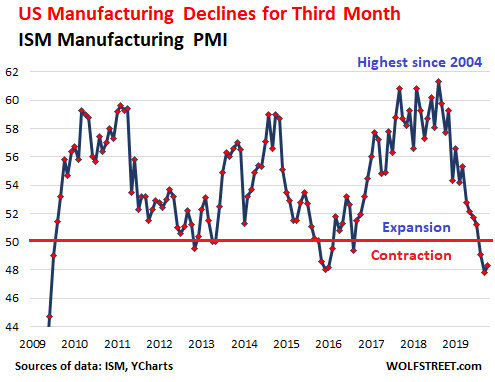 Germany has implemented an industrial policy that favors exports of manufactured goods, and is particularly focused on the auto industry, not only making cars and components, but making the machinery and robots for auto manufacturing plants. And when global auto sales suddenly go into decline, as they’ve been doing, and when demand for manufactured goods in general slows, well then, it’s time to get into doom-and-gloom mode.

The preliminary IHS Markit/BME Germany Manufacturing PMI for October, at 41.9, along with September (41.7), remained at the lowest point since the Financial Crisis, confronting Germany with the sharpest contraction among the manufacturing powerhouses: 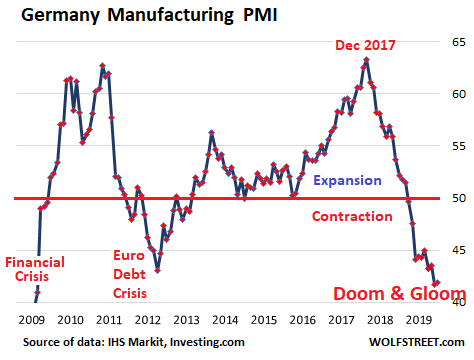 “Staffing numbers fell to the greatest extent for nearly ten years amid the widespread paring of temporary and contract workers,” the report said. In terms of business sentiment, “manufacturers remained strongly pessimistic about the outlook, though expectations rebounded further from August’s record low.”

The doom-and-gloom situation in Germany, the largest economy in the Eurozone, is dragging down the overall manufacturing sector of the Eurozone, with the preliminary IHS Markit Eurozone Manufacturing PMI remaining deeply in contraction mode, at 45.7 for October, same as in September, the ninth month in a row of shrinkage: 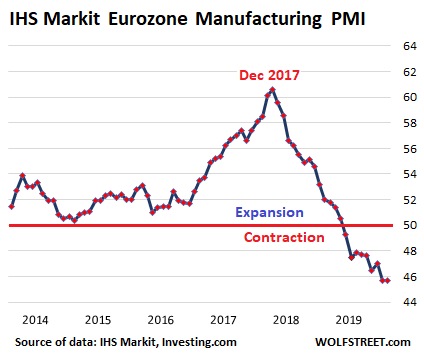 Even as Germany is slithering down the slope, manufacturing output in France, the second largest economy in the Eurozone, returned to growth mode: “A key divergence between France and Germany remained exports, with the former seeing modest growth in new business from abroad while Germany’s exports remained in steep decline,” the report said.

The China Manufacturing PMI, released by China’s National Bureau of Statistics, remained in contraction mode in October (49.3) for the sixth month in a row. Particularly ugly is the steep multi-month plunge in export orders (red line): 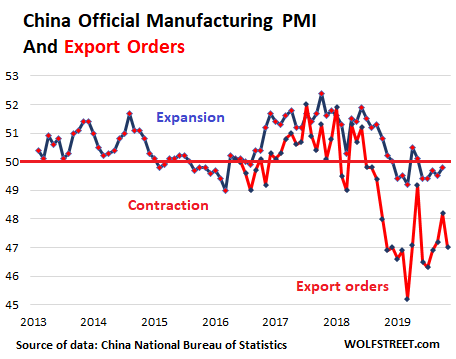 But whiplash. The private-sector Caixin China General Manufacturing PMI showed accelerated growth (51.7), the third month in a row of growth, and the fastest growth since February 2017. Production rose. New orders grew at the fastest rate in over six years as domestic demand grew “solidly,” and new export orders bounced back into growth mode for the first time in five months. And yet, “staffing levels declined further, with the rate of job shedding quickening since September”: 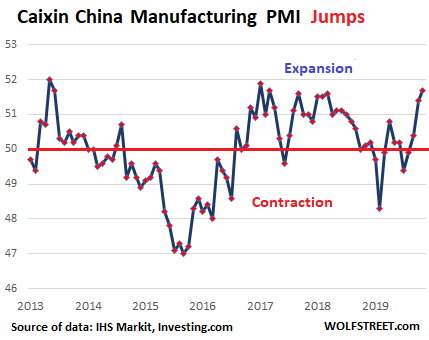 The export-focused manufacturing sector in Japan slid at the fastest rate in 40 months, according to the Jibun Bank Japan Manufacturing PMI, at 48.4 for October, contracting for the sixth month in a row. New orders were “the primary reason underpinning this marked decline,” with manufacturers reporting “the sharpest fall in demand since May 2016.” The “accelerated drop was broad-based across consumer, intermediate and investment goods”: 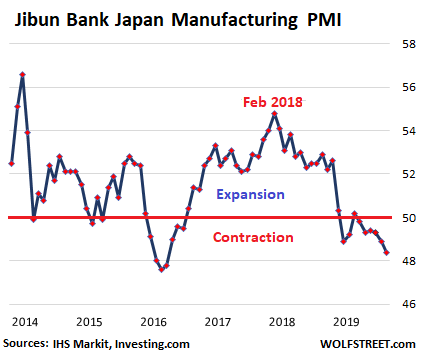 And a touch of German-like doom and gloom in the summary: “Although the impact of the typhoon will have temporarily interrupted factory operations in October, panelists reported unfavorable underlying conditions across both domestic and external markets. As such, downside risks to Japan’s manufacturing economy are clearly excessive. With weak regional growth across Asia and signs of fragility within the domestic economy, it is difficult to see any respite coming in the near-term.”

South Korea is in distant fifth place behind the big four manufacturing countries China, the US, Germany, and Japan. The executives of South Korean companies are a rather negative bunch, giving the IHS Markit South Korea Manufacturing PMI the peculiar look of a manufacturing sector shrinking much of the time since 2012 (with the majority of PMI values below 50). In October, the PMI of 48.4, while up a tad from September, signaled “challenging operating conditions.” 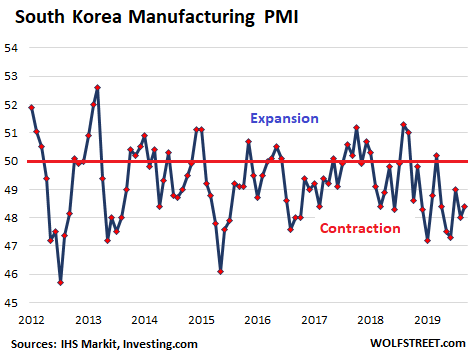 “The slump in exports remains the true Achilles heel,” the report said, “with headwinds coming from all directions. As well as US-Sino trade frictions, tensions with Japan and a stagnating European economy have significantly dented order book volumes at South Korean manufacturers.”

“Demand conditions across both domestic and external markets were weak,” the report said. To cut costs, companies continued to shed staff and reduce inventories. And to boost sales, they cut prices, without a lot of results.

76 comments for “Manufacturing in the US vs. China, Germany, Japan, South Korea”