Most other regions in the UK cling to price gains.

The average price has now fallen 6.4% from the peak in July 2017. The central areas of London have for years been among the most magnificent housing bubbles in the world, but the hot air is now decidedly coming out of the market: 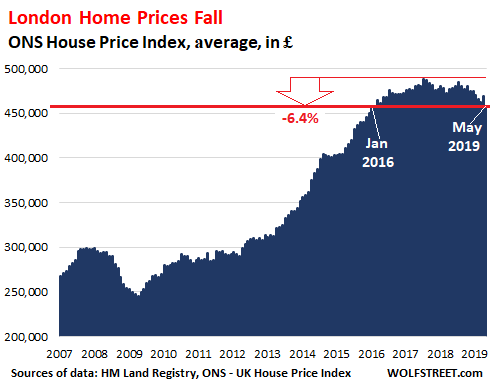 Unlike US home-price index providers, the ONS is not squeamish about calling its House Price Index what it really is: a measure of “monthly house price inflation.”

But these types of home-price declines prevailing in London have mostly not spread around the UK. A different picture emerges for each government office region and country. On a year over year basis, the House Price Index declined in only two of them: in London and the North East. Everywhere else, prices rose on a year-over-year basis: 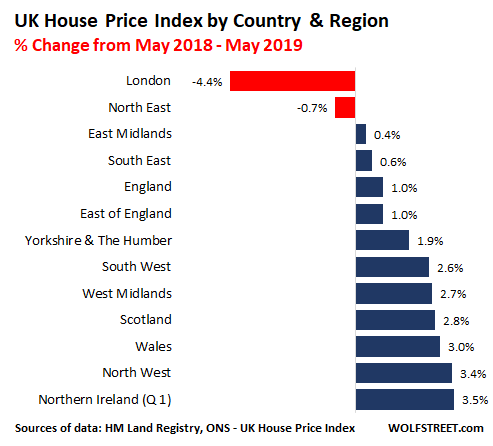 The long-term chart of England’s regions, with the fabulous London whale removed, shows some interesting splits: 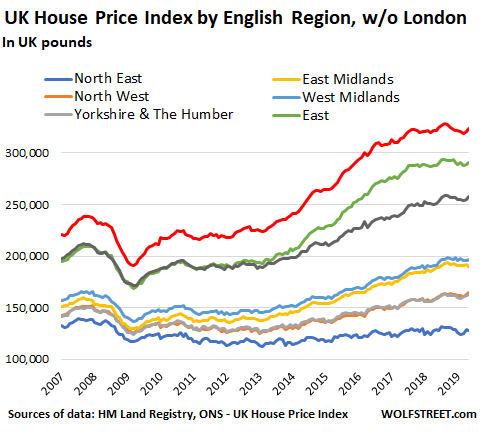 The North East (blue line tagging along at the bottom in the chart above) is the only region that has not yet reached its prior peak of 2008.

The North West and Yorkshire & The Humber (the two lines just above the blue line that are so close together you can barely keep them apart) have surpassed their 2008 highs, but only by a small margin.

The South East (red line at the top), the second most expensive region in England behind London (removed from the chart above), peaked in August 2018 but remains within a hair of that peak:

Overall UK home prices, after also peaking in August 2018, have inched down since then. On a year-over-year, they eked out a 1.2% gain in May, weighted down by the decline in the London housing market. May showed the lowest home price inflation, along with February, since January 2013 (by comparison, the UK’s consumer price inflation rose 1.9% through June): 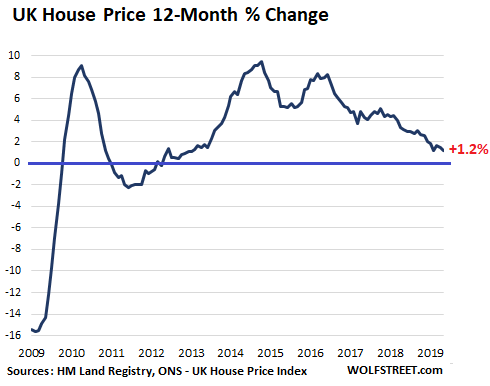 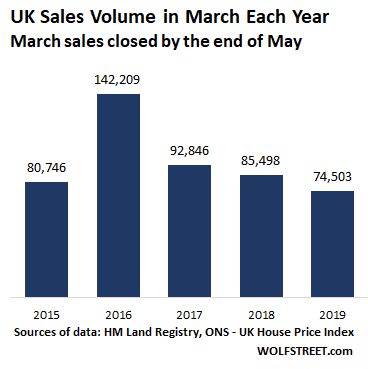 In Inner London, sales volume has plunged by 50% from the mid-range prevailing in the three years from mid-2013 to mid-2016. And it’s down about 65% from the peak in sales volume before the Financial Crisis. These numbers are very volatile from month to month. So, to smoothen out some of the sharp month-to-month ups and downs, I used a three-month moving average. At 2,057 transactions, sales volume has now fallen to levels not seen since the depth of the Financial Crisis in June 2009: 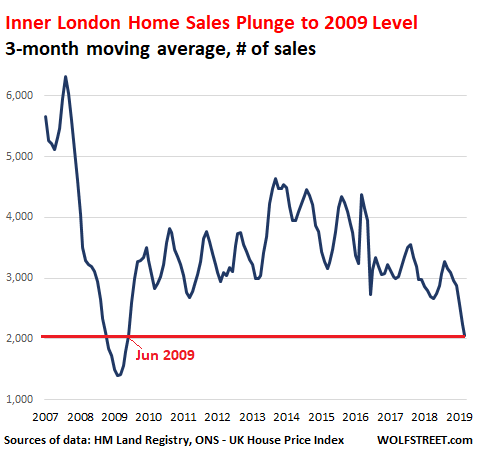 Prices and activity in London are subject to broader dynamics, and have been falling despite the ultra-low policy rate of the Bank of England. Leading up to the Brexit vote, the BOE had cut its policy rate to a historic low of 0.25%. It has since hiked this rate twice, to a whopping 0.75%. Currently, mortgage rates are among the lowest in the UK’s history. But the London housing bubble is deflating nevertheless.

Factors beyond interest rates have been piling up in the London housing market, particularly the simple but powerful factor that home prices had risen so far in past years that fewer and fewer people who live and work there can actually afford to buy a home there, despite low mortgage rates.

The problem of home prices outrunning what locals with even good jobs can afford stimulated the government over the past few years to act and, among other things, increase the stamp duty particularly on high-end property transactions. This, in addition to the uncertainties of Brexit, has pulled the rug out from under the blind enthusiasm of foreign investors.

The possibility that some of London’s finance industry might move to other parts of Europe after Brexit is also pouring cold water over the once hot market. That some hot air is now hissing out gives rise to hopes – and fears – that a modicum of sanity might gradually return to the market.