The real worry is the economy in the Eurozone.

The Dollar Index (DXY), which tracks the dollar against the euro, yen, pound sterling, Canadian dollar, Swedish krona, and Swiss franc, and which is dominated by the euro, jumped 0.83% to 97.71 at the moment, hitting at least briefly its 52-week high, as the euro slumped 1.1% against the dollar, following the ECB’s announcement earlier today. But it wasn’t just a one-day event for the dollar, but an eight-day rally in an uptrend that started in early February (data via Investing.com): 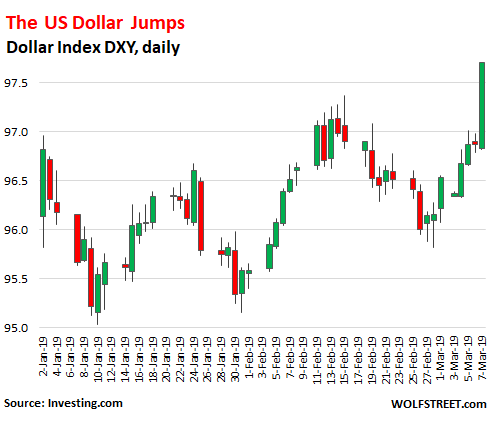 The real worry is the economy in the Eurozone – despite the fabulous stimulus the ECB has heaped on it for years, including a brutal negative-interest-rate policy and massive QE that has inflated the ECB’s balance sheet to over 40% of Eurozone GDP (by comparison, the Fed’s balance sheet is down to 19.5% of US GDP).

The Eurozone economy is deteriorating rapidly. In the post-meeting press conference today, ECB president Mario Draghi announced that the ECB had slashed its economic growth forecast for the Eurozone to 1.1% for 2019, a sharp cut from its forecast of 1.7% growth at the December meeting, and down from its 1.9% growth forecast last summer.

“Incoming data have continued to be weak, in particular in the manufacturing sector, reflecting the slowdown in external demand compounded by some country and sector-specific factors,” the statement says.

Instead of admitting that its radical experimental monetary policies were a colossal error as the economic growth is now dwindling despite or because of the stimulus, and instead of gradually raising its policy rates above the rate of inflation to end its brutal “financial repression,” and instead of shedding the bonds on its balance sheet to push up long-term interest rates and force a restructuring of the bogged-down European economy so that it would liquidate or restructure the debts of zombie companies and lighten the load of restructured companies to allow them to have a fresh start – all of it at investors expense – the ECB does the opposite.

It promises new bank liquidity programs in the Eurozone which is already drowning in central-bank liquidity, to get banks to lend more to these zombie companies and keep them from restructuring their debts.

These targeted longer-term refinancing operations (TLTRO-III) are loans by the ECB to banks at a rate indexed to the ECB’s “main refinancing operations” rate, which is currently 0.0%. The idea is that banks would lend this free money aggressively. In the past, banks used these loans to aggressively buy the government bonds of their countries, such as shaky Italian banks buying shaky Italian government bonds, and collecting the difference while getting everyone worked up about this “doom loop.”

There will be unspecified incentives in these programs to discourage this type of thing, but good luck. The loans would start in September 2019 and end in March 2021, with maturities of two years.

But the last thing the Eurozone needs is more liquidity after having been doused with ECB liquidity. The negative-interest-rate policy and QE have repressed yields and have made dirt-cheap credit available to just about all comers. So the problem in the Eurozone is not a lack of cheap credit.

The ECB has named this program “TLTRO-III” because it’s the third such creature of liquidity injections since 2014.

But at least pushing the ECB’s deposit rate further into the negative and restarting QE are off the table. There appears to be no appetite for them.

Markets were spooked – instead of levitating due to the promised bank liquidity programs. Stocks in Europe sold off, particularly European banking stocks, with the shares of favorite piñata Deutsche Bank – now, there’s something that needs to be cleaned out at investor expense – dropping 5.1% (to €7.75) since the announcement earlier today. The Stoxx 660 bank index, which includes banks outside the Eurozone, fell 1.1%.

The dollar index, against this background, jumped to its 52-week high, a sign that the US economy, including its manufacturing sector, is currently seen as the “cleanest dirty shirt” among the major economies.

More and more voices, including those from current and former Fed governors, are trying to prepare the markets for a Fed rate hike or two later this year — or one later this year and one next year. Yes, they say, the economy hit a soft patch in Q1 due to the government shutdown, delays and lower tax refunds, and some other factors, and Q1 GDP will be lousy. But these voices warn markets that the pace will pick up in Q2 and Q3 to a decent but not exhilarating pace, and that in this environment, the Fed isn’t quite done yet with its rate hike cycle.

That the dollar has been building up momentum since early February and is now at a 52-week high against the DXY basket of currencies is a sign that at least the currency market isn’t totally dead set on a dovish U-turn at the Fed.

46 comments for “US Dollar Hits 52-Week High in Cleanest-Dirty-Shirt-Syndrome on New ECB Stimulus, as Old ECB Stimulus Fails to Stimulate”