Something has to give.

Starting to be a fascinating phenomenon: Rates charged by trucking companies and other transportation providers continue to surge on a year-over-year basis even as the volume of shipments has dropped below where it had been a year ago, while the “capacity squeeze” of 2018 has disappeared, and as the price of fuel is down year-over-year.

Freight shipment volume across all modes of transportation – truck, rail, air, and barge – in January ticked down (-0.3%) from January last year, according to the Cass Freight Index, the second year-over-year decline in a row. Those two declines are the first since the transportation recession of 2015 and 2016. The extraordinary plunge since the extraordinary peak in shipments last summer indicates that the transportation boom with its double-digit year-over-year increases has fizzled. This chart shows how freight volume changed from the same month a year earlier: 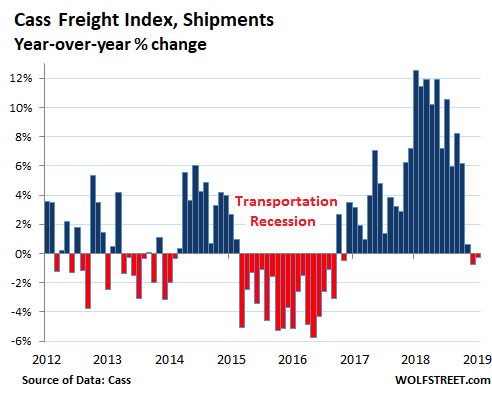 The Cass Freight Index covers shipments of merchandise for the consumer and industrial economy via all modes of transportation, but it does not include bulk commodities, such as grains or chemicals.

The year-over-year comparison in the chart above – for example, comparing January 2019 to January 2018 – eliminates the noise caused by the hefty seasonal fluctuations of the transportation business that occur every year.

But the chart also delineates the notorious cyclicality of the transportation business, where some big up-years are followed by down-years, such as the drop in shipments during the “transportation recession” of 2015 and 2016, when the goods-based sector of the economy itself went into a recession, and only the strength of the service economy kept GDP growth positive (at a miserably low 1.6% in 2016). The transportation recession was followed by a historic surge in shipments from late 2017 through the first half of 2018, causing a capacity squeeze that triggered a lot of hand-wringing among shippers, such as retailers and industrial companies. That boom and capacity squeeze have now been unwound.

This capacity squeeze in the trucking industry, and the subsequent resolution of it, shows up in the DAT Load-to-Truck ratio which tracks the demand-capacity balance. This ratio for “vans” – the trailers that Class-8 trucks haul across the US – surged twice in 2018: First, the spike in January 2018, when use of Electronic Logging Devices (ELDs) became the law, which caused a temporary squeeze as truckers had to rejigger their operations; and then, the flood of demand in the summer blew the ratio out again. But the demand-capacity balance is now reverting to the mean: 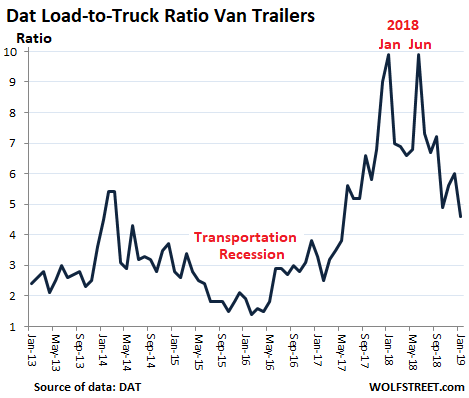 A good portion of the equipment and supplies for the industrial sector – manufacturing, oil & gas drilling, construction, mining, etc. – is transported by flatbed trailers. Demand for flatbed trailers skyrocketed in early 2018 as capacity suddenly tightened under the pressure that ELDs put on the industry, while demand was strong. DAT’s Load-to-Truck ratio experienced a historic spike from January through April 2018, then reverted to the mean and overshot the mean on the way down: 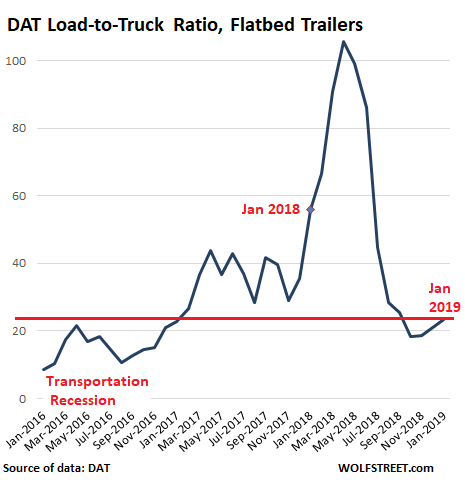 Rising capacity and declining shipments, no problem: Freight rates continue to surge. In January, the Cass Truckload Linehaul Index, which tracks per-mile full-truckload pricing and does not include fuel or fuel surcharges, rose 6.4% compared to January 2018. But that year-over-year increase in truckload pricing is backing off from the double-digit spikes last summer: 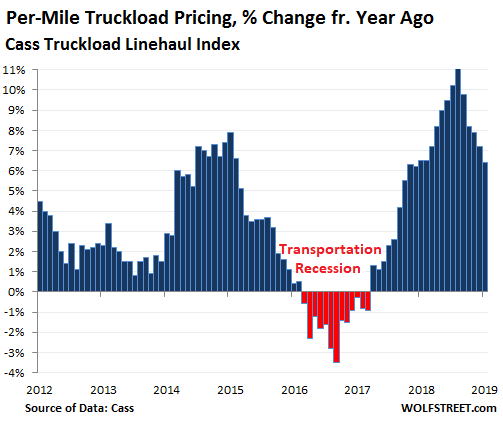 The average diesel price at the pump in January was slightly down from a year earlier, according to EIA data.

Yet the Cass Intermodal Price Index, which includes diesel prices and fuel surcharges, still rose 6.8% in January, compared to a year ago — but a far cry from the six double-digit year-over-year increases in a row last year.

Intermodal freight in the US is a combination of truck and rail, such as containers hauled by truck and then transferred to rail, or semi-truck trailers that piggyback on special rail cars. The chart below shows the blistering price increases in 2018 and continuing through January 2019, even as fuel prices are faltering: 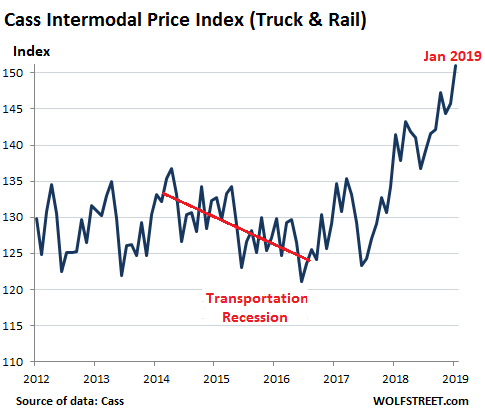 In terms of overall expenditures for freight: For all modes of transportation combined – truck, rail, air, and barge – shippers spent 7.8% more in January to get their goods delivered than they’d spent a year ago, despite the decline in shipments, according to the Cass Freight Index for Expenditures. This increase in freight spending was caused by the continued though somewhat slower price inflation in transportation services.

In the stacked chart below, where each line represents one year, January 2019 is way above all prior Januaries. Note the seasonality: January usually marks the low point of the year! The year 2018 (black line, on top) was an outlier in the bunch. And January 2019 is an even further outlier: 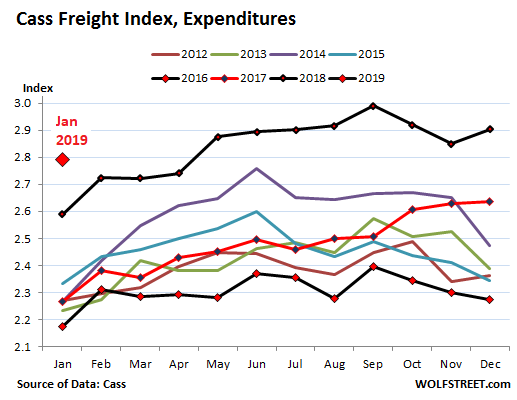 The above chart shows what inflation in “transportation services” looks like: even as shipments decline, shippers such as retailers and industrial companies, are having to pay a lot more to get their goods to the destination. But this too has started to back off just a tad from the red-hot pricing environment last year.

Ultimately, something has to give: in an environment of weaker shipments and more capacity, freight rates cannot continue to surge.

And given the rising capacity, and the declining shipments, trucking companies have backed off their historic binge of ordering Class-8 trucks. In January, orders for these trucks plunged by 58% from a year ago, to the lowest level since October 2016, toward the end of the “transportation recession” when Class-8 truck orders had plunged to the lowest levels since 2009, and truck and engine manufacturers responded with layoffs. So that U-turn was fast, even for the legendarily cyclical trucking business. Read… Phenomenal Trucking Boom Ends, Trucking Bust Starts