So, how hot is the Chinese Renminbi? And is the euro dead yet?

The US dollar’s role as global reserve currency is defined by the amounts of US dollar-denominated assets – US Treasury securities, corporate bonds, etc. – that central banks other than the Fed are holding in their foreign exchange reserves. To diminish the dollar’s role as a global reserve currency, these central banks would have to dump the dollar.

So, let’s see. Total global foreign exchange reserves, in all currencies, came in at $11.4 trillion in the third quarter, according to the IMF’s data on “Currency Composition of Official Foreign Exchange Reserves” (COFER), released this morning. The amount of USD-denominated exchange reserves was $6.63 trillion. This amounted to 61.9% of total foreign exchanges reserves held by central banks, the lowest since 2013: 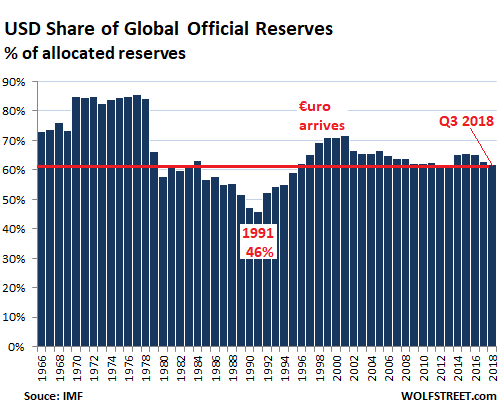 The euro replaced a gaggle of European currencies that had been held as foreign exchange reserves, on top of which was the Deutsche mark.

In Q3, the euro’s share rose to 20.5%, the highest since Q4 2014. The creation of the euro was an effort to reduce the dollar’s hegemony. At the time, the theme was that the euro would reach “parity” with the dollar. But the euro Debt Crisis ended that dream.

The other major reserve currencies don’t have a “major” share. The combined share of the dollar and the euro, at 82.4%, leaves only 17.6% for all other currencies combined. The two currencies with the largest share in that group are the Japanese yen, at 5.0%, and the UK pound sterling, at 4.5%.

And the Chinese renminbi? On October 1, 2016, the IMF added it to its currency basket, the Special Drawing Rights (SDR). This elevated it to a global reserve currency. Some people thought, or hoped that, being the currency of the second largest economy in the world, it would dethrone the dollar’s status as hegemon. The process is sputtering along. The RMB’s share, after jumping nearly half a percentage point to 1.84% in Q2, has now inched down to 1.80% in Q3.

In the pie chart below, the RMB is the thin red slice – minuscule, given the size and globalized nature of China’s economy. Central banks remain less than enthusiastic about holding RMB-denominated assets: 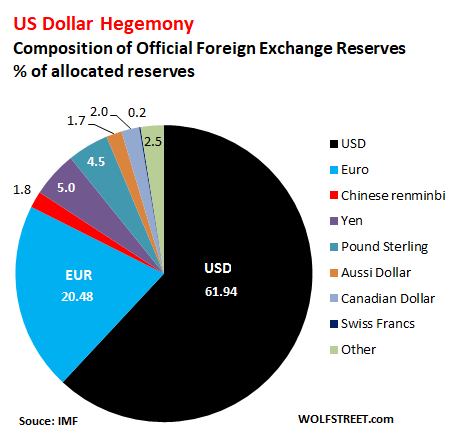 The Swiss franc, the barely visible black line in the pie chart above, is becoming more irrelevant in this lineup, as its share has now dropped to 0.15%, though it plays an outsized role in the currency-trading sphere: 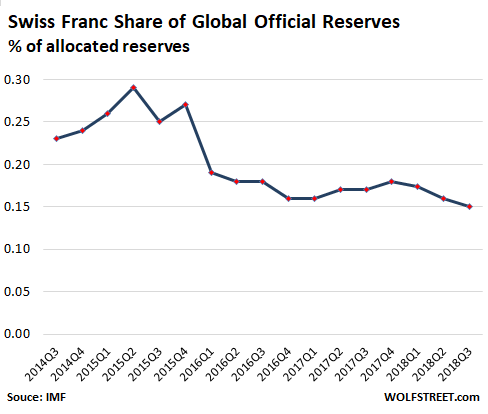 The chart below shows the major reserve currency trends over time. The US dollar’s share (black line at the top) of reserve currencies has edged down. The euro (blue line) has been vacillating at around 20% for years. The Chinese RMB is the bright red line at the bottom as of its inclusion in the SDR basket. It’s above the Swiss franc and sandwiched between the Australian dollar and the Canadian dollar: 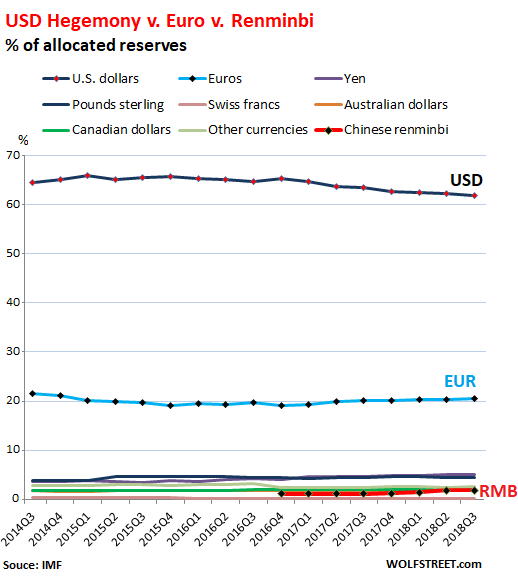 However, the fact that the dollar is still the top reserve currency and top international funding currency allows for those trade deficits to be financed easily, and this has made those trade deficits possible over the past two decades. There is no telling for how long this can continue without causing some sort of never-before-seen financial mess. But that moment isn’t on the horizon yet.

115 comments for “US Dollar Status as Global Reserve Currency?”