And it sure took a looong time.

Palladium, a soft silver-white metal used largely in automotive catalytic converters but also in many other applications including dentistry, spiked to an all-time high today, at the moment I’m writing this, to $1,143 per ounce in the spot market (historic data via Macrotrends). 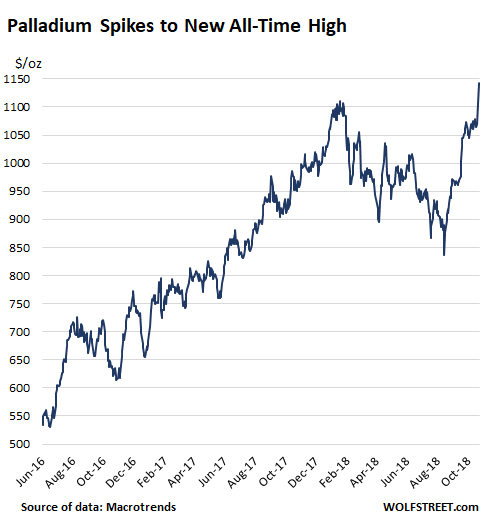 The prior all-time high was $1,126 on January 4, 2018. From June 2016 through January 4, 2018, palladium had more than doubled. The story was that there were “fears of a supply crunch in recent months,” as the Financial Times posited back then. “Aided by a weaker dollar, which makes the metal cheaper in foreign currencies, strong global growth and a buoyant car market,” the FT wrote at the time.

Upon which the price of palladium plunged. By the end of July, it was down 22%. But since then it bounced again, and so here we are, with a new high.

If palladium drops again in a major way, the chart above will form an ugly double-top.

A double-top will be particularly ugly given the long-term look – going back 20 years – of palladium, with the January 2018 high having finally taken out the high of $1,083 of February 1991. In other words, it took 17 years to get there (chart via Macrotrends): 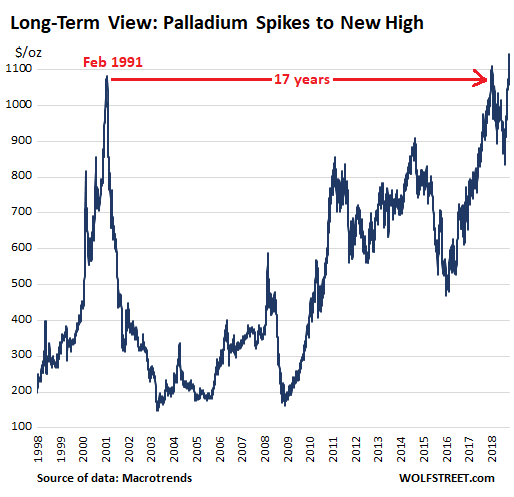 Globally, about 80% of palladium is produced by top producer Russia and South Africa. They’re followed by Canada and the US. Another source of supply is the palladium from recycled catalytic converters.

In terms of demand: About half of the palladium supply is used by the automotive industry in catalytic converters. That’s where the “mixed” part comes in.

Year-over-year, new-vehicle sales (in terms of deliveries, not dollars) have been declining in the US for two years; they started dropping sharply in China this summer; they’re down a smidgen in Canada so far this year; in the EU, sales inched up this year, but in September plunged 23%, which woke everyone up. So demand from the auto industry may not be that hot going forward.

And then there are electric vehicles. In terms of auto production, EVs are gradually making inroads, including in China, the largest market in the world. EVs are not using catalytic converters.

So I wouldn’t necessarily bet on a lasting supply shortage to drive the price much higher. And looking at the chart by squinting just right, I see something that makes me think that now might not be the perfect entry point to ride palladium all the way into the stratosphere.

33 comments for “Palladium Spikes to All-Time High: The Long View”