“This emerging trend highlights just how much risk some investors are willing to take in the current environment.”

The Fed’s explicit purpose of “removing accommodation” – hiking interest rates and unwinding QE – is to tighten the ultra-loose “financial conditions” that have prevailed for the past nine years. By tightening “financial conditions,” the Fed is trying to bring markets “gradually” – rather than all at once – back to earth: higher yields, wider spreads, higher risk premiums, etc. By definition, this entails lower asset prices for investors and more expensive and harder to get credit for borrowers, particularly at the riskier part of the spectrum. But for now, the strategy is not working.

The longer the Fed’s strategy is not working, the longer the Fed will raise rates, and the higher the risks will be that, instead of working “gradually,” as the Fed always says, its strategy is going to work belatedly but all of a sudden – which would make for a brutal surprise.

Just how widespread is this? Take asset-backed securities (ABS) backed by subprime auto loans. Subprime auto-loan defaults in March hit the highest level since 2008 though they’ve backed off some. These structured securities have tranches with different credit ratings. At the time they’re issued, the tranches may range from AAA to deep-junk B. The lowest-rated tranches would take the first loss, and rising default rates make those B-tranches very risky. Normally, the specialized subprime lenders will retain the lowest rated slices because investors have no appetite for them. But even that is changing.

A wider spread in yield – the risk premium – is supposed to compensate investors for the additional risks they’re taking. But those risk premiums at the riskiest end of the market are fading.

“We think this emerging trend highlights just how much risk some investors are willing to take in the current environment,” analysts at Kroll Bond Rating Agency (KBRA) said in their midyear outlook report, cited by Bloomberg. The amounts of these B-rated slices that are being sold are still relatively small – $197 million were sold in the first half, according to KBRA – but that’s up from zero last year.

By contrast, in the broader bond market, the highest rated corporate bonds, AAA and AA, have seen their prices fall and their yields rise sharply since mid-2016. The chart below shows the average effective yield of AA-rated bonds, currently at 3.46%, up from the 2.1%-range in mid-2016 when the Fed was in its final throes of flip-flopping before it turned into a tightening machine: 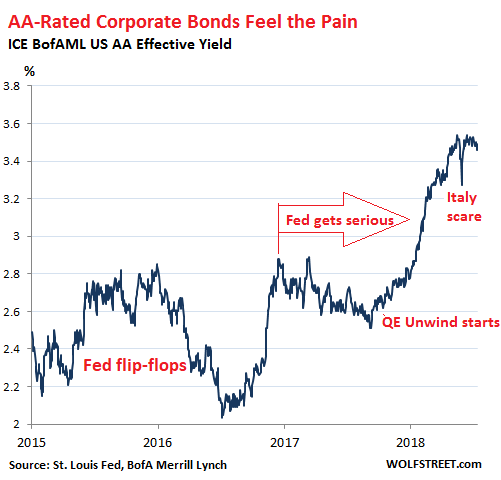 At the same time, prices of the lowest rated junk bonds, CCC-rated and below, have risen and yields have dropped. These bonds carry the highest credit risks, ranging from “substantial credit risk” to “default imminent with little prospect for recovery” (here’s my ratings cheat sheet for the three major US ratings agencies). The average effective yield of 9.92% is down half a percentage point from where it was a year ago, and down massively from 2016: 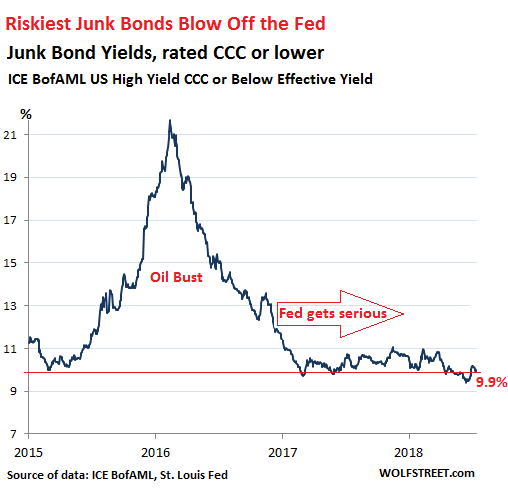 The Financial Stress Index, released weekly by the St. Louis Fed, tracks these sorts of developments – the “financial conditions” that companies face in the markets. The index reached record lows in November, indicating that there was extraordinarily little “financial stress” in the markets after years of ultra-easy monetary policies. The index then ticked up from January through March but has since started to revert to stress-free nirvana.

But the two-year Treasury yield, which is very responsive to monetary policy, is a leading indicator of financial stress in the credit markets, but with a fairly long lead time. Its has spiked to 2.59%. It shows the direction in which the financial stress components – such as junk bond yields, spreads, and risk premiums – will move. 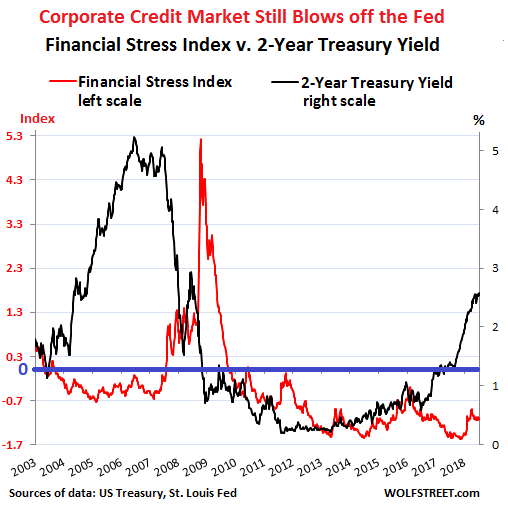 The chart also shows the lag in the current cycle between the two-year yield, which has been rising higher since 2016, and the expected tightening of the financial conditions, a process that hasn’t really begun yet.

Broader markets are notoriously slow to react to a shift in monetary policies. But when they do finally react, the adjustments in asset prices, yields, and credit availability can be sudden and eye-popping, as amply demonstrated last time. This time, the Fed is hammering home the theme of “gradual,” in the hope that markets will adjust “gradually” over years, and not all of a sudden in an ugly moment of reality, as they had done during the Financial Crisis.

In the same vein, “reverse-yankee” junk bond issuance just hit a record. Read…  NIRP Did It: I’m in Awe of How Central-Bank Policies Blind Investors to Risks

29 comments for “As Risks Balloon, Yield Chasers Blow Off the Fed”