This is the brick & mortar part of e-commerce.

Commercial real estate prices peaked in August 2017 at 27% above the crazy peak of the prior bubble, according to the Green Street Commercial Property Price Index (CPPI). By April this year, the index was down 1.4% from the peak and by about 1% from April a year ago.

The chart of the year-over-year changes of the CPPI shows the gentle down-trend since September last year. But it hides the turmoil beneath the surface, with the subsector for malls plunging 16% from its peak at the end of 2016 as brick-and-mortar retail is melting down, and with industrial — which includes warehouses, the brick-and-mortar component of e-commerce – soaring 11%: 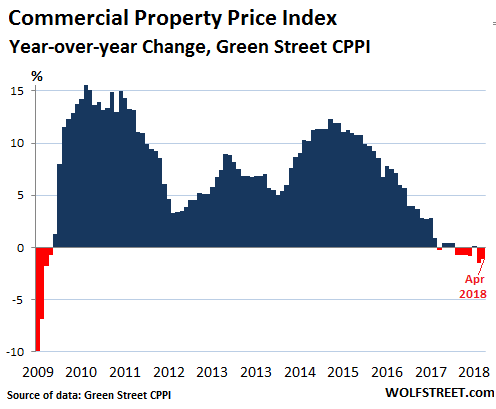 The industrial segment has been hot around the country, particularly in large urban areas, such as the San Francisco Bay Area, New York-New Jersey, or Seattle, where warehouse capacity is tight amid high demand. And rents for industrial space have been soaring.

So here are some of the dynamics of industrial properties in greater Silicon Valley, based on data provided by the research team at Transwestern, a national commercial real estate firm.

The total inventory of industrial space in greater Silicon Valley inched up to 192 million square feet in the first quarter of 2018. But vacant inventory, offered by landlords directly and by companies that no longer need it and thus try to sublet it, fell to 11.4 million square feet, or to 5.9% of the total, a historic low.

Investment and leasing activity among Silicon Valley tech giants was very robust in the first quarter, as Google continued to buy industrial space in San Jose, and Facebook made its big move into Fremont after signing a notable lease in the previous quarter. In all, tech giants’ activity is keeping momentum in the Silicon Valley industrial market.

Under these conditions of tight supply, robust demand, and few vacancies, landlords can raise rents, and so rents are jumping from historic high to historic high.

In the first quarter, new supply of industrial space was scarce: only 22,000 square feet was added. But more will come on the market, with 1.1 million square feet under construction. Transwestern provides some details:

Transwestern sees this new construction as adding “some relief to a market that is showing no signs of cooling off.”

These trends in industrial real estate are playing out across the country. So even as many retail properties are getting into serious trouble due to the attack from e-commerce, and some are becoming essentially useless for retail and have to be repurposed or redeveloped into something else, it’s the brick-and-mortar side of e-commerce – lowly warehouses and fulfillment centers – that has become the hottest trend in commercial real estate.

But the Fed’s QE Unwind is already ramping up toward cruising speed to bleed oxygen out of the markets. These are getting to be serious amounts. Read…  Fed’s QE Unwind Accelerates Sharply

37 comments for “As Malls Melt Down, Industrial Properties Heat Up”