The crypto-crash crushes hopes, but will it impact the economy?

The price of cryptocurrency Ripple had been languishing for months at around $0.20 back in 2017, giving it an already astonishing market capitalization of around $8 billion. But on December 11, it took off. In the morning of December 14, the price blew through $0.574, and the market cap passed $22.5 billion on the way to a quadrillion. A serious gain, but peanuts compared to what came next.

Crypto billionaires were being printed by the week and crypto millionaires by the hour. Ripple was hot. All the known schemes were piled on to manipulate the price up. Hedge funds put their money to work and got the media to carry their water. The pump operations were white-hot, and it all worked according to script.

Our hero had $70,000 in Ripple before December 11, and then went on a tour into the rain forest without any connection to the rest of the word. He returned to the US and got off the plane bleary-eyed at 5 a.m. on January 4, got a quote on Ripple, and discovered it had made him a millionaire.

That’s one heck of a feeling. A huge adrenaline shot. His brain started working in mysterious ways. On the way home, he figured that in another 24 days, he’d be another 1,400% richer than at the moment, which would be $15 million; and in another 24 days, or at least no later than Easter, if there was a brief correction, which could happen, realistically speaking, he’d be another 1,400% richer, and that would take him to a quarter billion. He’d be a billionaire by the end of 2018, conservatively speaking. Those thoughts kept him from selling.

But by the end of that fateful January 4, his initial million had started to melt away. Ripple had dropped to $3.16, having shed $16 billion in market cap. And this was just the beginning. On February 5, Ripple hit $0.66, down 82%. And it wasn’t through yet.

These things happen. All along the way, our hero had hopes for another spike, and he clung to his digital stash, although it wasn’t worth all that much anymore, and he clung to the dream of the quarter billion, but that had been moved from Easter to 4th of July – or Labor Day at the latest.

This was a perfect round-trip. It created $126 billion in “wealth” – that’s how the recipients looked at this phenomenon – on the way up from December 14 to January 4, and then destroyed the same $126 billion on the way down. The whole thing took 15 weeks. This chart (via CoinMarketCap) shows the amazing round-trip. Note how volume (black columns at the bottom of the chart) has now dissipated: 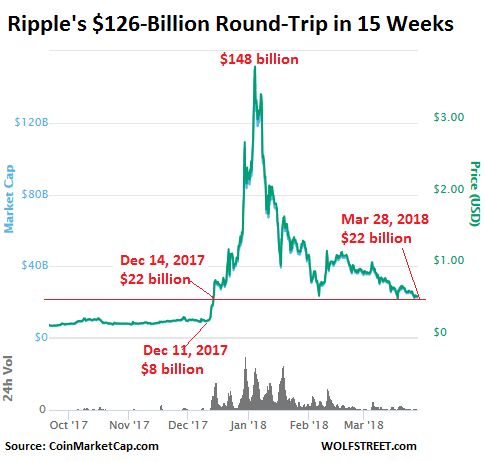 I have pooh-poohed cryptos on the way up, and on the way down. They’re at best a form of unregulated online gambling. Early movers win if they choose the right moment to exit. This comes at the expense of late entrants and those that are hanging on. And so be it.

But put yourself in the shoes of our hero who had become a millionaire and was on the way to becoming a billionaire. Now he’s stuck, and his stake is dwindling away, unless he lost it all when the exchange where he kept it was hacked.

This is a terrible feeling. The things our hero was planning to do and to buy have moved out of reach. Now he’s hunkering down, spending way too much time in his crypto echo-chamber on the internet, grappling with where to go from here, while keeping his hope alive that these cryptos will surge again and will finally make him rich.

So how big a problem is this for the economy?

During the dotcom bust, the Nasdaq index lost 78%. It took over two years and impacted the economy mildly. A recession followed. Many of the biggest dotcom highfliers no longer exist. But it was the Internet and there was a huge amount of use and need for it. And some of the big companies around today emerged from it, including Amazon and Google. However, there is no known use or need for these cryptocurrencies, other than online gambling. In this respect, there is no comparison between the dotcom era and crypto-craze.

Anyone can create a cryptocurrency. There are 1,595 by now, according to CoinMarketCap. The combined market cap of cryptocurrencies reached $707 billion on January 4, but has now plunged 58% to $297 billion — even though the new cryptos or tokens that are being created add to the market cap.

So $410 billion in perceived “wealth” has evaporated. But this is spread around the world, and if it goes to zero, it still won’t have much impact beyond those folks whose hopes have gotten crushed. For the rest, it is clear that the nonsensical nature of these things inevitably leads to nonsensical results. And that’s what we’ve been witnessing right before our eyes.

When will investors get tired of feeding their capital into this cash-burn machine? Read… Tesla Gets Slammed by Tesla