Treasury yields don’t matter – until they do. Mortgage rates jump.

On Friday at around 1:40 p.m., during whiplash-inducing market moves, the S&P 500 index was down 1.9%, bringing the total loss for the week to 8.3%, which would have been the biggest weekly loss since November 2008, after the Lehman bankruptcy.

Everyone has their own reasons why stocks plunged last week. Some blamed algorithmic trading. Others blamed the short-volatility financial complex that blew up. More specifically, Jim Cramer blamed “a group of complete morons” who traded in this space. Others blamed the stratospheric valuations of stocks that had been rallying for eight years with only a few dimples in between, and it’s simply time to unwind some of those gains.

Whatever the factors might have been, rising bond yields certainly had something to do with it. They tend to hit stocks, eventually.

The three-month Treasury yield rose to 1.55% on Friday, the highest since September 11, 2008. Investors are beginning to price in a rate hike in March: 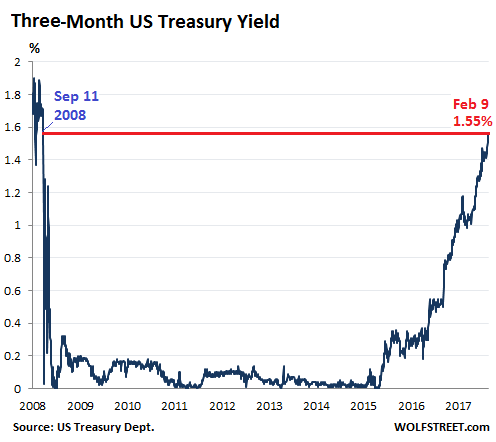 But the two-year yield, after having surged to 2.16% on February 1, got very nervous, dropping and bouncing during the week, and fell sharply on Friday, ending the week at 2.05%: 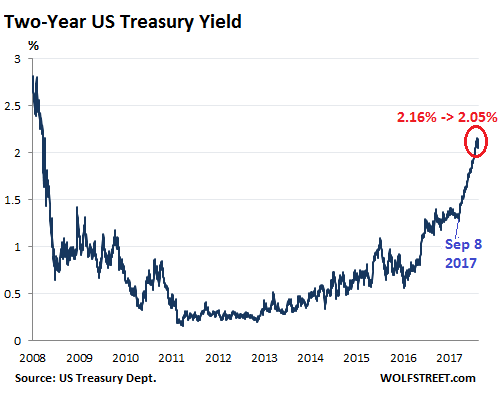 The 10-year yield closed on Friday at 2.83% and in late trading went on to 2.85%. The interesting thing about this is the difference (the “spread”) between the two-year yield and the 10-year yield. It surged.

This spread is one of the indications of the slope of the yield curve and was one of the most watched bond-data points during the scare last year over an “inverted” yield curve. This is a phenomenon where the two-year yield would be higher than the 10-year yield. The last time this happened was before the Financial Crisis. 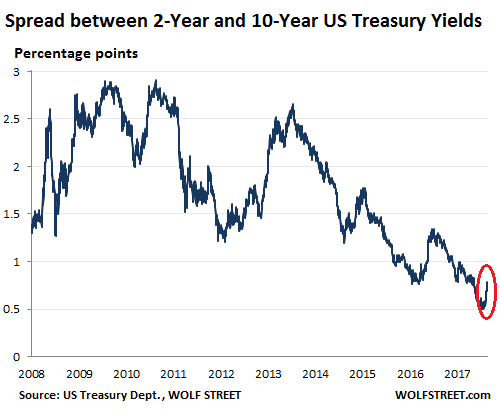 The 30-year yield rose to 3.14% on Friday. For the first time, it is now back where it had been on December 14, 2016, when the Fed stopped flip-flopping and started getting serious about raising its target range for the federal funds rate. The market responded to each rate hike with increases in short-term yields but defied the Fed on longer-term yields, which fell until September 2017.

The chart below shows the “yield curves” as they occurred on these four dates:

Note how the spread has widened at the longer-dated ends between the black line (December 29, 2017) and the red line (Friday), and how the slope of the red line has steepened, with the 30-year yield surging 40 basis points over those six weeks. That’s a big move: 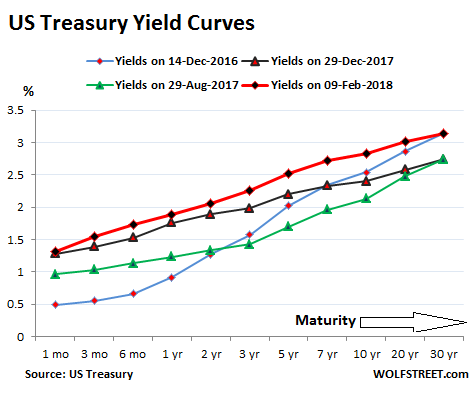 The average interest rate for 30-year fixed-rate conforming mortgages for top-tier borrowers rose to 4.5% on Friday – “with more than a few lenders up to 4.625%,” according to Mortgage News Daily. The costs of other consumer debt is also rising. Corporate borrowers too are facing higher costs of borrowing.

These higher borrowing costs also mean that investors are now seeing more attractive yields in bonds, and there is less pressure to chase risk. The stock market last week reacted fairly suddenly to what has been in the works for months. As they say, Treasury yields don’t matter to stocks – until they do.

How can the media be so gullible – and pliable? Read… What the Headlines about Tesla, Snap, and Twitter “Earnings” Should Have Said

89 comments for “What Crushed Stocks?”