But regulators are waking up.

Block.one, a software startup registered in the Cayman Islands and lacking a central office, has accomplished an astounding feat: So far, it has extracted $700 million in real money from the global public by selling tokens, called EOS, in an initial coin offering. It is by far the largest ICO ever.

An ICO is similar to an IPO, but here buyers got nothing other than the digital tokens – no ownership in the company (unlike what an IPO offers), no promises of any kind, no participation in anything, not even any fake promises of free future products. No matter how awesome and world-changing the blockchain platform or whatever the company might be developing might turn out to be, it won’t be connected to the tokens.

The purchase agreement that buyers in the ICO must sign states this very clearly and explicitly:

By comparison, with an IPO, investors actually end up with shares in the company. They become part-owners of the company.

The only thing buyers in this ICO got was the hope that the price of the token, given the current cryptocurrency mania, would surge by thousands of percent in the shortest time span – on the principle that the less people get, the more they’re willing to pay for it, and if they got nothing at all, they’d be willing to pay the most. Those hopes have been realized.

The price of the token has skyrocketed, though prices vary around the globe, depending on the exchange where EOS is traded. At the moment I’m writing this, on the top 10 exchanges by EOS volume, prices range from $9.67 at Bithumb to $8.54 at Binance.

In mid-October, the price was still in the 50-cent range. So to people who bought at the time, it doesn’t matter that they own not even one iota of the company or its world-changing technology platform or whatever because since mid-October the price has multiplied by 19. That’s all that matters (via Coinmarketcap.com): 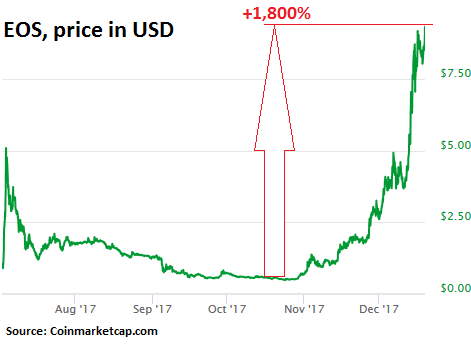 To pull off the mega-ICO, block.one “made a public relations splash, hosting numerous informational sessions, sponsoring post-conference receptions, giving out free t-shirts and even advertising on a Times Square jumbotron,” Coindesk observed. Its executives “have spoken at myriad conferences and met colleagues and potential clients at “meetups” in cities like London, Amsterdam, Singapore and New York,” the Wall Street Journal observed.

The sale of EOS has started in late June. And it’s not finished yet. Every day, block.com sells two million tokens via an auction process. According to Brock Pierce, a co-founder of block.com cited by the Wall Street Journal, the company plans to keep the ICO going until next June to raise “well north of” $1 billion.

But even at $700 million raised so far, this ICO is leagues ahead of the prior records:

The most recent class-action lawsuit, filed in the Tezos case a few days ago, stated:

In sum, Defendants capitalized on the recent enthusiasm for blockchain technology and cryptocurrencies to raise funds through the ICO, illegally sold unqualified and unregistered securities, used a Swiss-based entity in an unsuccessful attempt to evade U.S. securities laws, and are now admittedly engaged in the conversion, selling, and possible dissipation of the proceeds that they collected from the Class through their unregistered offering.

Practically anyone can sell tokens in an ICO. So far in 2017, 165 companies have raised more than $4 billion via ICOs, up from $226 million in 2016. Often, companies promise investors something of perceived value for their money, such as something for free down the road, other than ownership. It’s really more like a donation. The main thing is the digital token that can be traded for instant riches if enough buyers can be dragged out of the woods.

Regulators are just now beginning to wake up. A week ago, the SEC ruled Munchee’s $15-million token sale illegal and halted it. SEC Chairman Jay Clayton, still rubbing his eyes from having slept through much of the mania so far, warned “main street investors”:

The world’s social media platforms and financial markets are abuzz about cryptocurrencies and “initial coin offerings” (ICOs). There are tales of fortunes made and dreamed to be made. We are hearing the familiar refrain, “this time is different.”

Since the SEC started issuing warnings about ICOs in June, block.one has closed its ICO to residents in the US. China too cracked down recently on ICOs, and block.one also closed its ICO to residents of China. But cryptocurrencies are transnational, exchanges are everywhere, and people in China and the US who want to buy into the ICO can probably figure out how to do it.

Oh, and over the time that it took me to write this, EOS spiked another 23.8% on Bithumb, to $11.97. So it really doesn’t matter that it doesn’t convey any kind of ownership of the company or anything else, as long as it continues to surge exponentially forever.