Some big sectors are still resisting.

There is one sector in retail that is seriously booming: E-commerce sales in the third quarter jumped 15.5% from a year ago, to $115 billion seasonally adjusted, a new record, according to the Commerce Department this morning. This includes online sales by brick-and-mortar retailers. Over the same period, total retail sales increased 4.3%. And retail sales without e-commerce – an approximation for brick-and-mortar sales – ticked up only 3.1%, barely staying ahead of 2% inflation and 0.8% population growth.

The chart below shows the e-commerce sales boom on a quarterly basis (seasonally adjusted). Note the beating during the Great Recession. Not even e-commerce is recession proof. It was sharp. People just stopped clicking on the “buy” button. But it was short. By Q3 2009, e-commerce was setting records again: 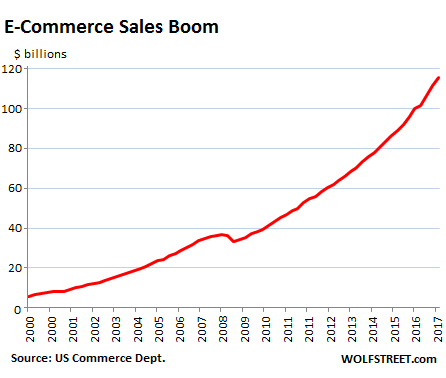 But how much of a danger is e-commerce to brick-and-mortar retail? Many observers keep pointing out that e-commerce accounts for only a tiny part of total retail sales. And that’s true. While growing rapidly, the numbers are still relatively small. In the third quarter, the e-commerce share of total retail was still just 9.1%, but that’s up from 8.2% a year ago. 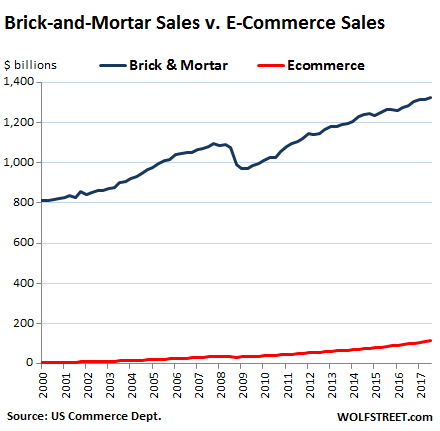 So is the “crushing” effect of e-commerce on brick-and-mortar overblown?

Not quite. There are several large brick-and-mortar sectors that are still considered “online-proof” or “e-commerce resistant.” They’re able to resist the encroachment of e-commerce because of the physical nature of their merchandise, state franchise laws that protect dealers, ingrained consumer preferences, and other factors. They are:

This may change in the future, but for now those sectors are holding out against online encroachment. Combined, they account for about 54% of total retail sales.

It’s the remaining sectors that are under attack – and those “under-attack” retailers are typically the stores that populate the malls. Department store sales, which peaked in 2001, have gotten crushed by e-commerce. Despite 16 years of inflation and population growth since then, department-store sales have plunged 35%: 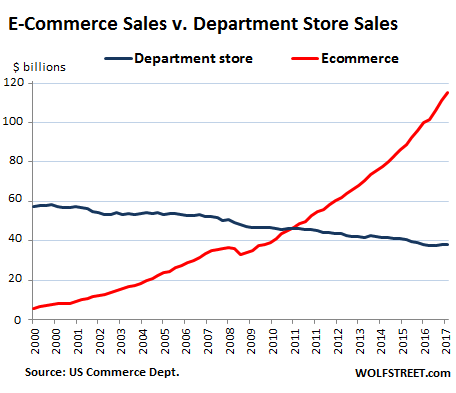 All the retailers combined that are under attack from e-commerce accounted for $565 billion in sales in the third quarter. That was up only 2.7% from a year ago – not quite keeping up with 2% inflation and 0.8% population growth.

But e-commerce sales increased by 15.5% over the same period. That difference in growth has been playing out year after year with brutal consistency. E-commerce sales have now reached 20.4% of those retailers that are not “online proof.” This chart shows the percentage of e-commerce sales compared to “under-attack” brick-and-mortar sales: 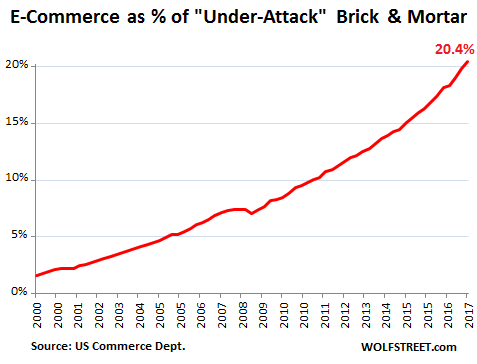 So the pressure from e-commerce is focused on less than half of total retail sales. Among the biggest losers are department stores and toy stores (31% of toy sales are already online). The fact that e-commerce still accounts for only 9% of total retail sales papers over the magnitude of the damage at malls where online sales exact their pound of flesh in ever growing measure on a daily basis, year after year.

Retailers that have not figured out how to build a powerful presence online, and have not invested in doing so, are catching the fallout. Their problems balloon if they don’t spend resources on masterful merchandising and perfect service at their brick-and-mortar stores. Every time a customer goes to the store and gets frustrated or disappointed, it’s another convert for e-commerce. Conversely, providing an exceptional experience at the store every time for every customer will stem the decline and perhaps even allow for growth.

But overall, this shift to e-commerce is a structural process. Nothing will stop it. At the same time – despite the 15+% year-over-year increase in e-commerce sales – the process is relatively slow. This isn’t an overnight phenomenon. It took 20 years to get this far, and it will provide for many more years of upheaval in the retail sector.

Finally time to make some easy money by betting on the collapse of certain brick-and-mortar retailers, years after it began? Here’s a grisly thought: As of today, there’s an ETF for that. Oh Lordy. Read…  Wall Street Discovers the Brick-and-Mortar Meltdown