They get debt slaves deeper into high-cost debts they can’t handle.

[Update, Nov 20, 2017. Did the Cleveland Fed come under pressure from the peer-2-peer lending industry after posting this data? It didn’t say, but I was contacted by a PR firm that referenced the Marketplace Lending Association (of which LendingClub, featured below, is a member) and informed me that the Cleveland Fed had pulled the report and posted this update on its site:

Since working paper no. 17-18 and related commentary on peer-to-peer lending were posted on our website on November 9, the authors have received several questions about the composition of the underlying data set they used in their analysis. In light of the comments received, the authors are currently revising their paper to further clarify the data sample they used in the study. Their revised paper will be posted as soon as it is completed.

Peer-to-peer lending commenced in the US a decade ago when investors – now mostly hedge funds, banks, insurers, etc. – could lend directly to consumers via online platforms. LendingClub, the dominant player, went public in December 2014. Shares shot up to nearly $30 over the first few days, but are currently at $4.20, after a 23% plunge last Wednesday when it slashed guidance, and after a 2.4% dive this morning.

Now the Cleveland Fed came out with an analysis that focused on the consumer end of the business, called the loans “predatory,” compared them to pre-Financial-Crisis subprime mortgages because they’re now showing very similar delinquency characteristics, and fretted what these P2P loans, given their double-digit growth rates, could mean for financial stability:

Based on our findings, one can argue that P2P loans resemble predatory loans in terms of the segment of the consumer market they serve and their effect on individual borrowers’ financial stability. The 2007 financial crisis illustrated the importance of consumer finance and the stability of consumer balance sheets.

Given these growth rates, “the P2P industry has the potential to destabilize consumer balance sheets,” the report said. “Consumers in the at-risk category – those with lower incomes, less education, and higher existing debt – may be the most vulnerable.”

And delinquencies have surged “at an alarming rate, resembling pre-2007-crisis increases in subprime mortgage defaults, where loans of each vintage perform worse than those of prior origination years.” 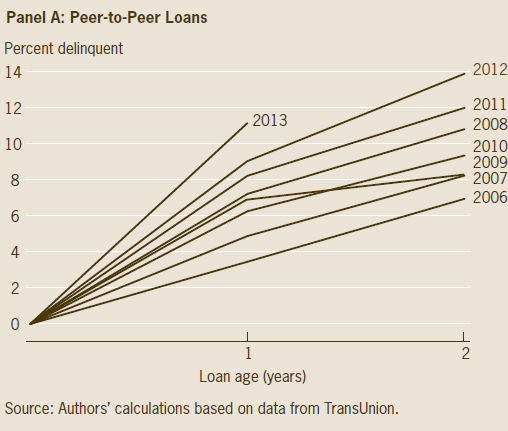 The chart below shows a similar pattern of rising delinquencies by vintage, but this one shows those from pre-Financial-Crisis subprime mortgages: 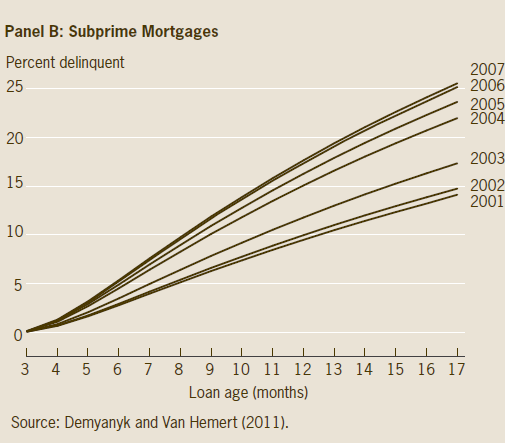 One of the most often cited benefits of P2P loans is the idea that consumers take out a fixed-term installment loan via a P2P platform to pay off their expensive credit cards, and keep their credit cards paid off, thus lowering their borrowing costs.

But rates vary, as they say.

At Lending Club, for example, P2P borrowers are categorized by grades A to D, reflecting the probability of default. On average, around 40% of loans are awarded a grade of A or B. These higher-rated borrowers are considered least the risky and are charged 8–12% interest rates. Borrowers with grades C or D tend to be riskier, and their annual interest rate can go as high as 30%. These interest rates do not compare favorably with credit card interest rates.

(I constantly marvel at the absurdity of having these kinds of double-digit interest rates on any consumer loans when the Fed’s target for the federal funds rate is only 1% to 1.25% and when banks pay next to nothing on deposits. But that’s how life is in our special post-Financial Crisis era).

If consumers use P2P loans to refinance more expensive credit card loans to lower their interest costs, then total debt balances of those consumers should remain the same or “if anything” decline, with cheaper loans replacing more expensive loans. But that’s not the case.

Instead, the report observed that total debt balances of consumers with P2P loans were increasing after the P2P loan origination year. It found that on average, within two years of the P2P origination year, balances of non-P2P debt had jumped by 35%.

And in a different way of looking at it, the report found: “P2P borrowers exhibit a 47% increase – rather than a decrease – in their credit card balances after obtaining P2P credit as compared to matched non-P2P borrowers.” 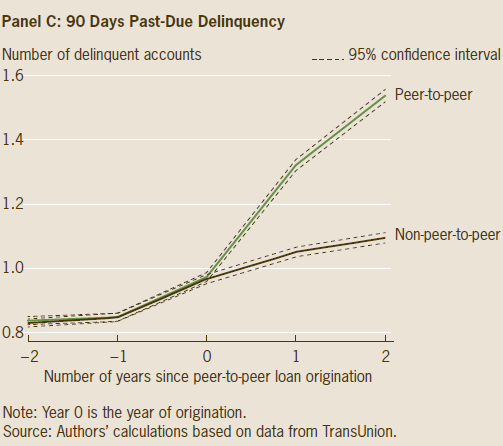 Which takes us to another point that is often hyped: “Do P2P loans help in building a better credit history?”

The answer is no. The report found that credit scores dropped “substantially and delinquency rates rise after taking on a P2P loan compared to non-P2P borrowers.” See chart above.

We also discovered that numerous measures of derogatory events (number of past due accounts – both revolving and installment – and number of bankruptcies) significantly increased for borrowers who took out P2P loans. These results indicate that P2P loans have the capacity to worsen borrowers’ prospects for future access to financing.

But consumer borrowing is what’s propping up consumer spending, which is what’s propping up US economic growth – and economic growth around the world. These debt slaves are our heroes. To keep them spending, and borrowing at usurious rates, credit card companies have some special deals for them. Read… How US Debt Slaves Get Trapped by “Deferred Interest”