USD-denominated debt outside the US hits record – even junk bonds.

China announced today that it would sell $2 billion in government bonds denominated in US dollars. The offering will be China’s largest dollar-bond sale ever. The last time China sold dollar-bonds was in 2004.

Investors around the globe are eager to hand China their US dollars, in exchange for a somewhat higher yield. The 10-year US Treasury yield is currently 2.34%. The 10-year yield on similar Chinese sovereign debt is 3.67%.

Credit downgrade, no problem. In September, Standard & Poor’s downgraded China’s debt (to A+) for the first time in 19 years, on worries that the borrowing binge in China will continue, and that this growing mountain of debt will make it harder for China to handle a financial shock, such as a banking crisis.

Moody’s had already downgraded China in May (to A1) for the first time in 30 years. “The downgrade reflects Moody’s expectation that China’s financial strength will erode somewhat over the coming years, with economy-wide debt continuing to rise as potential growth slows,” it said.

These downgrades put Standard & Poor’s and Moody’s on the same page with Fitch, which had downgraded China in 2013.

But the Chinese Government doesn’t exactly need dollars. On October 9th, it reported that foreign exchange reserves – including $1.15 trillion in US Treasuries, according the US Treasury Department – rose to $3.11 trillion at the end of September, an 11-month high, as its crackdown on capital flight is bearing fruit (via Trading Economics): 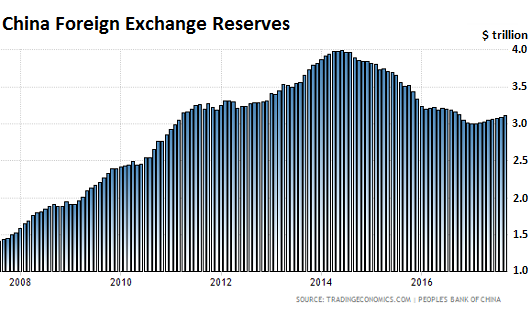 So why does China want these $2 billion in US dollars? For one, they’re still cheap, given the low yield, which is expected to rise as the Fed has started to unwind QE. And two, China might be interested in creating a benchmark for dollar-bond trading in China that could help set prices for Chinese corporate debt denominated in dollars. And there’s a lot of it.

Other emerging market governments and companies have jumped on the same dollar-bandwagon. Among them Tajikistan. It sold $500 million of 10-year bonds in September, its first foreign currency bond sale ever. S&P rated the bonds B-, six notches into junk, one of the lowest sovereign bond ratings out there. Yet at a yield of 7.125%, there was strong demand from European and US investors.

“Investors are very bullish on bonds from emerging markets and very keen to diversify into new names,” Peter Charles, a Citibank managing director who handled the bond sale, told the Wall Street Journal.

In June, even the Maldives, a minuscule nation of atolls in the Indian Ocean, was able to sell $200 million in five-year bonds with a 7% coupon.

Investors’ thirst for income is enabling governments and companies in some of the world’s poorest countries to sell debt at lower and lower interest rates.

Buyers reason that the debt pays a healthy yield and carries few immediate risks. The global economy appears robust and emerging-market defaults are low. Bankers say they expect emerging markets to sell tens of billions of dollars in new junk bonds by year-end.

The euphoria is worrying some investors, who warn that frenzied buying of risky assets sometimes presages market turning points. The average yield on speculative-grade corporate bonds in emerging markets dropped to 5.53% late last week, the lowest on record, according to J.P. Morgan. Two years ago, that yield was over 9%.

In previous times of market stress and economic weakness, junk bonds and emerging-market debt were among the asset classes that suffered sharp price declines as investors dumped riskier holdings for safer ones. The recent tightening in spreads raises questions about whether investors are getting adequately paid for the risk they are taking on.

Total dollar-denominated debt owed by governments and non-bank corporations outside the US has risen to a new record of $10.7 trillion, according to the Bank for International Settlements’ last Quarterly Review, cited by Krishen Rangasamy, Senior Economist at the National Bank of Canada, Economic Analysis. In the Emerging Markets, dollar denominated debt amounted to $3.4 trillion: 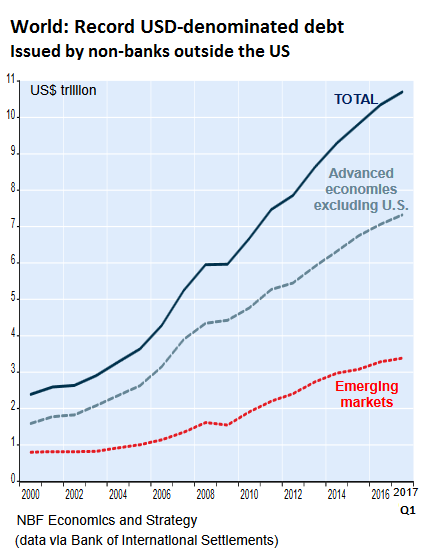 Dollar denominated debt owed by governments and non-bank corporations in advanced economies with currencies other than the dollar has reached 26% of their GDP, nearly three times the level of the year 2000.

Borrowing in foreign currencies increases the default risks. When the dollar rises against the currency that the borrower uses – which is a constant issue with many emerging market currencies that have much higher inflation rates than the US – borrowers can find it impossible to service their dollar-denominated debts. And when these economies or corporate cash flows slow down, central banks in these countries cannot print dollars to bail out their governments and largest companies. Financial crises have been made of this material, including the Asian Financial Crisis and the Tequila Crisis in Mexico.

But today, none of this matters. What matters are yield-chasing investors that, after years of zero-interest-rate-policy brainwashing by central banks, can no longer see any risks at all. And the dollar remains the foreign currency of choice.

Betting against the dollar remains a favorite sport. Read… The Hated Dollar Resurges. But Why?

61 comments for “De-dollarization Not Now”