Will Spain trigger Article 155 of the Constitution?

Unless concrete measures are taken to calm tensions between Madrid and Catalonia, one of Spain’s richest, safest and most visited regions could soon be plunged into chaos. With neither side willing for now to take even a small step back from the brink, the hopes of any kind of negotiated settlement being reached are virtually nil, especially with the European Commission refusing to mediate.

Since Sunday the Spanish government has even ruled out dealing with Catalonia’s president, Carles Puigdemont, and its vice president, Oriol Junqueras. In other words, the communication breakdown between Madrid and Barcelona is now complete.

But how did things get so bad in Catalonia?

The answer, to borrow from Ernest Hemmingway’s The Sun Also Rises, is “gradually, then suddenly.” While the standoff between Madrid and Barcelona has been on the cards for years, it’s been brewing so slowly that many people were caught off guard when riot units of Spain’s National Police and the Civil Guard began using brutal violence to prevent people from voting in Catalonia’s banned referendum.

Now, what we have on our hands is a full-frontal clash between two diametrically opposed nationalisms that has roots dating back centuries. The most recent tensions were inflamed in 2010, when Spain’s highly politicized Supreme Court, at the urging of the now governing People’s Party, annulled many of the articles of Catalonia’s recently agreed Statue of Autonomy, effectively stripping the agreement of any meaning. Gone was any chance of any fiscal autonomy. That this happened just as the Financial Crisis was beginning to bite in Catalonia hardly helped matters.

Since then, the Rajoy administration has refused to offer greater fiscal autonomy for Catalonia, or the chance to hold a legitimate referendum on national independence. The argument is always the same: the 1978 constitution forbids it from doing so and it can’t change the constitution, although the Rajoy’s party voted to change the constitution to enable Spain’s bailout of its savings banks while in opposition in 2011.

Catalonia’s regional government, the Generalitat, in the face of such intransigence and seeking to deflect public attention from the brutal austerity cuts it was making, began to take matters into its own hands. Little by little, disobedience became defiance, which gradually evolved into open rebellion.

The Generalitat created its own laws to allow it to hold a referendum on national independence as well as declare unilateral independence in the event of a large enough majority. It’s even set up a parallel tax system that has already enabled 145 state-owned companies to pay their taxes into Barcelona’s coffers rather than Madrid’s.

Now, the spirit of open defiance is spreading to the general populace. Since Sunday’s dreadful violence, local communities have begun locking out National Police officers from the hotels they were lodged in. The Catalan police and firefighters who fought under heavy blows to shield voters from the beatings of Spanish police officers on Sunday are also being applauded in the street.

On Tuesday, in protest at the police violence that marked Sunday’s vote, the Catalan government declared a general strike that brought the region to a shuddering halt. Over 50 major roads were blocked, public transport and shops were closed, fire-fighters and healthcare workers downed their tools and millions of Catalans flooded the centers of towns and cities.

Here’s what what I saw in Barcelona today: 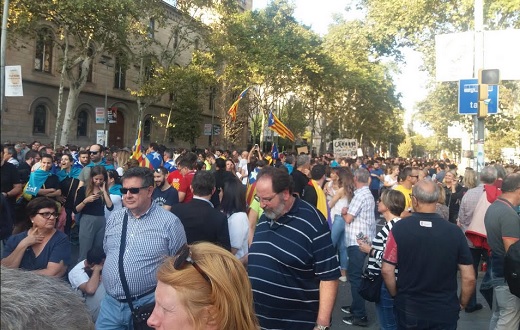 As always, the atmosphere was one of resolute but hopeful indignation. But as alone in Europe as Catalonia is right now, there is little reason for hope. And dashed hope can be a dangerous thing, especially in a region with depression-level youth unemployment (35%).

Even after the brutal attacks on voting stations by Spain’s National Police and Civil Guard on Sunday, the cards remain overwhelmingly stacked against Catalonia’s regional government. The EU refuses to mediate in the crisis, insisting time and again that it is an internal matter. Brussels must abide by the decisions of the Spanish government and Spain’s constitutional court, says Jean-Claude Juncker, the European commission president.

The King of Spain, Felipe VI, speaking in a televised address on Tuesday night, was no more conciliatory. Rather than offering the Catalan government an olive branch or even twig, he admonished it for its “inadmissible disloyalty” and called on the Spanish state to restore constitutional order in Catalonia.

The Rajoy administration will be happy to comply. For years it has been threatening to trigger Article 155 of the Constitution, which allows the central government to force a region to obey laws when disobedience “gravely threatens the general interest of Spain.” In the next day or two, it will no doubt get the chance.

The article has never been used and no one has a clear idea what its consequences would be. One glaring flaw in the plan, however, is that Catalonia’s government stopped obeying Spain’s constitution some time ago. Even after King Felipe’s stern warning tonight, Puigdemont continues to insist that he will declare unilateral independence in the coming days.

As such, for Madrid to unseat an elected regional government that no longer obeys it in a region where it has alienated over half of the local population, it will need a lot more manpower than it had on Sunday, especially if it follows through on recent threats to arrest Puigdemont and other Catalan politicians for sedition. And if the regional police force, the Mossos d’Esquadra, allies with the pro-independence parties, it will also need more firepower too.

And that could mean sending in the army. In other words, the once unthinkable — the sight of Spanish tanks rolling down Avenguda Diagonal and Gran Via — could soon become a reality, in 21st century Western Europe. But don’t worry: as the EU says, it will only be an internal matter. By Don Quijones.

It isn’t just about what happens on Sunday; it’s about the ensuing days and weeks. Read… Catalonia’s Dark Days Ahead

71 comments for “How Did Things Get So Bad in Catalonia?”