Extraordinary asset price inflation in all its beauty.

The term “housing bubble” to describe the housing market that peaked in 2006 and imploded with spectacular effects has been gradually fading out of use. The current theme is that years of asset price inflation have “healed” the housing market, and that the crazy peak of Housing Bubble 1 is now just some sort of normal base. Oh my…

The S&P CoreLogic Case-Shiller National Home Price Index for July was released today. The not-seasonally-adjusted index jumped 6% year-over-year, by far outrunning growth in wages and household incomes, which it has done for years. The index has surpassed by 5% the crazy peak (I mean, the normal base) in July 2006: 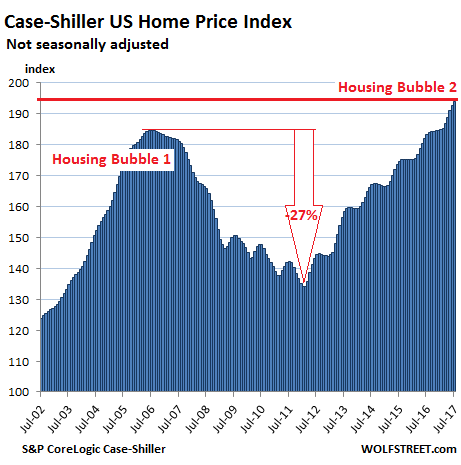 While real estate is subject to local dynamics, monetary policies have a massive impact, particularly in places where the money flows to, which creates local housing bubbles. If enough local bubbles balloon at the same time, it becomes a national housing bubble – as seen in the chart above.

Below are the local housing bubbles of major metro areas in all their magnificent beauty:

In the Boston metro, the index soared 82% from January 2000 to November 2005. That was crazy. Then the index declined 18%, which wasn’t all that much. Since then, it has re-soared and is now 13% above the peak of Housing Bubble 1: 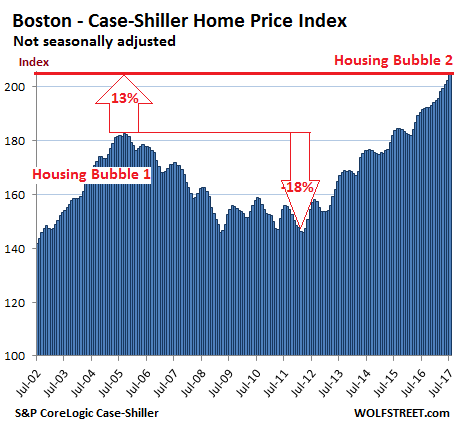 The Case-Shiller Index is based on a rolling-three month average; today’s release was for May, June, and July data. Instead of median prices, the index uses “home price sales pairs,” for instance, a house sold in 2011 and then again in 2017. Algorithms adjust this price movement and add other factors. The index was set at 100 for January 2000. An index value of 200 means prices have jumped 100% in those 17 years.

Home prices in the Seattle metro have spiked since the spring of 2016, pushing the index 20% above the peak of Housing Bubble 1 (July 2007): 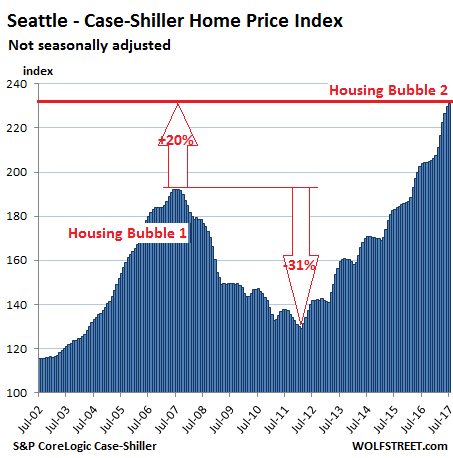 When Housing Bubble 1 was blooming in many big markets, home prices in Denver were just edging up, and people felt left out. But then from the peak in August 2006, the index only fell 14%. The drama didn’t start until 2012, when Housing Bubble 2 lifted off with a vengeance. The index has now soared a stunning 44% above the prior peak: 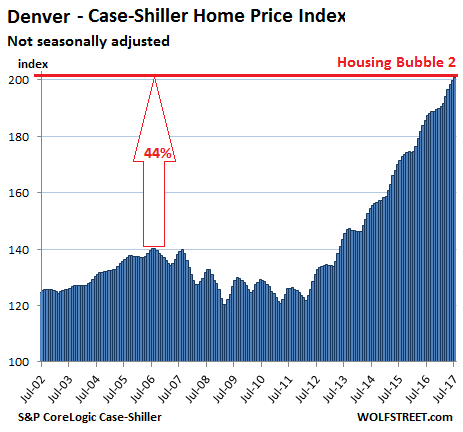 People in the Dallas-Fort Worth metro also felt left out during Housing Bubble 1. Prices rose only 13% in five years. The house price crash mostly bypassed Dallas as well. It was the way a housing market should be, with some ups and downs. But North Texans know how to party when their time comes. The index has now surged by 41% above the peak in June 2007: 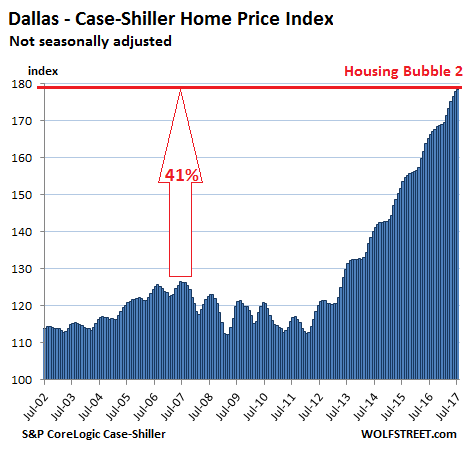 In the Atlanta metro, where home prices had plunged 37% after Housing Bubble 1, prices are now 2.4% above the prior peak: 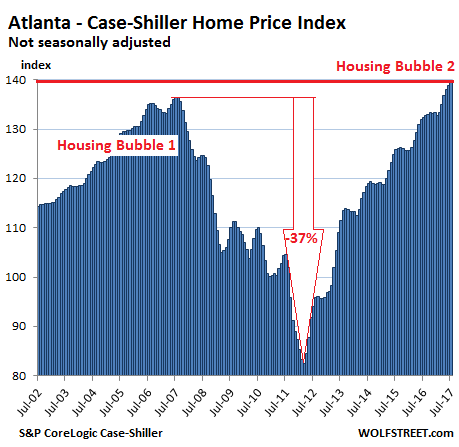 Portland’s home prices have detached from any sense of gravity since 2012, with the index soaring 73% in five years. The index is now 20% above the peak of Housing Bubble 1 and has ballooned by 123% in 17 years: 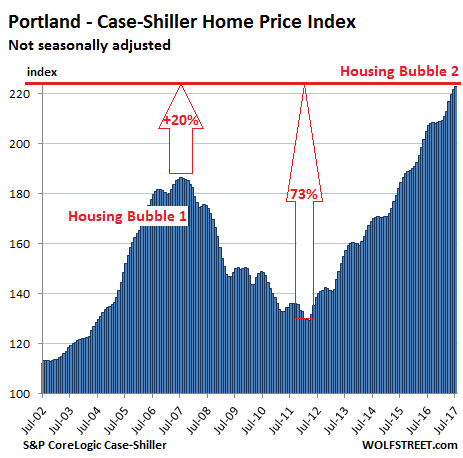 The Case-Shiller Index covers five counties of the Bay Area and not just San Francisco. There are two indices for the area – the “High Tier” index and the overall index. And they behaved differently. The High Tier index (not pictured) tanked 43% during the housing bust, but has now surged past the prior peak by 10%.

The overall index peaked in in August 2007 and then plunged 30% by March 2009. It stayed in that range for three years (however, another measure, the median price, continued to zigzag lower until January 2012). Since then, years of global monetary craziness has sent liquidity from around the world tsunami-like to the Bay Area, and the index has soared 83% from the bottom of the bust and is now 27% above the prior crazy peak. 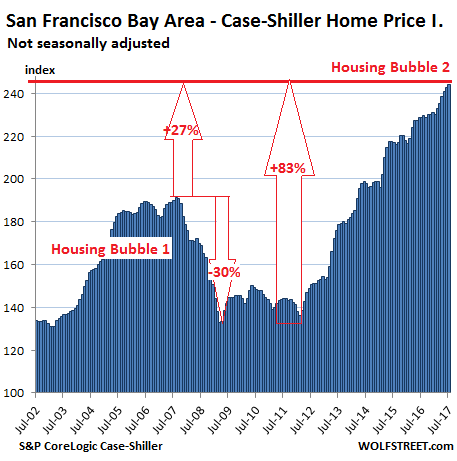 Few housing markets can hold a candle to LA’s beautiful creature. Home prices skyrocketed 174% from January 2000 to July 2006, before plunging at a dizzying rate and giving up much of those gains. Then, fired up by global liquidity, they soared again. The index is still not quite back at the peak level of July 2006, though it’s back where it was in February 2006 (the “High Tier” index for LA, not pictured, is already 4% above the peak of Housing Bubble 1): 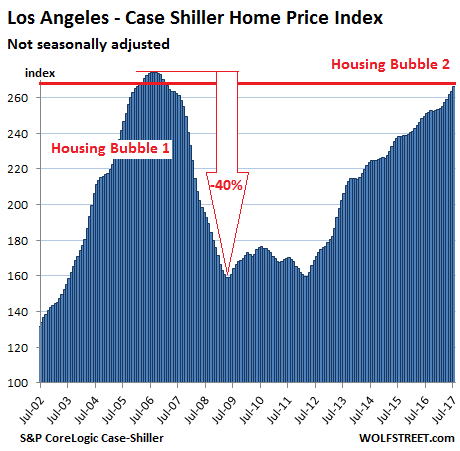 What’s hot in New York City? Condos. The Case-Shiller Index for condos in New York City soared 131% from January 2000 to the peak of Condo Bubble 1 in February 2006. That bubble barely deflated (-17%) before the Fed’s Wall Street manna arrived, flushed through the appropriate bank accounts, and reflated the condo bubble. The index is now 19% above the peak of Condo Bubble 1. Over the past 17 years, the index has soared 175%: 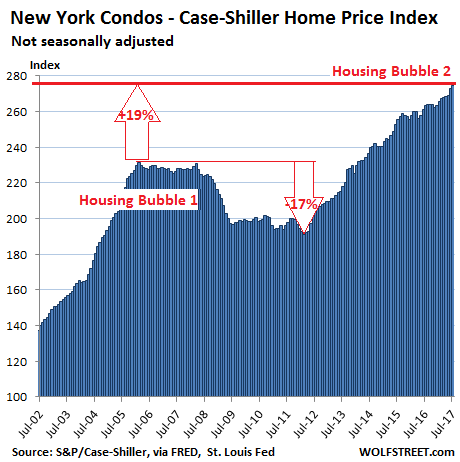 People who make money with assets (capital) came out ahead. People who make money with their labor got whacked. Not only did they not see the income gains that capital enjoyed, but they saw the fruits of their labor shrink when it comes to asset purchases such as a home. Every year, they can buy less and less in assets for the money they earn with their labor. The more politically correct term in the housing market is “affordability crisis,” but it’s a direct result of central bank policies.

The Fed seems to be worrying this scheme might have gone too far and poses risks for banks which use inflated assets as collateral. Since late last year, the Fed has acted like clockwork. The QE unwind starts on October 1. The next rate hike is coming in December. “Low” inflation, no problem. Read… This Fed is on a Mission.

115 comments for “The US Cities with the Biggest Housing Bubbles”