Do the buyers know something that we don’t?

Two major electricity industry takeovers were announced within a few days of each other. Energy Capital Partners, a private equity firm, announced its planned acquisition of Calpine, the nation’s largest generator of electricity using natural gas as a fuel. The acquisition valued Calpine at $17.3 billion ($5.6 billion for the common stock plus assumption of $11.7 billion of debt).

In the case of Oncor, both final bidders had clear motives. Berkshire Hathaway has cash to invest and Mr. Buffett and Co. have targeted U.S. electric utilities for investment As a relatively large financial player, his investments have to be of a size to make a positive impact. In this case that means making relatively large acquisitions. Small ones barely register at Berkshire Hathaway.

Sempra may lack Berkshire’s investable cash, but is nevertheless a solidly credit worthy utility. Its stock sells at an impressive price. If it wants to go shopping for say an electric utility in Texas, it can raise the money.

But let’s take a step back. Why all this seemingly frenetic M&A activity recently? If the U.S. electric utility industry was a river we’d say it sits at the confluence of three troublesome tributaries; the No Growth, the Looming Competitive Threat, and the High ROE (great name for a ranch). And so the utility industry consolidates.

The power generators, especially the non-regulated ones, haven’t so much consolidated as engaged in a business form of serial reorganization and bankruptcies starting about 15 years ago. Low natural gas prices and competition from wind power have recently combined to deny profitability to this industry. As a result, like the old boll weevil in the song, these financially precarious power generating assets are as a result “just a lookin’ for a home.”

Like other utilities, Sempra requires new asset acquisitions to maintain its earnings growth. And as noted not many “Buffett-class” opportunities arise. Oncor comes to market in a way that’s unusual for an electric utility. A supposedly extremely savvy leveraged buyout firm saddled the entity with so much debt it collapsed. And here we are. But it’s all good. A lot of former management and private investors made a lot of money.

If Oncor is about greed and a rather loose attitude towards regulatory supervision, Calpine is a story of continually unmet aspirations. Formed in 1984 by California engineers and a Swiss holding company (hence the name Calpine), assets grew to $21 billion by 1992. The company went public in 1996 and bankrupt in 2005, one more victim of too much borrowing and not enough revenue.

In 2008, Calpine emerged from bankruptcy, still with a heavy burden of debt (83% of capitalization vs the 50% typical of regulated utilities.) In the ensuing decade, Calpine’s earnings gyrated wildly. Return on equity averaged a paltry 8% — barely higher than the interest and other financial charges paid on debt.

The company did run power plants efficiently. But given its bloated balance sheet and reliance on natural gas as a fuel, it has become remarkably and to a degree inversely affected by the vicissitudes of wind power. Average capacity factor was around 49% , meaning that the facilities produced less than half of the theoretical output — not out of line with other gas-fired generators. The news stories said that Energy Capital Partners valued Calpine’s ”stable cash flow”. Stability appears to be in the eye of the beholder.

Table 1. Calpine Return on Equity and Return on Assets 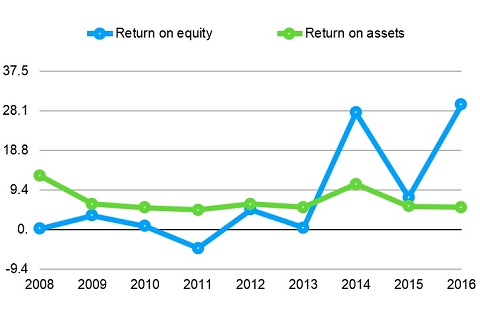 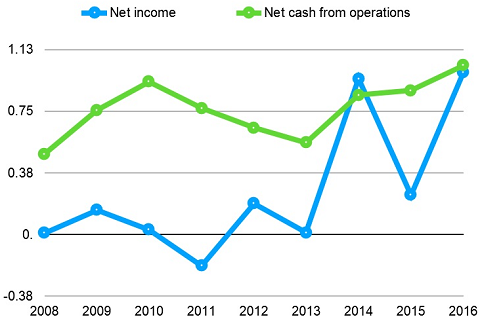 We are still left with the question: Why would supposedly clever, ex-Goldman guys like Energy Capital Partners pay $5.6 billion for Calpine’s assets, a 51% premium over the previous day’s closing price? And an 82% premium over book value of the stock?

Buying electric base load capacity in bulk like this is a bet on commodify prices. If long term electricity prices rise, Calpine’s new owners win.

Do the buyers know something that we don’t? Perhaps they have a bullish economic outlook which strengthens their case for surging electricity demand. Or that the trend for renewable generators to take business from fossil-fueled facilities will reverse course now that the Trump administration has taken a stand against renewable resources. Also, the rise of renewables does create a market for certain gas-fired power plants that come on line quickly when renewable output lags.

But electric vehicles are the game changer. We’re talking about the migration of personal transportation vehicles, currently powered by gasoline and internal combustion, to vehicles powered by electricity and batteries. This represents an enormous additional increment of demand for electricity. But how long till it becomes a real economic factor?

Calpine, as a result of its frequent dalliance with financial disaster, has accumulated net operating losses of about $6.7 billion. This translates into about $2.3 billion of tax savings — if the company ever began to earn enough to pay taxes.

We estimate a firm that earns 8% on average, in this market, might sell somewhat above book value. About where Calpine’s stock sold before the recent offer. Add the value of the tax loss carry forward and, voila! A stock valuation of around $5.9 billion.

Oncor, to us has come to resemble a wealthy young heir from a broken home. Sempra is merely the latest in a stream of “relatives” offering to adopt.

Calpine, on the other hand looks like a straight up option. If there’s big uptick in U.S. electricity demand, or even the prospect of same, it pays off handsomely. If not, they can join the old boll weevil. By Leonard S. Hyman (author of the book, “Electricity Acts”) and William I. Tilles for Oilprice.com.