The last big enthusiastic buyer, China, is leaving the party.

Commercial real estate, such as office and apartment towers, in trophy cities in the US and Europe has been among the favorite items on the long and eclectic shopping lists of Chinese companies. At the forefront are the vast, immensely indebted, opaquely structured conglomerates HNA, Dalian Wanda, Anbang Insurance, and Fosun International. In terms of commercial real estate, the party kicked off seriously in 2013. Over the two years in the US alone, according to Morgan Stanley, cited by Bloomberg, Chinese firms have acquired $17 billion worth of commercial properties.

In the second quarter in Manhattan, Chinese entities accounted for half of the commercial real estate purchases. This includes the $2.2 billion purchase in May of the 45-story office tower at 245 Park Avenue, the sixth largest transaction ever in Manhattan. At $1,282 per square foot, the price was also among the highest ever paid for this type of property.

Most of HNA’s funding for this deal — one of its 30 major acquisitions since the beginning of 2016 — was borrowed from China’s state-owned banks. But HNA also borrowed $508 million from JPMorgan Chase, Natixis, Deutsche Bank, Barclays, and Societe Generale. This has been the hallmark for all Chinese acquirers: a lot of borrowing from China and some funding from offshore sources.

Similarly, Chinese acquirers accounted for about one-quarter of commercial property transactions in central London in 2016, according to the Morgan Stanley report. In Australia, over the past few years, Chinese firms accounted for 12% to 25% of all office transactions by value.

But now these conglomerates and other Chinese firms engaging in outbound acquisitions have run into a veritable buzz saw of regulatory efforts by Chinese authorities designed to accomplish two things: slow down these capital outflows; and keep the Chinese banks from getting perforated by their exposure to the overleveraged conglomerates.

US and European banks too are getting second thoughts about funding these deals. Bank of America, for example, has already pulled back from doing business with HNA — “We simply don’t know what we don’t know, and are not prepared to take the risk,” BofA president for Asia Pacific, Matthew Koder, had said in an internal email.

Morgan Stanley estimates that China overseas direct property investment could plunge by 84% in 2017 and another 15% in 2018 — to just $1.4 billion. In other words, just a tiny trickle.

So what would happen to the US commercial property sector when the last big enthusiastic buyer, China, is leaving the party? Will the sellers get to dance with each other?

The party isn’t entirely over just yet: For example, Sunac China Holdings, now one of China’s most debt-burdened property investors after buying assets from Dalian Wanda, was able to sell $1 billion of dollar bonds last week, according to Bloomberg. So foreign-currency funding is still available to Chinese property buyers, but getting harder and more expensive to come by.

Commercial real estate prices in the US, after a seven-year boom, peaked last year. Green Street’s Commercial Property Price Index in July 2017 was below where it had been in June 2016. This marks the first year-over-year decline – albeit a small one – since the Financial Crisis. December had been the peak: 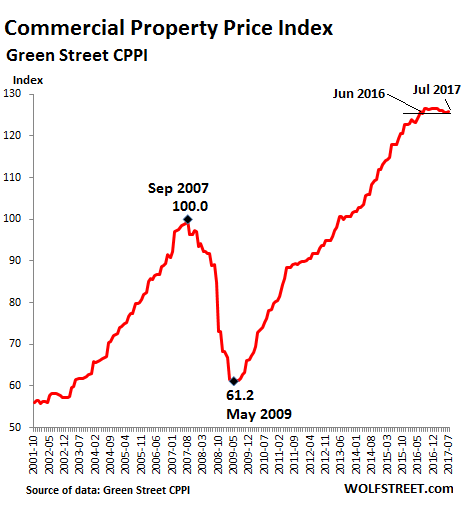 In many markets, transaction volume has dropped, as domestic buyers have become leery. Across the US, deal volume fell 8% in the first half of 2017. And Q2 (down 5%) was the third quarter in a row of year-over-year declines. “Investor caution” hurt higher-priced markets such as Manhattan in particular, according to Real Capital Analytics.

Everyone had been hoping that China’s formerly insatiable appetite for US properties would keep the market afloat and would let domestic sellers, after running up the seven-year boom, get their money out at peak prices.

But China’s big property acquisitions are likely to get much scarcer, with US and European banks less eager to lend to Chinese conglomerates; with Chinese banks under pressure to reduce their vast exposure to the conglomerates and their precarious deals at peak prices; and with Chinese authorities determined to stem the capital outflows. And this could hit the already wheezing commercial real estate bubble in the US at the worst possible moment.

Landlords are reading the memo, but it may be too late. Read…  Will Plunging Store Rents Slow the Retail Doom-and-Gloom?