Nearly every retail chain caught up in the brick & mortar meltdown is an LBO queen – acquired in a leveraged buyout by a private equity firm either during the LBO boom before the Financial Crisis or in the years of ultra-cheap money following it. During a leveraged buyout, the PE firm uses little of its own capital. Much of the money needed to buy the retailer comes from debt the retailer itself has to issue to fund the buyout, which leaves the retailer highly leveraged.

The PE firm then makes the retailer issue even more junk bonds or leveraged loans to fund a special dividend back to the PE firm. Come hell or high water, the PE firm has extracted its money.

Then the PE firm charges the retailer hefty management fees on an ongoing basis.

This form of asset stripping removes cash from the retailer and leaves it struggling under a load of debt. It works wonderfully until it doesn’t – until booming online sales started eating their lunch, sending these overleveraged retailers, one after the other, into bankruptcy court, where creditors learn what it means to end up holding the bag. But they’re not amused, as we now see. But first the numbers…

Since 2010, retail chains owned by PE firms have issued $91 billion in junk bonds and leveraged loans just to raise the money for the special dividends paid to their PE owners, according to data by LCD of S&P Global Market Intelligence, cited by the Wall Street Journal. This does not include debt piled on retailers during the LBO itself. And it does not include drug stores and food retailers – such as PE-firm-owned Safeway-Albertsons, caught up in the middle of the meltdown.

The chart shows how the asset stripping business boomed until 2015, when the brick-and-mortar meltdown set in (2017 issuance through June): 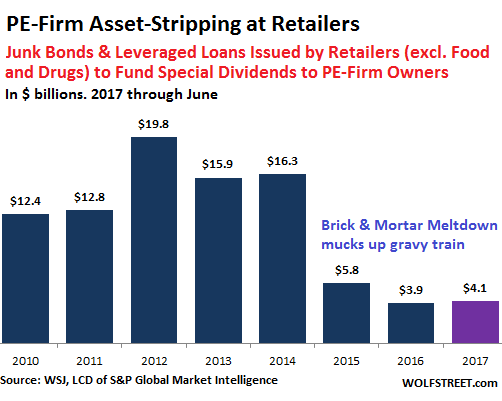 The PE firms get the cash. The retailer gets the debt. By the time the retailer goes bankrupt, the PE firms already got their money out. Creditors – usually institutional investors plowing in other people’s money – are left fighting over scraps…

Payless Inc., the shoe retailer with 22,000 employees and 4,000 stores in 30 countries, filed for Chapter 11 bankruptcy on April 4. In the filing, it said it plans to cut its debt in half, stiffing creditors for the rest. In 2012, Payless was acquired in a leveraged buyout by PE firms Golden Gate Capital and Blum Capital Partners. Less than five years from LBO to bankruptcy.

Over those five years, Payless piled on more than $700 million in new debt: This includes the debt resulting from the LBO, plus the debt to fund $350 million in special dividends to the PE firms. They also extracted management fees. In bankruptcy court, Payless revealed that in 2016, it had about $2.3 billion in revenues and $840 million in debt.

In addition, as it is shuttering hundreds of stores, its off-balance-sheet obligations – store leases – have come to the surface, and landlords are clamoring for their money. Vendors fear they’re getting shafted. And they all blame the special dividends and management fees extracted by the PE firms. The Journal:

Vendors and landlords alleged in court papers that the dividend payouts, along with other payments to the investors, left the retailer particularly vulnerable to collapse just as technology and shifting consumer behavior upended the retail industry.

“The depletion of their coffers put the company on a dangerous path that ultimately led to this instant bankruptcy filing,” a group of Payless’s unsecured creditors said in June court papers.

Lenders that are owed the majority of the debt will end up controlling the melted-down retailer. And they got a tiny consolation price for their screaming in bankruptcy court, according to The Journal:

Following heated exchanges in filings and in the courtroom, as well as private negotiations, the private-equity backers and lenders have agreed to give more than $20 million to the company, which will be used toward beefing up the creditors’ recoveries. Meanwhile, the creditors have agreed not to bring any legal claims against the backers following the bankruptcy filing.

Then there’s Gymboree Corp. The operator of 1,281 children’s clothing stores and 11,000 employs filed for Chapter 11 bankruptcy on June 11, after defaulting on an interest payment. The leveraged buyout by Bain Capital in 2010 piled $1.8 billion in debt on the company. Bain also extracted management fees over the years.

The restructuring plan calls for stiffing creditors out of about $1 billion. And some of the creditors were having a cow. The Journal (emphasis added):

Earlier this month, Gymboree’s unsecured creditors, including vendors and landlords owed an estimated $220 million, said in court papers they have been investigating potential claims against Bain and other insiders. The creditors, which are slated to receive nothing, point to dividends and fees received by Bain and its affiliates.

And denim designer and retailer True Religion with 1,900 employees filed for Chapter 11 bankruptcy on July 5. PE firm TowerBrook Capital Partners had acquired the company for $835 million in 2013. The company is now saddled with $535 million in debt (it only had $370 million in revenue in 2016). Four years from LBO to bankruptcy.

In the “prepackaged” bankruptcy, TowerBrooks worked out a deal with senior lenders, including a debt-for-equity swap that will wipe out $350 million of its debt. These lenders will get 90% of the equity in the restructured company. But junior creditors are not amused. The Journal:

[A] junior debt lender, Ares Management LP, raised concerns about the proposed restructuring plan, which will leave the creditor with a slim recovery while private-equity backer TowerBrook Capital Partners LP is slated to receive the same or higher return as Ares. Typically in bankruptcy, lenders expect to be paid before equity owners.

During the first-day hearing, an attorney for Ares said the firm didn’t support the plan and an investigation may be needed to better understand TowerBrook’s role.

A lot of times, these PE firms acquire part of the bonds before bankruptcy of their portfolio company for cents on the dollar. For example, Bain Capital bought significant amounts of Gymboree bonds. This gives PE firms more control during the bankruptcy proceedings, and they win again.

Why do institutional investors fund asset-stripping associated with LBOs and special dividends? Some of the answers are in Wall Street’s culture where fee extraction is everything, and one firm helps another. And too, they’re chasing yield in a world where central banks have repressed yield. Which turns out to be a costly chase.

Retail landlords are reading the memo, but it may be too late. Read…  Will Plunging Store Rents Slow the Retail Doom-and-Gloom?