But Uber’s growth among business travelers got lumpy.

Rideshare companies – mostly Uber, but now also Lyft elbowing into the scene – are changing the way business travelers look at ground transportation. In the process, these worker bees, who’re spending their company’s money, are not only crushing the taxi business but also that end of the rental car business. The collapse of business travel spending on taxis and rental cars is just stunning. And there is no turning back.

Uber’s and Lyft’s combined share of the ground transportation market in terms of expense account spending in the second quarter has soared to 63%, with Uber hogging 55% and Lyft getting 8%.

The share of taxis has plunged to 8%, now equal with Lyft for the first time, according to Certify, which provides cloud-based expense management software. Uber hit that point in Q1 2015, when expense account spending on Uber matched spending on taxis for the first time, each with 25% of the market; rental cars still dominated with a 50% share. But that was an eternity ago.

This is what the revolution in business ground transportation spending looks like: 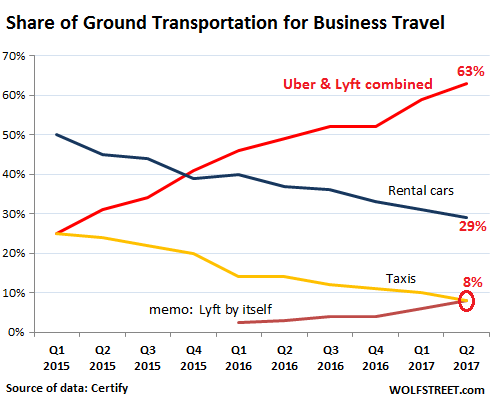 Note that the share of rental cars and taxis has declined at roughly the same rate.

Uber’s growth in the business travel ground transportation market has continued despite its constant drumbeat of intricate debacles in the news, but the rate of growth has slowed. And Lyft’s rate of growth has surged. The chart above shows this surge in the growth rate of Lyft, which caused its share to jump from 3% a year ago to 8% now.

In analysis of major U.S. metros, taxi also lost ground in all but Miami and Atlanta, while Lyft picked up share everywhere but Miami where receipts and transactions were flat on the quarter. Conversely, Uber lost between 1-6% in every city but Chicago where the ride-hailing leader gained 1%.

But it hasn’t stunted Uber too much. In Q1 2017, Uber became for the first time “the most expensed brand” in overall business expense reimbursements, in this sequence, according to Certify’s White Paper at the time:

And in Q2 2017, despite all the problems Uber is having, its share of overall expense reimbursements jumped to 9% and was once again “the number-one most expensed brand processed by the Certify system.”

As Uber has crushed taxis and rental cars in this segment, it is also swerving in other directions to take business away from other sectors in “unique ways,” according to Certify’s mid-year update. It shows up in the number of Uber business-expense transactions of $100 or more:

With 3.6%, Uber had the greatest number of transactions over $100 compared to Lyft at 0.4%. Further analysis of these transactions revealed a possible explanation for why business travelers might turn to ride hailing in situations where car rental or other services might have been used in the past:

“Train from Sheffield to London was struck by lightning, had to take Uber back to London” ($211.28 expense)

“Bad situation with a flight canceled, best thing was to take a one-way Uber from Wilmington to Charlotte Douglass airport” ($210.07 expense).

And that would be a new trend, with consequences for the hotel sector, airlines on short hops, and other travel services.

Taxi companies and rental car companies have to at least break even in the long run, or else they’re toast. Uber and Lyft don’t have to worry about the long run yet and have no such constraints. They’re burning investor capital as fast as they can and as they see fit to become heroes.

During the last round of funding, Uber was valued at $68 billion and Lyft at $7.5 billion. Neither might ever be able to make any money, given their pricing structure with which they undercut taxis and rental cars, and their high expense structure. But if they could shed their human drivers? That’s why rideshare companies spend a ton of money on the shift to autonomous cars. Mass-production is years away, and lots of hurdles remain. So this spending will have to continue for years.

But with the large amounts of money rideshare companies – and not just those in the US – have raised, they’ll be able to trip up related and unrelated sectors — long before autonomous cars become a mass-produced piece of equipment.

Overall car ownership might experience “negative growth,” as more people in densely populated urban areas might decide that it’s easier and cheaper to pay per ride when needed, and use mass transit at other times, or use a combination of both, rather than paying 24/7 for the overall expense and hassles or owning, driving, parking, and maintaining a car, including paying for tickets and taxes. And they can text legally while being driven.

Some of this is already happening. it would push rideshare companies’ impact on the economy far beyond taxis and rental cars. The entire auto industry is already looking over its shoulder and rethinking its business model.

It’s already not easy in the land of Carmageddon: GM, faced with plunging car sales and soaring car inventories, has started discussions with the UAW to eliminate six car models. Entire plants are at risk. Read…  As Sales Plunge, GM Might Cancel Six Car Models