Investors are conditioned to believe the Fed has got their back. But they might be wrong.

By Benjamin A. Smith, Lombardi Letter:

To say the stock market is on a roll is an understatement. The Big Three indexes (S&P 500, Dow Jones Industrial Average, NASDAQ) are making fresh highs, mostly because of valuation expansion. That is what investors are focused on. But what about the lack of market decline? The dynamics behind this fact could speak louder than any stock rally could.

The Wall Street Journal is reporting that major indexes haven’t gone a calendar year without a five-percent-or-more pullback in 20 years. The last time this happened was following the “Brexit” referendum, which eked out a 5.2% peak-to-trough loss. While not quite a “calendar” year, it was over a year ago that this happened. In fact, the 267-day streak with a five-percent decline is the longest going back to 1996.

Additionally, the S&P 500 has only experienced a 2.8% drawdown year-to-date. This, in contrast to a historical average of 14.4%. If it holds, it would be the second smallest drawdown in 60 years.

So what are investors to make of a market that won’t drop? From a surface perspective, the market appears incredibly strong and resilient. Although it’s tough to argue that fact, if we dig a little bit deeper, a different perspective emerges. It’s where excessive central bank liquidity (via asset purchases, swaps, interest rate policy etc.) exerts too much influence on the market. There’s a certain instability you can almost feel. 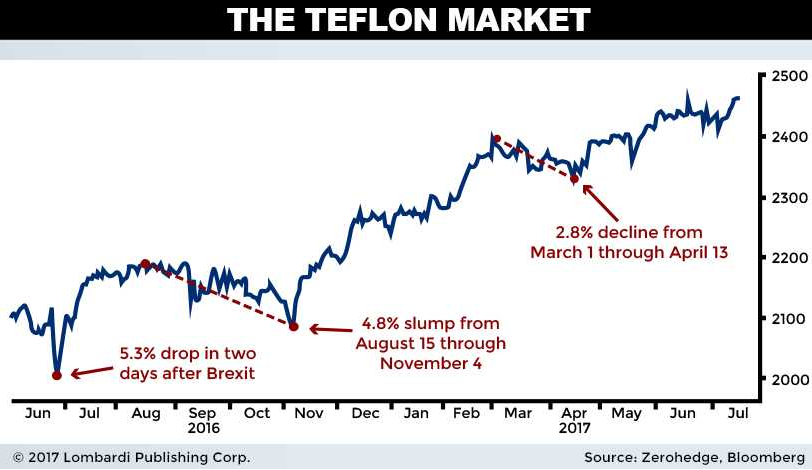 In essence, the market has become less about earnings growth and more about Central Bank liquidity. This is dangerous for two distinct reasons.

First, unless the Fed remains fiscally accommodative and active with asset purchases, the bubble will burst. In the meantime, the stock bubble keeps getting much larger and more expensive. The higher it goes, the more violent the unwind when the Fed removes the training wheels. Yes, eight-plus years into recovery, it still cannot let the economy fend for itself.

Second, there’s an assumption that the Fed actually knows what it’s doing. It’s assumed the Fed’s economic models are correct and that it’s in control. Both of these assumptions are dubious. The fact is, we’re in the midst of the greatest economic experiment ever devised. The Fed’s balance sheet has gone parabolic since the U.S. Housing crisis, which it’s attempting to unwind with unpredictable results. Interest rates were never this low for this long. The list goes on, but it’s important to understand that we’re actually living in extraordinary economic times. Things may seem “normal,” but if the Fed loses control or if a deep recession strikes, all heck can break loose.

What Does This Mean for the Stock Market?

The market melt-up on low volume should be a warning sign for investors. The lack of selling means that everyone is herded on the same side of the market, riding the tidal wave of Central Bank liquidity until it stops working. It’s reminiscent of the Tech Bubble, when everyone knew most internet stocks were bogus. But investors didn’t care, because they thought they could sell their positions before the market crashed.

The problem with that mentality is that after nine years of dip buying, the next dip could be the one that doesn’t come back. Investors are conditioned to believe the Fed has got their back. The belief is that if the market strays too far, the Fed will step in and stem the tide. But will it? That’s a very dangerous assumption being that it didn’t stop the 2001 and 2008 crashes from happening. The Fed is a critical player, but it’s not omnipotent.

Ultimately, the market sell-side is like a coiled spring. And the Fed is pulling the marionette strings in the background. People are allowing themselves to be puppeteered because it’s profitable to do so. But what the Fed giveth, the Fed can taketh away. Relying on a backstop to prevent a market crash is not an investment strategy.

This assumes it can even control the massive amounts of latent sell demand if the market really goes into reverse. Just think of all the record ETF inflows, investment fund money, and margin debt looking for a reason to sell after several years of riding the wave. When it happens, the bid could go dark. Prolonged high volatility and high volume days will tell us this is underway. By Benjamin A. Smith, Lombardi Letter

Investors who bought the hype are left holding the bag. Read…  Another Former $2-Billion Startup Gets Rolled Up