The HK financial system is “very strong” and “can withstand an adjustment in the property market.”

The Hong Kong dollar is pegged to the US dollar. Hong Kong’s monetary policy is follows the Fed’s monetary policy. The Fed has embarked on a tightening cycle, raising rates four times so far. The Hong Kong Monetary Authority has followed each time. Last week, it raised its policy rate by 25 basis points to 1.5%. This will have consequences for the most expensive and ludicrously inflated housing bubble in the world.

“We have to warn our people about the dangerous situation of the property market at the moment,” Hong Kong Financial Secretary Paul Chan told Bloomberg TV.

“No one can tell how deep the adjustment will be or what is the appropriate level of adjustment because it is market force,” he said. “It is not up to the government to dictate, but I think it is important for people to recognize it is risky.”

But he doesn’t expect a repeat of what happened when Hong Kong’s prior housing bubble imploded during the Asian Financial Crisis.

In the two years prior to the Asian Financial Crisis, property values had surged about 80%, with the Housing Index rocketing from 55 to 100. But in 1997, it imploded. Over the next 15 years, the index plunged 70% and bottomed out in 2003 at a record low of 31. Housing market “corrections” from bubble highs can take a very long time and can be very deep.

Now, Hong Kong has a housing bubble to beat all housing bubbles. The Housing Index has soared to 147.2 in March, up 1.8% from February, and up 17% year-over-year, having doubled over the past seven years (via Trading Economics, red marks added): 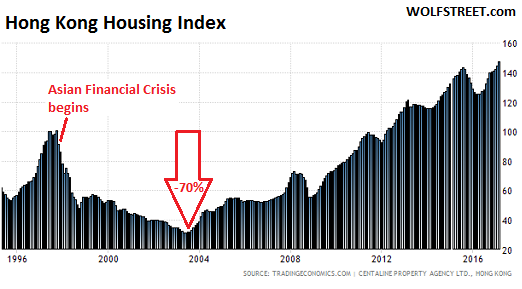 But current situation “is very different from 1997 when the last property bubble burst,” Chan said. This time, the “financial system of Hong Kong” is “very strong” and “can withstand an adjustment in the property market.”

Last time, it couldn’t. During the Asian Financial Crisis, the Hong Kong stock market crashed. The currency peg came under speculative attack. The government defended the peg by, among other things, raising interest rates to 23% (and briefly much higher), which caused stocks to crash further, which caused the government to buy stocks to prop them up….

But the property market was let go.

This time, Hong Kong’s financial system could withstand a crash better. That’s the theory. But the government didn’t prop up the property market last time, and now it is warning homeowners, potential home buyers, and speculators that the market has become a “dangerous situation” for them.

Hong Kong has been trying to tamp down on property speculation with various measures, such as tighter rules for mortgages, raising stamp duty rates on the sale of property, and other measures. But to no avail so far. Why?

“Fundamentally over the past five years, the exceptionally low interest rate, the ample liquidity in the market, the supply-demand imbalance situation, all add up,” Chan said. “By demand measures alone we cannot suppress the price. But I think it is fair to say by applying those measures, we do suppress external speculative investment demand.”

By “external,” he meant speculative demand from China, including Chinese developers that are outbidding Hong Kong developers for plots of land at record prices.

Though policy rates have come up, borrowing rates are still very low, and borrowing knows no limits, with more parallels to the Asian Financial Crisis. Bloomberg:

The value of outstanding mortgages jumped by more than a third in the five years through December and now amounts to 47% of gross domestic product, more than 10 percentage points higher than in early 1997 before a housing bubble burst.

Oh my, how things have changed since late last year. Read…  The Fed is on a Mission, Doesn’t Worry about Markets: New York Fed’s Dudley

42 comments for “Hong Kong Warns: Its Housing Bubble is a “Dangerous Situation””