Commercial and residential real estate bubbles choke the economy. The upper bounds of hype and craziness have been reached.

The San Francisco Bay Area has seen an astounding jobs boom since the Great Recession. The tsunami of global liquidity that washed over it after the Great Recession, central-bank QE and zero-interest-rate policies that sent investors chasing blindly after risk, a blistering no-holds-barred startup bubble with the craziest valuations, one of the greatest stock market bubbles ever – whatever caused the boom, it created one of the craziest housing bubbles ever, a restaurant scene to dream of, traffic jams to have nightmares over, and hundreds of thousands of jobs. But it’s over.

In May, employment in San Francisco dropped to 542,600 jobs, the lowest since June 2016, according to the data released on Friday by the California Employment Development Department. The employment peak was in December 2016 at 547,200.

The labor force in the City fell to 557,600. That’s below March 2016! This confirms a slew of other data and anecdotal evidence: People and businesses are leaving. It’s too expensive. They’re voting with their feet. 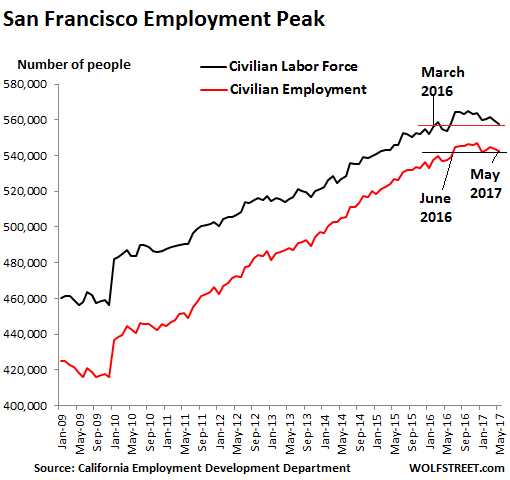 Between December 2009 (the low point during the Great Recession) and December 2016 (the high point since then), the City created 131,400 jobs. An increase of 31.6% in seven years! The city created on average 18,800 jobs per year over the period, a breath-taking employment boom for a city of 850,000 people. And San Francisco accounts for only 11% of the Bay Area population of 7.68 million.

This chart shows the year-over-year employment gains (blue) and losses (red) since January 2009. Note the trend from the job creation peak in the fall of 2014: 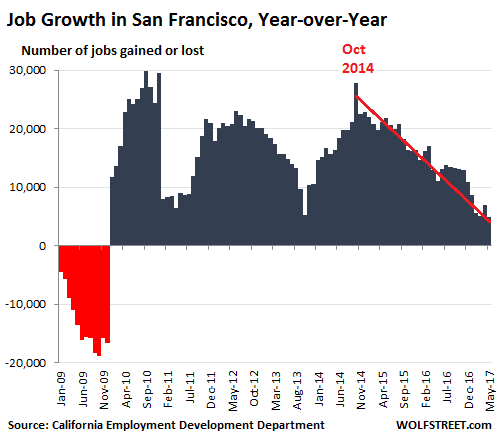 Across the Bay, in Alameda County, whose population is about twice the size of San Francisco’s, and which includes Oakland, Berkeley, and other cities, a similar scenario is playing out. 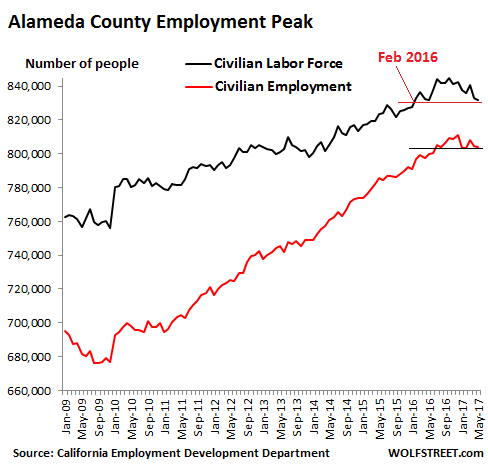 This charts shows the year-over-year changes in employment, the boom and how the trend over the past year has been deteriorating and is now heading into the lean times: 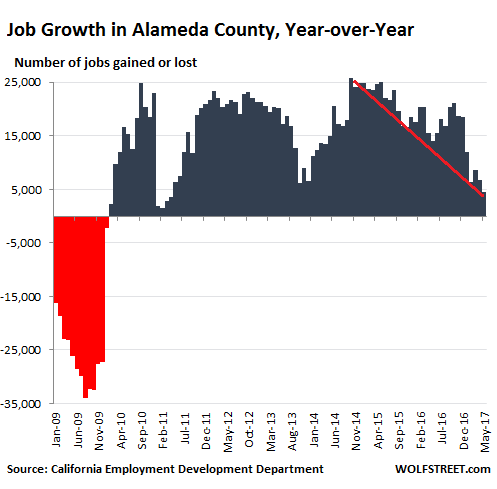 Don’t get me wrong. The Bay Area isn’t “collapsing” at this point. When you walk around in certain parts of San Francisco, you see tourists in astounding numbers. It’s still tough to get into popular restaurants though the other Saturday we were able to get a reservation for 8:30 PM, peak dinner time, by calling two hours ahead. Before then, we couldn’t duplicate that by calling two days ahead. But it might have been a fluke. By 9 PM, the place was full. Traffic is still a nightmare seven days a week. Home prices in San Francisco, after flat-lining for two years, suddenly spiked in May to another crazy record. Commercial real estate is hanging on by its teeth to sky-high prices, though apartment rents have dropped from their peak.

But there are a surprising number of shuttered retail shops and restaurants, including some favorites. Landlords have become too greedy, and when they jack up rents at lease renewal time, the equation no longer works for the business. This doesn’t mean business is bad. It means commercial rents are too high. This has been duplicated in the office sector. There is still demand, but a number of companies, including Charles Schwab, are sending jobs to cheaper states.

And when the work force is hightailing it though there are still plenty of jobs, it means that housing costs are too high. This is a universal complaint in the Bay Area. Nearly half the millennials said they’re “likely” to leave.

This is how commercial and residential real estate bubbles with their uneconomical prices choke the economy.

On top of the cost factors, there is the startup boom that is now grappling with a new sense of reality. A number of startups, such as NerdWallet, and more mature companies, such as Twitter, have laid off people. Others have stopped hiring. A slew of them shut down. Some companies are still getting funded, but the frenzy has been dialed down. And Uber, a San Francisco darling that is moving its headquarters to Oakland, is in a world of hurt.

But this time, there is no financial crisis, which set off the last bust. And this time, the Nasdaq isn’t collapsing, which triggered the bust starting in 2000. The Nasdaq is hovering near all-time highs. Excess liquidity is still sloshing through the system. Financial stress is at historic lows. And the Fed’s policies, despite the upticks in its target rate, are still highly accommodative. The whole system is set on “go,” but in the Bay Area, it has reached the upper bounds of bubble hype and craziness and can’t go anymore.

And so the big employment boom of San Francisco and surrounding Bay Area counties is over and tech skills are suddenly “abundant.” Read…  It Starts: Hiring Falls in San Francisco Bay Area, Says LinkedIn