Inflation pressures further up the pipeline rise the most in 5 years.

The Producer Price Index, which measures inflation at the wholesale level for goods and services, and thus up the pipeline from the Consumer Price Index, jumped 2.5% in April from a year ago, the steepest increase since February 2012, blowing past consensus expectations of  2.2% (chart by Trading Economics):

On a monthly basis, seasonally adjusted, wholesale prices rose 0.5% from March. Nearly two-thirds of that increase was due to services, the biggest part of the US economy, where prices increased 0.4% from March. Among the standouts, services less trade, transportation, and warehousing, jumped 0.8% from March.

The Producer Price Index reached a new all-time high in April of 112.7 points. In the chart below by Trading Economics, note the big dip in late 2014 and through 2015, caused by the collapse in energy prices. While energy prices have increased since then, they remain much lower than they’d been through mid-2014, with crude oil still down 55%. But the rest of the wholesale price universe, particularly in services, has more than made up for it: 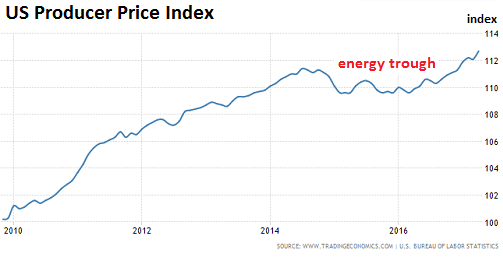 Wholesale price increases are price pressures that are building up in the pipeline and are filtering down into consumer prices with some delay. The Consumer Price Index is already up 2.4% from a year ago.

Today’s data adds to the basket of data points the Fed can use to justify its policies. It already brushed off the economic slowdown in the first quarter as “temporary.” Given how bad that slowdown was, it makes sense to expect the second quarter to look better in comparison – hence the sort of a rebound that would validate the “temporary” nature of Q1’s slowdown.

So more and more of the pieces are falling into place, outside of some “temporary” setbacks, for the Fed to pursue its path, not only to further raising its target rates but also to begin unraveling QE. And they’re stepping up to their pulpits and preaching it. We can ignore the few hawks on the FOMC. It’s the doves that matter when it comes to tightening. When the doves are squealing for tightening, it’s happening.

Just yesterday, Boston Fed Eric Rosengren exhorted his FOMC members to raise the federal funds target rate three more times this year, so to a range of 1.5% to 1.75%, and start unraveling QE by shedding some mortgage-backed securities and Treasuries. He wants to see “a gradual reduction in the balance sheet,” he said, to avoid an “over-hot economy.” All of this, “assuming the economy evolves like my forecast envisions.” Since last year, he has been worried about asset prices, and has specifically named the commercial real estate bubble and what it could do to “financial stability” with increasing intensity (here in March).

And today, it was New York Fed president William Dudley who observed that, based on the economy being “pretty close to full employment,” and inflation being “just a little bit below our target of 2% if you look at the underlying trend,” based on the Fed’s favorite core PCE inflation measure, “we are going to want to gradually remove monetary policy accommodation.” That includes not only raising rates, but also beginning to unravel QE “sometime later this year or next year.”

The Fed keeps its eyes riveted on the markets. It doesn’t want another “Taper Tantrum.” What it sees is that the stock market is ignoring it. Bonds with longer maturities are ignoring it. Junk bonds are ignoring it. Risks still don’t matter. The reach for yield continues. Asset prices are sky-high. In short, investors are ignoring the Fed – that’s what it sees, which is one more reason for the Fed to continue marching to its tune, though if markets get crashy, it could change its mind in a New-York-Fed minute.