Something embarrassing is happening to the wallet.

Consumer spending – not just retail but also healthcare, housing, tuition, and so on – accounts for 69% of the US economy. Decent economic growth without growth in consumer spending is practically impossible. That’s why everyone is watching consumers. And everyone is praying that they’ll spend.

They’ll have to spend above the rate of inflation for “real” growth (adjusted for inflation) to happen. But that might not be happening over the next 12 months, according to the selfsame consumers.

This isn’t from a wayward blogger spreading some kind of homemade doom-and-gloom gospel, but the New York Fed. It just released its monthly Survey of Consumer Expectations – which covers inflation, the labor market, and household finances, including income and spending expectations. And concerning spending expectations over the next 12 months, it found this embarrassing data point:

Median household spending growth expectations dropped sharply from 3.3% in March to 2.6%, the lowest level observed since the start of our survey in June 2013.

The decline was fairly widespread, but largest among lower education (high school or less) and lower income (below $50,000 household income) respondents.

Income expectations rose, but only by 2.8%, same as the expected rate of inflation, in the fervent hope that any income increases might keep up with inflation. This fervent hope has been frustrated too often.

Median household spending growth expectation for the coming 12 months looks like this: 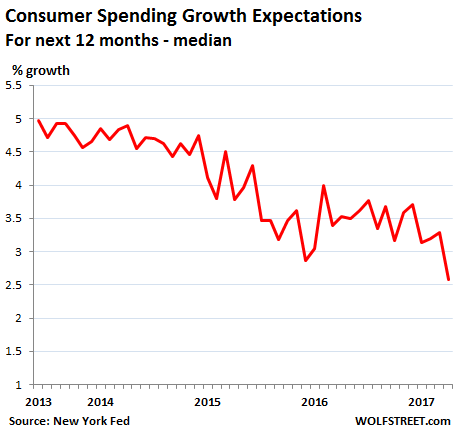 The spending growth expectations by income level are even more interesting, though the data is volatile and noisy. In the chart below, the red line denotes growth of spending expectations by households making under $50,000. Median household income in the US – half earn more, half earn less – is currently $58,600. So these folks aren’t that far below the median and make up a big part of the population. And note what happened to their spending growth expectation. It plunged from 4.5% to 2.5%, to the lowest in the history of the survey, and below even the rate of inflation expectations: 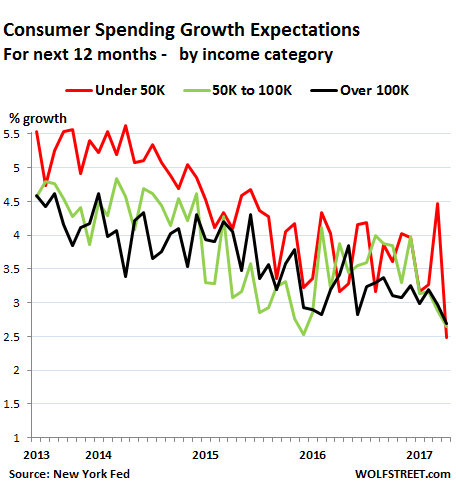 But even those earning above $100,000 – the biggest spenders who can move the needle – they too are trimming back their spending growth expectations to the lowest in the history of the survey, to 2.7%, just below inflation expectations. This extends the trend that has been going on for years.

The middle brackets, those making between $50,000 and $100,000 slashed spending growth expectations to 2.7%, but they were the only group not setting a new low in the data series.

These survey results from the New York Fed don’t particularly match the results from recent consumer sentiment surveys, which have soared to exuberant levels after the election (divided sharply along political lines), though actual consumer spending has gone the other way. The New York Fed’s survey results however parallel more or less roughly the recently very lackluster actual consumer spending that dragged down first quarter GDP to the worst levels since Q1 2014.

This consumer reluctance, or inability, to spend more is already percolating through the auto sector. Despite record incentives, which should stimulate auto sales, the decline in sales is picking up momentum. Read…  #Carmageddon Not Yet, But Hot Air Hisses out of Auto Bubble