What then is driving prices at the moment?

2017 hasn’t seen much volatility in oil prices, something we might not have expected with a new administration, a change in Fed policy, Brexit and a hundred other smaller events this year. So, what’s left to move oil prices, if the most common inputs aren’t having much impact?

Normally large global trends of production, OPEC plans, rumors of war, and actual hostilities will have a significant impact on prices. In recent days, however, we’ve seen a large tomahawk missile strike on Syria and a use of the “Mother of all Bombs” in Afghanistan, with nary a quiver out of oil prices.

What tends to impact oil prices more than anything else – at least when other inputs are being discounted – is the movement of money in and out of futures markets. Those bets represent what players with a real financial interest think about future oil prices. Further, those bets are not just an indication of how financial players are thinking, they can be a primary indicator of what the next intermediate (and even long-term) move on oil prices will be.

This was one of the main theses of my first book –  Oil’s Endless Bid. At the time of its publication, this idea was scoffed at by virtually every oil analyst out there. Today, measuring the financial motion of speculative money in and out of oil futures is considered a necessary tool for anyone trying to gauge oil’s next move.

But take care: Intense bets that oil will rise (going long) are often more likely a sign that oil prices are soon headed DOWN. Similarly, a relative lack of interest in being long can be useful in timing oil’s next move UP.

In any case, with oil prognosticators waiting for oil to rebalance (a long road) and OPEC to either continue or abandon production restrictions in June (an equally long road), the market has become almost singularly focused on speculative interest in driving prices.

Take a look at this chart, particularly the red line at two recent moments: Early March of this year and the last entry of April 17th. In early March, long positions were reaching historically high levels… 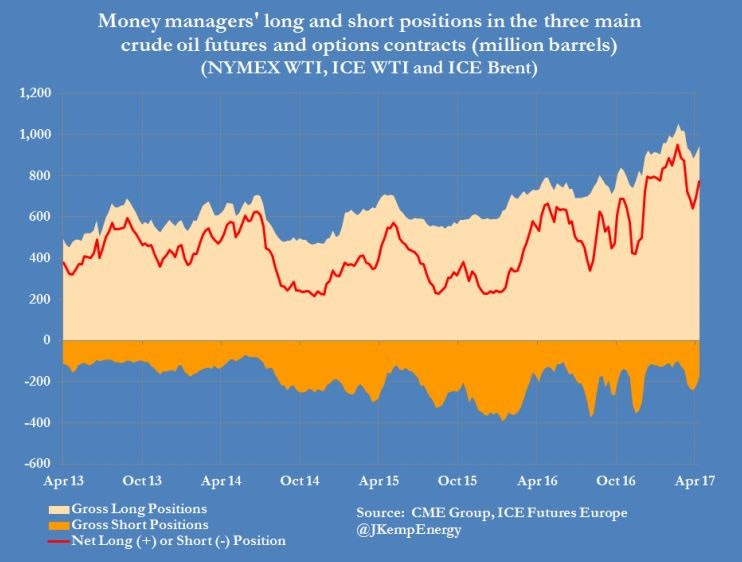 Ultimately this resulted in the mini crash of prices from $55 to $48 in early March. The move in that red line back up shows again strong speculative long positions in the last few weeks which may have contributed to the mini crash back below $50 by Friday. 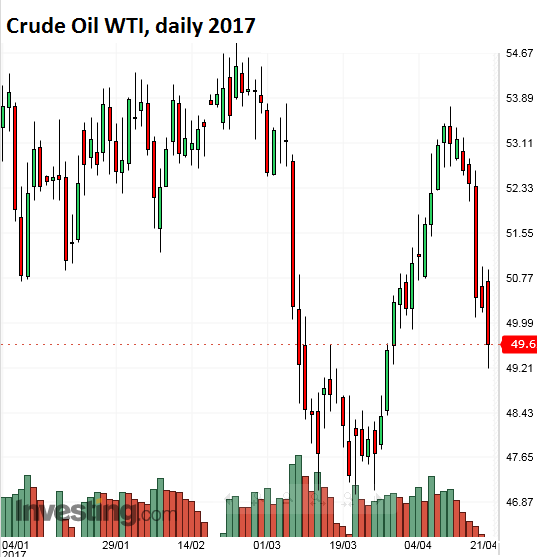 Another caution: Don’t think you’ve found the holy grail of predicting oil prices just because the indicator was so on the money recently. Sometimes longs can accumulate for months without a negative reaction in the futures. And the many other factors we highlighted early in this piece that most oil analysts harp upon can be as important or more important at other moments.

For today, however, as rebalancing and OPEC production meetings remain far in the future, we need to maintain contact with these financial inputs to understand the most recent moves we’ve seen in oil prices. By Dan Dicker, Oil & Energy Insider