“Cementing its place as the most heavily-lossmaking private company in the history of Silicon Valley.”

On Good Friday, when markets were closed and when the entire financial world was tuned out, and when certainly no one was supposed to pay attention, Uber, the most highly valued – at $62.5 billion – and the most scandal plagued tech startup in the world, took the until now unprecedented step of disclosing its audited revenues and losses for the fourth quarter and for the full year of 2016.

Rumors of ballooning losses for 2016 had been swirling since last summer. Bloomberg reported in August that Uber had lost “at least $1.2 billion” in the first half. In December, Uber’s loss in Q3 was said to “exceed $800 million,” according to Bloomberg, and its annual loss “may hit $3 billion.” Others chimed in as some of Uber’s dozens of investors who’re getting its financial statements share them in dribs and drabs with the media.

But on Friday, Uber itself disclosed that it lost $2.8 billion before interest, tax, depreciation, and employee stock options – the latter likely being a big chunk, as the earnings of publicly traded companies that award stock-based compensation, such as Twitter, regularly show. Translated into a net loss, including the expense for stock-based compensation? Dizzying. But Uber wisely didn’t disclose it.

The Financial Times, which reported this disclosure, mused that Uber is “cementing its place as the most heavily-lossmaking private company in the history of Silicon Valley.”

In Q4 alone, it lost $991 million before interest, tax, depreciation, and stock-based compensation, up 5% from the losses in Q3 and nearly double its loss in Q1.

However, as Uber has expanded at break-neck speed into more than 70 countries, stirring up numerous hornets’ nests of local and national laws and regulations, revenue soared over 200% from Q1 to reach $2.9 billion in Q4. For the whole year, revenue reached $6.5 billion.

This is the image of its skyrocketing 2016 quarterly revenues and ballooning losses before interest, tax, depreciation, and stock-based compensation: 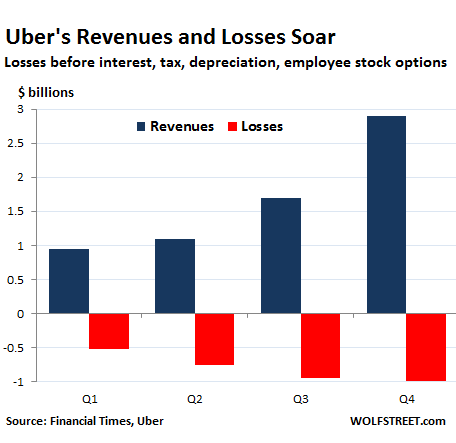 Uber recognizes the entire fare of shared carpool trips as revenue, though it then still has to pay the driver. This has the effect of inflating net revenues, though it conforms to Generally Accepted Accounting Principles (GAAP). For trips that are not shared, it only recognizes its commission (generally 25% of the fare) as revenues.

If you burn $3 billion in cash a year, and maybe more in 2017, at what point do you run out of rope? How sustainable is the will of investors to plow billions into Uber, only to see this cash go up in smoke in such a short time?

With investors considering Uber the best thing since sliced bread, it was able to do some phenomenal record fundraising in 2016: $5.05 billion in three rounds, plus some “undisclosed” amount in another round. So how much cash is left to be burned?

A “a person close to the company confirmed” to the FT – we just love those strategically placed leaks – that Uber is sitting on $7 billion in cash. It also can borrow $2.3 billion in available lines of credit.

So that’s close to $10 billion to fuel the loss-billowing juggernaut. At the 2016-rate of cash burn, it could steam on for about three years. And at the current state of investor enthusiasm for Uber, it can still raise more – though these things can turn around on a dime.

With this kind of money backing the company, it’s no surprise that Uber doesn’t need to take rules and laws around the globe all that seriously. It has become a veritable legal-war machine to plow through any resistance, enforce its will, and get its way, although that has now turned out to not always work very smoothly.

At this point there are no public signs that investors are getting nervous about the company’s inability to stop or even slow the cash drain. And they don’t appear to have any illusions of ever turning this into a profitable enterprise.

In the end, there is always the public to bail out private investors. A company offering its shares to the public in what would be the most over-hyped IPO of all times doesn’t have to be profitable and doesn’t have to have a path to profitability for as long as they can keep raising new money to burn – see Snap, Twitter, and Tesla.

For now, in these halcyon days of endless liquidity come true, and with enough hype, everything can be made to fly for a lot longer than rational minds might have previously considered possible.

“It’s either one of the great Ponzi schemes of all time, or it’s all going to work out,” mused Mike Jackson, CEO of AutoNation, the largest dealer group in the US, about Tesla whose valuation is “totally inexplicable.” In fact, it’s not “inexplicable” at all. Read…  What Tesla’s “Inexplicable” “Ponzi Scheme” Valuation Says about the Stock Market