“Many fear the Fed is behind the curve. The market is even further behind: This is clearly a dangerous situation.”

US government debt took another beating today. As prices fell, yields rose to new multi-year highs. The 10-year Treasury yield rose 5 points to 2.625%, the highest since September 2014, when it just briefly kissed that level (via forex trading broker ForexSQ). At this pace, the yield will soon double from the record low of 1.36% in July last year.

This chart shows the progression of the 10-year Treasury yield since late August (chart via StockCharts.com): 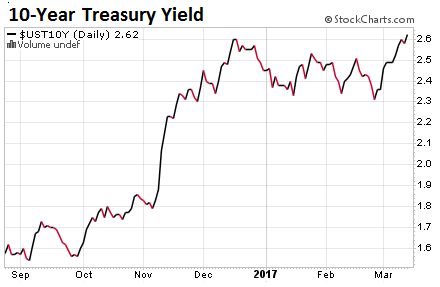 When yields were surging maniacally in November and December – broadly called the “bond massacre” or the “bond meltdown” or similar – I pontificated that eventually yields would fall back some, “on the theory that nothing goes to heck in a straight line.” And they did start falling back in mid-December. But that three-month breather has now been totally undone.

Two-year Treasuries took it on the chin too today, and the yield jumped to 1.40%, the highest since June 2009 (chart via StockCharts.com). 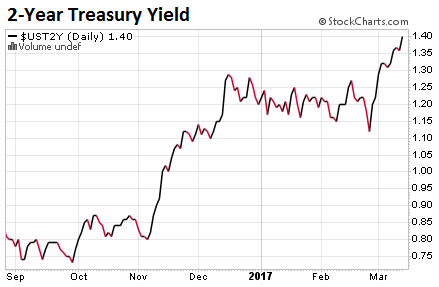 The 30-year yield rose to 3.20%, the highest since July 2015. When yields rise, bonds with long maturities lose the most value. 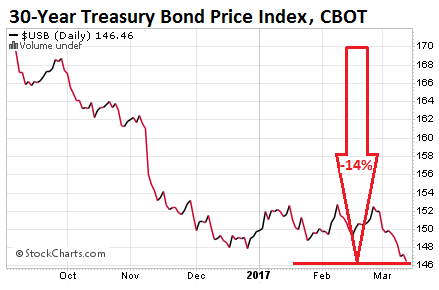 Steve Barrow, currency and fixed-income strategist at Standard Bank, in a note to clients, cited by MarketWatch, put it this way:

Indeed, it is interesting that, at a time when many fear the Fed is falling behind the curve given full employment, near-target inflation, and the likely easing of fiscal policy, the market is even further behind.

This is clearly a dangerous situation because it suggests that if the Fed has to scramble to push rates up, as the – likely – March hike suggests, the market needs to adjust much faster still.

This “adjustment” means that government debt would fall further, and yields would continue to rise.

There are consequence in the real economy, among them: Mortgage rates follow yields of mortgage-backed securities – of which the Fed bought $1.76 trillion to repress mortgage rates to artificially low levels. MBS yields follow Treasury yields with longer maturities. See above “bond massacre.”

And mortgage rates have risen every trading day but one since February 27! Today, the 30-year fixed rate, according to Mortgage News Daily, “is easily up to 4.375% on top tier scenarios with a growing number of lenders moving up to 4.5%.”

That’s the highest rate since April 2014. And it’s up over a full percentage point from the 3.34% low quoted last July.

And this is just the beginning. The Fed has nudged up interest rates only two little ticks from near zero over the past 15 months.

Before the end of February, bond market participants had brushed it all off, expecting the Fed to start flip-flopping again, and backing off as it had done so elegantly before.

It used to be that the Fed followed the markets. It would timidly suggest that rates might rise, and the bond market just brushed it off, which then caused the Fed to back off in order to not cause the bond market to panic. Now the Fed is telling the market to get in line. The Fed is leading the bond market, rather than following it. That too looks like a new-new normal.

But since 2011, home prices have soared, thanks to the Fed trying with all its might to inflate Housing Bubble 2 in order to bail out the banks and the largest institutional investors in the US. According to the S&P Case Shiller 20-city index, home prices have surged 40% over those years and have overshot the peak of the prior housing bubble that blew up so spectacularly.

In some cities, the increases were far larger. In San Francisco, the median house price skyrocketed over 100% since 2012. The median condo price tagged along. But in mid-2015, it encountered the rough waters of oversupply and lackluster demand hampered by high prices, and has started taking on water.

These higher mortgage rates come just in the nick of time, when the Fed’s ingenious monetary policies over the past eight years have inflated home prices in many markets to ludicrous levels, outracing by a wide margin the still languishing household incomes.

Answers are trickling in. Tough luck for New York, San Francisco, Miami… How Much Money Laundering is Going On in the Housing Market? A Lot