The Financial Sector threw $2 Billion at Congress during the Election. Biggest Spenders? Not the Banks.

The Financial Sector – whose products, risk-taking, and shenanigans blew up the sector and everything around it during the Financial Crisis – has finally gotten the memo in a serious way: During the past election cycle (2015-2016), it doused the members of the US Congress with a record amount of money to “influence decision making” and get what they want: deregulation, handouts, and subsidies.

That’s over $3.7 million per sitting member of Congress, according to a report released today by Americans for Financial Reform. The $2 billion tab fell into two categories:

“The financial sector is by far the largest source of campaign contributions to federal candidates and parties, and the third largest spender on lobbying,” the report explains, based on data by the Center for Responsive Politics (CRP), which tracks campaign contributions reported to the Federal Elections Commission (FEC) and lobbying expenditures reported to the Senate Office of Public Records.

But actual amounts are much higher:

So the $2 billion is a minimum. The actual total could be $4 billion, or whatever. That is starting to be real money.

Who is Number 1? Goldman Sachs? Wells Fargo? Nope. The National Association of Realtors (NAR). It’s trying to get the government to inflate the housing market in myriad ways, for instance by dominating the mortgage industry, including guarantees and mortgage-backed securities, thereby subsidizing mortgage rates. It’s all about Realtors making more money because commissions are fatter if extracted from higher home prices. And the NAR is very concerned that the government might be cracking down on pandemic money laundering in the housing sector.

Commercial banks are further down on this list (campaign contributions and lobbying expenses combined):

The report lists many more entities by name. These are just the top 20.

Clearly, Goldman Sachs, near the bottom of the above list, doesn’t need to spend that much money on campaign contributions and lobbying. It gets what it wants by other means, for example having its ex-executives play major roles in the administration and at the Fed.

This chart of the past 9 election cycles shows how overall performances have improved over the years. So this is certainly an exciting growth sector in the US economy, however crummy the rest of the economy or corporate earnings might be. It also shows how the $2 billion were divided up between “campaign contributions” and “lobbying”: 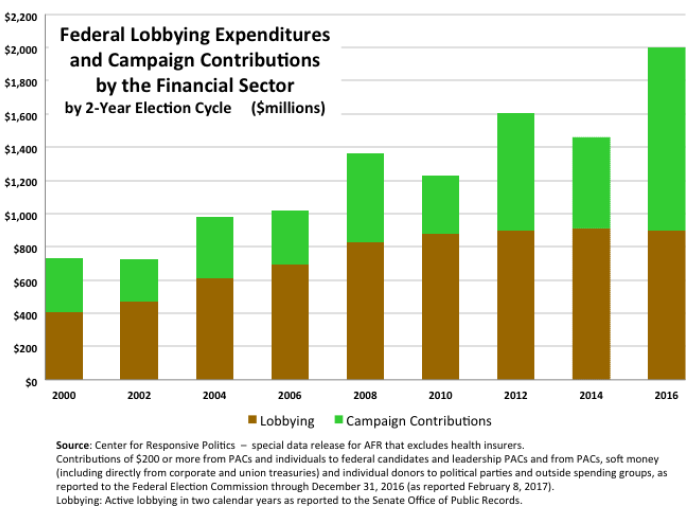 Here are the top five recipients in the Senate:

And here are the top five recipients in the House:

The chart below shows campaign contributions to Democrats and Republicans, based on contributions that were identified by party (only a portion are), with the federal election cycle in solid columns and the in-between years in striped columns. 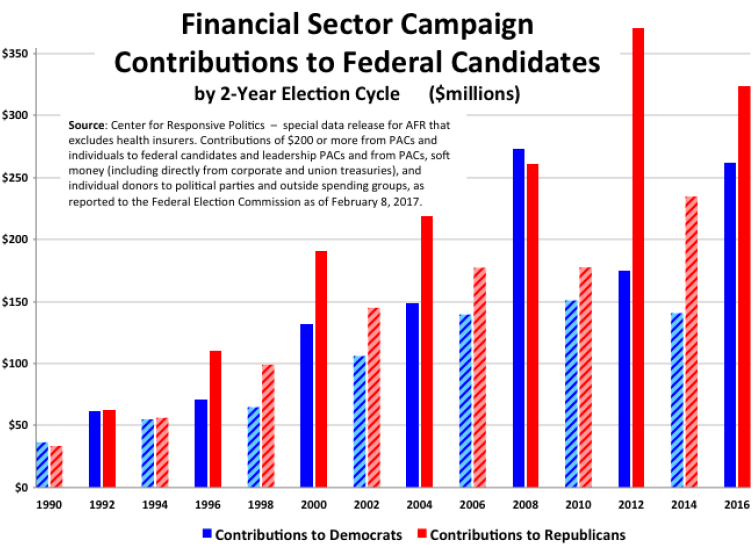 The Financial Crisis is already forgotten, except the key element for the financial sector, including the housing sector: they got bailed out by the government and to a much larger extent by the Fed – and they continue to get propped up with the still ultra-low interest rates and the Fed’s gigantic pile of securities, including mortgage-backed securities, that it has acquired during the phases of QE.

So it’s no big deal, apparently, for these players if there is another financial crisis. But deregulation must happen. Financial reforms must be rolled back. The housing market must be subsidized more than ever. Bonuses, stock-based compensation, share repurchases, and commissions beckon. What is in reality a relatively small amount of money – just a few billion bucks, a pittance really – must be spent by the industry to reap the huge payoffs. As the old saw goes, you have to spend money to make money.

But in the real economy, where has all the optimism suddenly gone? Read…  Atlanta Fed GDPNow Forecast Spirals Down in Amazing Manner