What the experts of the “restructuring industry” see.

The US “restructuring industry” – the advisories, law firms, investment banks, lenders, private equity firms, hedge funds, and others that deal with troubled companies when they’re restructuring their debts either in bankruptcy our outside of bankruptcy – had been through some very lean years as the Fed’s easy money and yield-desperate investors were floating even the leakiest boats.

But in 2015, the industry began licking its chops. And in 2016, total commercial bankruptcy filings jumped 26% from a year earlier, according to the American Bankruptcy Institute. It was the first rise since 2010.

2016 was the “official rebound of the turnaround industry,” as Alix Partners, one of the big advisories in this industry, put it in its report, North American restructuring experts survey: a changing world. The year “will be remembered for some of the most impactful global events on record that not even the most well-informed experts could have predicted.” Hence, increased profit opportunities in 2017 for the restructuring industry.

Industry experts are now counting on a surge in companies that, buckling under their debts, will seek to “restructure” them either in bankruptcy court our outside of it, at the expense of their creditors and equity holders.

In its survey of restructuring experts – lawyers, investment bankers, lenders, hedge fund professionals, financial advisors, private equity professionals, claims agents, and others – Alix Partners found that 49% of the respondents expected US restructuring activity to increase further in 2017 while 29% expected activities to remain at the already elevated 2016 level.

Among the dominant macroeconomic factors that could impact US companies (respondents could list several): 90% listed the slowdown in China and 85% “global sovereign instability.”

“Where are the likely pockets of distress in 2017?”

The energy sector had been in the top position of expected restructuring activities in 2015 and 2016. But for 2017, the experts – perhaps reminiscing about how much money they could have made with oil at $30 a barrel instead of over $50 – lowered the sector into second spot behind retail. And then there’s a surprising sector to move into third position: healthcare. Note, experts could select up to three sectors (chart by Alix Partners): 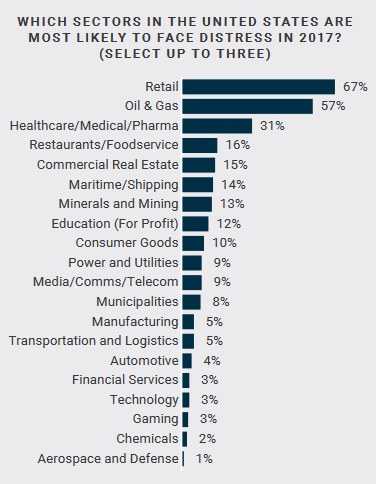 We’ve been waiting for Sears Holding, the big whale, to wash up on the beach. And just today, Eastern Outfitters, the parent of Bob’s Stores and Eastern Mountain Sports, filed for bankruptcy protection. Like so many failed brick-and-mortar retailers, it is owned by a private equity firm. On January 17, Limited stores filed for bankruptcy.

And in 2016, there was a whole slew retailer bankruptcies, including:

So in 2017, retailers should be even more fruitful for the restructuring industry. Alix Partners sees some particular challenges for teetering retailers:

Retail’s cost base is structurally difficult to adjust because of the industry’s large real estate footprint. Once a retailer gets into trouble, it becomes more difficult for that retailer to recover than it is for most other businesses. Our November 2015 retail bankruptcy study revealed that 55% of retail bankruptcies have ended in liquidation since 2005.

The oil & gas sector has moved down a notch as supplier of restructuring candidates, with 27% of the experts predicting that the sector will “stabilize” in 2017, and with new money flowing back into the sector, “the worst may have passed.” But still, 55% of the respondents do not expect a turning point until 2018,

And in third position on the above list of distress and restructuring opportunities in 2017, healthcare. There’s a new reason. The report:

The incoming US president’s campaign platform of repealing and replacing the Affordable Care Act is creating enormous uncertainty in the insurance, pharmaceutical, and healthcare services sectors. Complex reimbursement regulations and other regulations – the basis of the industry’s business models – are all potentially subject to change.

Many state-level insurance exchanges have already failed or are severely distressed, but opportunities may open up for new models and start-ups in the insurance sector. Similarly, more consumer-directed healthcare consumption could also expose inefficient providers and hasten their declines.

And outside the US?

The experts see even more opportunities for the restructuring industry globally: 57% expect restructuring activity outside the US to increase, and 40% expect it to remain at the level of 2016.

Oil & gas is still in first position for 2017 restructuring opportunities globally, followed by the maritime and shipping industry, the great model having been the Hanjin bankruptcy last August and the mayhem that followed. Alix Partners predicts that “the real pain in 2017 will be felt by tonnage providers in containers, dry bulk, tankers, and offshore supply that are facing limited demand for their vessels.”

Also note that 32% of the experts have their eyes on sovereign debt as a restructuring opportunity, in fourth position (chart by Alix Partners): 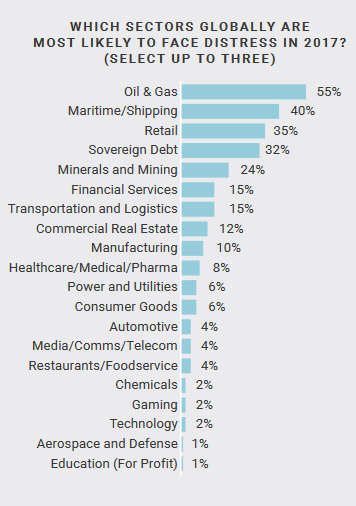 The experts figure that beyond the US, the UK will see the most restructuring activity in 2017, based on the dynamics of Brexit, followed by Italy, China, and Brazil.

The misery of those struggling sectors in 2017 in the US and globally – and the pain for bondholders, other creditors, stockholders, and employees – should make it a year brimming with opportunities for the restructuring industry. Because there are always opportunities somewhere.

And here’s a red flag that’ll be highlighted only afterwards as a turning point. Read…  Consumer Bankruptcies Rise for the First Time since 2010

32 comments for “The Growth Industry in 2017? Debt Restructuring & Bankruptcy!”