There may be a day when we look back at the current craze of “leveraged share buybacks” – as Fitch Ratings calls these creatures of financial engineering – the way we now look back at the craze of leveraged buyouts (LBO) just before it all came apart during the Financial Crisis.

If a company with a torrent of free cash flow uses some of this cash to invest and expand, and then uses some of the remaining cash to pay dividends and repurchase its own shares, few people would quibble with it.

The problem for bondholders, and stockholders ultimately, arises when a company doesn’t generate enough cash to pay for its investments, dividends, and share buybacks, and ends up borrowing to fund share buybacks, thus increasing its debt burden while hollowing out its equity capital.

Instead of investing this borrowed money to expand and create more business whose cash flow would help service that debt in the future, companies blow this money on reducing the number of shares outstanding, or at least watering down the impact of executive stock compensation plans. Nothing good ever comes of these “leveraged share buybacks,” other than making per-share metrics look better.

And that’s exactly what has been happening, encouraged by the Fed-inspired ultra-low interest rate environment, which makes debt cheap and creditors desperate.

According to the report, share buybacks have exceeded free cash flow after dividends (FCF) since 2014 among Fitch-rated companies, “with most companies using debt to cover the shortfall, underscoring a more aggressive stance across the sector.”

The numbers are huge. This table lists the ten companies that bought back the most shares, blowing $138.8 billion over the last 12 months: 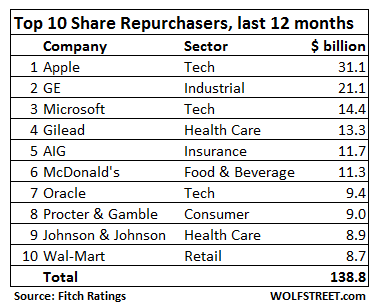 GE is the exception in this group: it has been selling the assets of GE Capital and has used some of the proceeds for share repurchases. This lowers the number of shares outstanding, which makes sense, given that GE is shrinking via these divestitures.

Repurchases pose risks for bondholders: credit down grades, higher risks of defaults, lower recoveries in case of a default, and thus higher funding costs – in theory.

But in the current interest rate environment, funding costs are ultra-low for higher-rated companies, and “many” of them “have been willing to see their rating drift lower, but few have been willing to sacrifice an investment grade rating.” They draw the line at junk territory.

The risk of a downgrade due to share repurchases is concentrated among higher-rated companies — typically those rated ‘A’ and higher — as management teams may conclude that the benefit of reducing share count exceeds the cost of moving down the rating scale.

When companies hobble toward a junk rating (below BBB-), share repurchases become a balancing act. Brinker International’s aggressive buybacks are “noteworthy” in that they pushed its credit rating down to BB+. So junk.

McDonald’s, Number 6 on the list above, was downgraded three times over the past 18 months, from A to BBB, due in part to “concerns about its operating performance” and due in part to “a conscious decision by management to employ higher financial leverage by borrowing to repurchase shares.” Two more downgrades would put McDonald’s into junk territory.

During the Financial Crisis, when shares were dirt cheap, share repurchases came to a halt. But as share prices rose, buybacks started picking up again, and since 2014, have exceeded these companies’ free cash flow. The shortfall was typically filled with borrowed money.

Companies are the relentless bid. The purpose of buybacks is not to buy low, but to drive up the price of their shares, and to do that, they try to buy high.

Companies that do a lot of their business outside the US and keep their cash registered in foreign jurisdictions to avoid US taxes cannot buy back their shares with that foreign-generated cash. So they borrow in the US to buy back their shares, and this too increases their leverage “in some cases, causing negative rating actions.”

Among the reasons for the craze in share repurchases, according to Fitch:

The universe of Fitch-rated companies spent about 3% of revenues on share buybacks and about 6% on capital expenditures over the past 12 months. But those are averages; they cover up big variations.

At the high end, the retail/consumer sector and the pharma/healthcare sector spent more on buybacks than on capital expenditures: “This assertive posture can be explained by their low capital intensity, relative stability through cycles and, in the case of pharma companies, healthy cash flow generation.”

In terms of pharma companies, what this elegant phrasing means is that rampant price increases generate a lot of extra cash.

At the low end, the oil & gas sector, ravaged by the oil bust, got busy struggling with their capital holes, and share buybacks have disappeared from the menu. Instead, over the past 12 months, “the vast majority” of oil & gas companies issued more stock to raise capital than they repurchased.

Fitch expects share buybacks to remain “elevated” until expectations for economic growth in the US improve, which might prompt “corporate America to allocate more capital to growth projects,” rather than blow it on share buybacks.

But here’s what typically causes a decline or even a plunge in leveraged share buybacks: rising interest rates that make that strategy too costly; a sharp selloff in the stock market that knocks the wind out of executives; and tightening credit conditions where borrowing becomes difficult and where creditors gain the upper hand, inserting stiff demands into debt covenants, and refusing to lend if a company is going to blow this money on share buybacks.

The energy sector just went through this scenario. For the remaining buyback heroes, the credit bubble is intact, creditors are cowed, and credit market discipline has been surgically removed by the Fed’s policies. But the longer the leveraged share buyback craze continues, the more bondholders and shareholders are at risk – see the craze before the Financial Crisis.

So what would Yellen do? Read…  Treasuries Got a Break. Now Beatings Resume until the Mood Improves

34 comments for “What Will Prick the “Leveraged Share Buyback” Craze?”