That trade was just waiting to unwind.

On Tuesday, the dollar fell 1.25% against the basket of currencies in the Dollar Index. The index is down 3% since its peak at the end of 2016. US companies that report in dollars but have sales and income outside the US in other currencies – which is much of the S&P 500 – love this. When they translate their foreign-currency revenues and earnings into weaker dollars, they get to show more dollars.

US consumers have benefited from the “strong dollar” because it kept a lid on price increases of imported goods and made overseas vacations more affordable.

But for companies, the “strong dollar” has been a common complaint during earnings calls since it started rising in mid-2014, when the end of QE Infinity approached. From April 2014 through its peak in late December 2016, the Dollar Index soared 32%. Global US companies have lamented this rise every step along the way.

So, by this logic, the dollar’s sharp drop on Tuesday should have caused stocks to surge. But they sagged.

In the media, the dollar’s tumble was presented as another Trump communication accomplishment. The dollar was “too strong,” he’d told the Wall Street Journal. “Our companies can’t compete with them now because our currency is too strong. And it’s killing us.”

There was even some head-scratching how Trump dared to say something like this, abolishing the official “strong dollar policy” of the past few decades, when in fact it had been abolished in all but name long ago, and for all to see. But there’s more to it.

The dollar has become a global magnet after the Fed started tightening – raising rates and even talking out loud about reversing QE and reducing the assets on its balance sheet – while other central banks are still buying assets and maintaining policy rates below zero.

Everyone piled into the dollar, and it has become the “most crowded trade,” according to a survey of fund managers by Bank of America Merrill Lynch (more on that in a moment). And that “most crowded trade” was just waiting to unwind. In fact, it was already unwinding over the past two weeks. And now that that another spark has been delivered, it fell a bunch more: 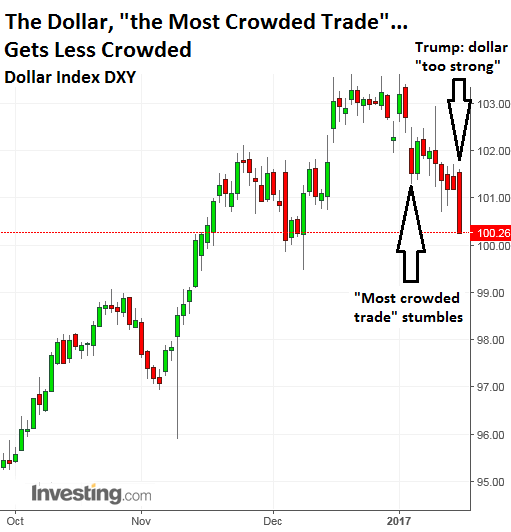 So as folks scrambled to find the exit, the “most crowded trade” – long the USD – got a little less crowded.

Nearly half (47%) of the fund managers that participated in BofA Merrill Lynch’s survey for January called the dollar the most crowded trade, far ahead of the next trades in line. Here’s their chart, via Christine Hughes, Chief Investment Strategist at OtterWood Capital. Note how the perception of “crowded” jumped for the dollar since the prior survey in December: 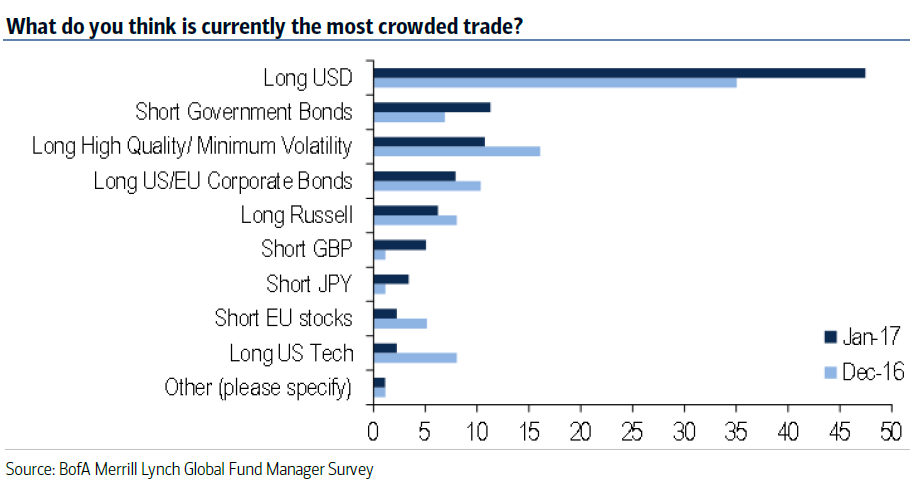 The second most crowded trade, but lagging far behind: shorting government bonds. That trade too has gotten less crowded recently, as prices have risen and yields have fallen, putting a nerve-wracking squeeze on these short-sellers for the time being.

When a trade gets crowded, any little thing can serve as an impetus to get everyone to run for the exit at the same time, and it can cause a sudden unwind of that trade. But the trades of being long the dollar and short government bonds began unwinding over two weeks before Trump pulled his magic trick. Even if the dollar recovers, it might not surge much more, given how far it has already surged since 2014. People get edgy at these lofty levels and start unloading.

But US Treasury yields will likely resume rising. Yields had surged far too fast since the election and needed a big break. But that break might be about over.

Incidentally, if Trump continues to successfully talk down the dollar, it will relieve the Fed from having to worry about it. The “strong dollar” has been an issue with the Fed, and they’ve been keeping a nervous eye on it while tightening monetary policy. At some point, the Fed would try to push the dollar back down, either by jawboning it down, or by loosening monetary policy.

If Trump takes over the task of jawboning down the dollar, the Fed can raise rates further, and faster if it wishes, as some Fed governors have suggested. It can even allow some of the securities to roll off the balance sheet when they mature and thus shrink the balance sheet, as other Fed governors have suggested. And that would most likely cause long-term rates to rise, which would soothe the wounds of the beaten-up short-sellers of US Treasury bonds.

So what could a bond-selloff look like if it takes on momentum? Worse than the 1994 “Bond Massacre,” with “sustained double-digit losses on bonds, subpar growth in developed markets, and balance sheet risks for banking systems.” Read…  How Bad Will the “Bond Massacre” Get?

33 comments for “The Dollar, “the Most Crowded Trade,” Gets Less Crowded”