A mix of deceptive calm, hair-raising craziness, and big surprises.

Much of the strength of the dollar in 2016 has been ascribed to rising interest rates in the US and minuscule tightening by the Fed – or rather “removing accommodation,” as it likes to say – even as other central banks still engage in QE and negative interest rate absurdities. So the US became a destination for the hot money. By December 20, the dollar reached the highest point since December 2002 against the basket of currencies in the Dollar Index, though it has since eased off somewhat since then.

But the Dollar Index contains only six currencies: euro, yen, pound sterling, Canadian dollar, Swedish krona, and Swiss franc. It doesn’t even include the currencies of two of the four largest US trading partners, Mexico and China.

So how has a broader range of currencies fared against the dollar? Turns out, some soared, others plunged.

This chart shows how 25 major currencies moved against the dollar in 2016. Note how the euro and the yen, despite major gyrations during the year and efforts by their central banks to crush them, didn’t end the year in a vastly different place than they’d started it, with the euro down 3.2% and the yen up 2.8%. But I circled four of the currencies that did end up in a vastly different place (more on that in moment) because they’re particularly interesting: 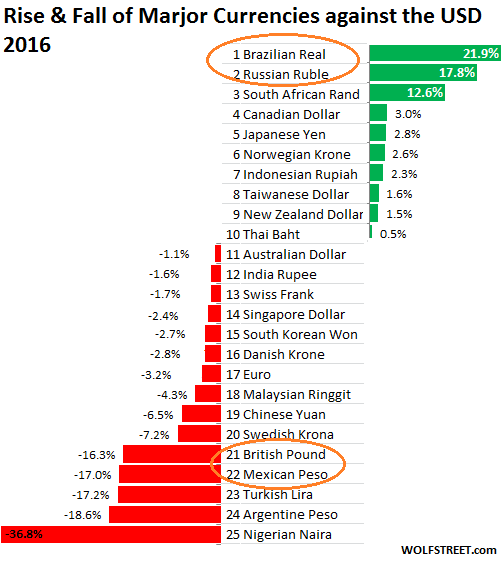 The Brazilian Real had gotten crushed between March 2013 and January 2016, plunging in fits and starts 52% against the dollar as Brazil struggled with, among other scourges: the longest recession in decades that has morphed into an economic crisis; a corruption scandal that has engulfed the top levels of government, the construction industry, the state-owned oil giant Petrobras, and other companies; the oil price collapse that pulled the rug out from under over-indebted Petrobras; and a huge spending spree, involving corruption by politicians and construction companies, to host the soccer World Cup and the Olympics. Nearly everything that could go wrong went wrong.

At the other end of the spectrum, among major currencies, the Mexican peso and the British pound got crushed – down 17% and 16% respectively in 2016, each for their own reasons.

Mexico, one of the top trading partners with the US and dependent on the US for its exports, saw its currency get hit starting in mid-2014, falling 37% over those years, from 13 pesos to the dollar to 20.7 now, despite the Bank of Mexico’s feverish efforts to put a floor under it. Mexico’s state-owned oil giant Pemex, which had long been used as an ATM by various governments, is buckling under its load of foreign-currency-denominated debt, the oil price bust, and massive losses, to the point where the government has started to bail it out in mini-steps.

And then Trump, whose campaign platform included a, let’s say, special agenda for Mexico, was elected President. The already shaky peso plunged another 12% in the three days that followed, settling at an all-time low of 20.9 pesos to the dollar on November 14. And it has not recovered since.

A special word about the Nigerian naira, the biggest loser in the chart above. In response to numerous economic and financial pressures, the government removed the currency peg in June. The naira plunged 30% in one day and has weakened further since. It’s down 36.9% against the dollar for the year.

But the “currency” that soared the most against the dollar? Bitcoin. “Currency” in quotes because it’s not used much as a currency in the overall economic scheme of things. Rather, it’s used as an online betting mechanism against the dollar and other currencies. And it’s an opportunity for people in China to convert their sinking yuan into something else without running into capital controls.

The combination – the lure of gambling and getting around capital controls – has motivated the Chinese to pile into it, and over the year, bitcoin has soared 128% against the dollar, to $988. This is where it had been in November 2013 near the height of the last bitcoin craze, before it plunged over 75%.

The year of the “strong dollar” was that kind of year in currencies, with some central banks (such as the Bank of Japan and the ECB) trying to crush their own currencies, and others (such as Mexico and China) trying to slow the descent of their currencies. It was a mix of deceptive calm, hair-raising craziness, and big surprises that caught markets off-guard. Which is about normal for currencies. And that mix of deceptive calm, hair-raising craziness, and big surprises is likely to play out in 2017 as well. And it seems the much awaited and prophesied “death of the dollar” will likely have to be rescheduled for another year.

But there are big shifts underway. Read…  Foreigners are Dumping US Treasurys as Never Before