Hardly any improvement for individuals since the Great Recession.

When Donald Trump campaigned on how “terrible” the jobs situation was, while the Obama Administration touted the jobs growth since the employment bottom of the Great Recession in 2010, it sounded like they were talking about two entirely different economies at different ends of the world. But they weren’t. Statistically speaking, they were both right.

Since 2011, the US economy created 14.6 million “nonfarm payrolls” as defined by the Bureau of Labor Statistics – whether or not they’re low-wage or less than full-time jobs. But for individuals, this job market, statistically speaking, looks almost as tough as it was during the Great Recession.

Obviously, a lot of people have found jobs, and some of them have found good jobs since then, and there are a ton of “job openings.” But the Census Bureau just told us why the job market is still, to use Trump’s term, “terrible” when it released its population estimates for 2016, just before clocking out for the holidays.

According to this report: From the beginning of 2010 – in terms of jobs, the darkest days of the Great Recession – through December 2016, the US “resident population” (not counting overseas-stationed military personnel) grew by 16 million people.

But since the beginning of 2010 through November 2016, nonfarm payrolls grew by only 13.8 million.

The chart below shows this peculiar relationship between the “resident population” of the US (top green line) and nonfarm payrolls (bottom blue line). Both rose. But the bottom line (nonfarm payrolls) didn’t rise nearly enough.

The difference between the two is the number of people that are not on nonfarm payrolls. They might be students, unemployed, retirees, or working in a job that the “nonfarm payrolls” do not capture (more on that in a moment). This is reflected by the red line, whose slope should head down in an economy where jobs grow faster than the population: 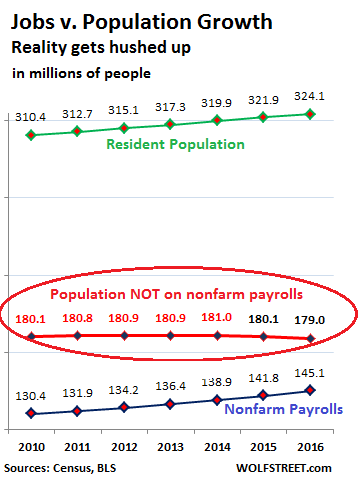 For the first five years of this seven-year period, the number of people not occupying a job as captured by nonfarm payroll data, kept growing (red numbers), even as the touted jobs growth was kicking in. Why? Because population growth outpaced jobs growth over the five years from 2010 through 2014.

Only in 2015 and 2016 has growth in “nonfarm payrolls” edged past population growth. Those were the only two years since the Great Recession when people on an individual basis actually had improving chances of getting a job.

The nonfarm payrolls data is not a complete measure of the US jobs situation. According to the Bureau of Labor Statistics, it excludes “proprietors, the unincorporated self-employed, unpaid volunteer or family employees, farm employees, and domestic employees. It also excludes military personnel, and employees of a big part of the intelligence community, including the CIA, the NSA, the National Imagery and Mapping Agency, and the Defense Intelligence Agency.

There are many folks who’d contend that this population growth is mostly young people who are not yet in the work force and old people who refuse to die, and that for working age people (say, 18 to 65), the jobs growth has been phenomenal.

And boomers are not retiring from the working life. Why should they. Many of them are fit and don’t want to sit around bored, and many of them have to work because they can’t afford to quit working, even if they would like to. So the number of workers 65+ has soared 45% since the end of 2009, from 6.2 million to 9.0 million. So now there are nearly 3 million more of them on nonfarm payrolls than there had been in 2010: 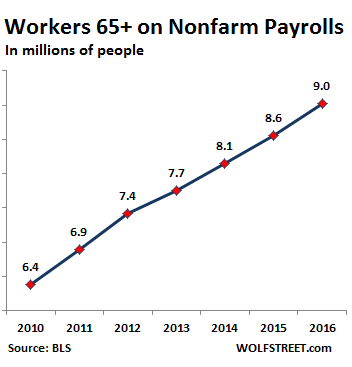 The natural growth rate of the population (births minus deaths) has been declining for years. In 2016, it dropped to 0.38%, a new low. The growth rate from immigration, which fluctuates somewhat with the economy, edged down to 0.31%. So total population growth dropped to a new low of 0.69%, according to the Census report. Of note: the natural growth rate via births won’t impact the labor force until the babies are young adults. But the vast majority of new immigrants are of working age, and they add to the labor force immediately.

So the number of jobs since 2010 has risen by 13.8 million – which the economists are endlessly touting, along with the even better sounding 14.8 million since 2011. But the population has increased by 16 million since 2010. Most of them are people of working age, jostling for position to grab one of these jobs that would put them on the nonfarm payrolls. And this is why the job market for many individuals is “terrible,” as Trump said.

But those might have been the good times. Read…  Red Flag on Recession Crops up in NY Fed’s Coincident Economic Index, first time since November 2009

109 comments for “New Census Data Shows Why the Job Market is Still “Terrible” (as Trump said), but the Numbers Get Hushed up”