Bloodletting in one of the most conservative investments.

All kinds of things are now happening in the world of bonds that haven’t happened before. For example, authorities in China today halted trading for the first time ever in futures contracts of government bonds, after prices had swooned, with the 10-year yield hitting 3.4%. Trading didn’t resume until after the People’s Bank of China injected $22 billion into the short-term money market.

What does this turmoil have to do with US Treasurys? China has been dumping them to stave off problems in its own house….

The US Treasury Department released its Treasury International Capital data for October, and what it said about the dynamics of Treasury securities is a doozie of historic proportions.

In September, these foreign entities had already dumped a record $76.6 billion. They have now dumped Treasury paper for seven months in a row. Over the past 12 months through October, they unloaded $318.2 billion: 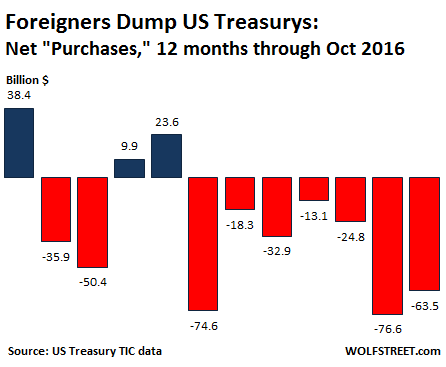 A 12-month selling spree in this magnitude has never occurred before. There have been a few months of timid net selling in 2012, and some in 2013, and a few in 2014, but no big deal because the Fed was buying under its QE programs. But then, with QE tapered out of the way, the selling picked up in 2015, and has sharply accelerated in 2016.

This chart (via Trading Economics), going back to the early 1980s, shows just how historic this wholesale dumping (circled in red) of US Treasury bonds and notes by foreign entities has been: 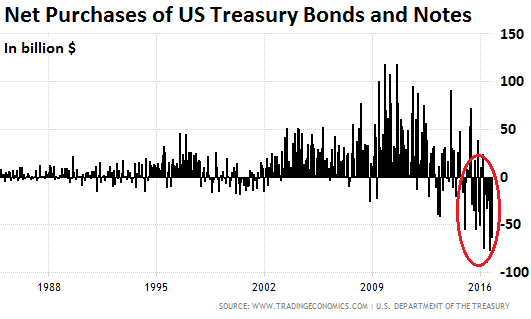 The chart is particularly telling: It shows in brutal clarity that foreign buyers funded the $1 trillion-and-over annual deficits during and after the Financial Crisis, with net purchases in several months exceeding $100 billion. The other big buyer was the Fed.

But since last year, the world has changed. China, once the largest holder of US Treasurys, has been busy trying to keep a lid on its own financial problems that are threatening to boil over. It’s trying to prop up the yuan. It’s trying furiously to stem rampant capital flight. It’s trying to keep its asset bubbles, particularly in the property sector, from getting bigger and from imploding – all at the same time. And in doing so, it has been selling foreign exchange reserves hand over fist.

According to the TIC data (market price adjusted), China was the largest seller in October, unloading $41 billion. Over the last six months, it unloaded $128 billion. This slashed its holdings of Treasury securities to $1.116 trillion, below the holdings of Japan. Japan, now the largest holder of Treasury securities, reduced its holdings by $4.5 billion in October to $1.132 trillion.

Japan and China are by far the largest two creditors of the US – the US still owes them $2.25 trillion – and they’re cutting back their lending.

But who’s buying this paper? For every seller, there must be a buyer. But when demand sags, sellers have to offer a better deal. So they have to cut the price – for buyers, it means that the yield rises and becomes more attractive. The yield of the 10-year Treasury has nearly doubled since July this year, settling today at 2.60%: 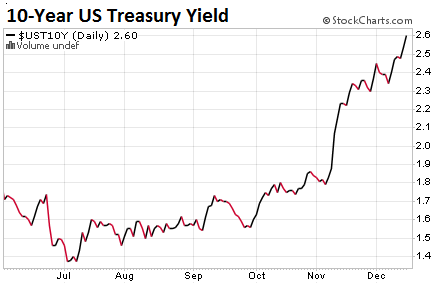 At this yield, Treasurys found buyers today. But the remaining buyers – now that the biggest holders have turned into sellers – may demand even higher yields in the future. This comes on top of a lot of new supply: Over the last 24 months, the US gross national debt has ballooned by $1.85 trillion, or by about $925 billion per 12-month period (using the two-year average eliminates the distortions of the debt ceiling fight). Soon, the US gross national debt will hit $20 trillion.

And given President Elect Trump’s ambitious deficit-spending and tax-cut programs, a lot more debt may soon wash over the market. But this time, neither China nor Japan, nor the other major foreign entities may be willing and able to bail out the US, as they’ve done during and after the Financial Crisis. The bond market sees this too. Hence, the bloodletting in Treasurys, considered among the most conservative investments in the world.

But the “death of the dollar” will have to be rescheduled. Read…  Currency Armageddon? A Word about the Hated Dollar

131 comments for “Foreigners are Dumping US Treasurys as Never Before”