One thing is working in this economy that has been stuck for years in a slow-growth mire: the inflation of asset prices. And the Federal Reserve, which has been engineering this miracle so adroitly, just released its latest progress report.

That 12-month increase of $5.2 trillion is larger than the GDP of Japan. Just by inflating asset prices. Why even bother to work? We’ll get to that in a moment.

This chart shows the fabulous and ever increasing wealth of US households, which surely must be a result of a wondrous high-growth economy that is hitting on all cylinders and is making everyone rich: 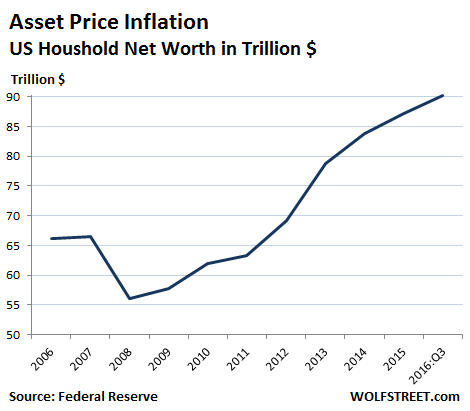 That $1.59 trillion increase in household net worth in Q3 included:

Total household assets, before debts, were valued at $105 trillion, so about 5.7 times US GDP.

In turn, households carried $14.6 trillion in debt, which grew in Q3 at an annual rate of 4%, with consumer credit jumping 7.5% and mortgage credit rising 2.9%.

Over the third quarter, the S&P 500 index rose 3.3%, so that helped. But that’s like so October 31. Since then, the wondrous “the-economy-is-terrible” Trump rally kicked in, and those households holding the most stocks will have done well so far in Q4.

Wisely – nay, ingeniously – the Fed doesn’t offer any data on the distribution of household wealth. But from other data, including from the Fed itself, we know that the vast majority of households own few or no financial assets.

In fact, according to another report by the Fed, we know that 46% of adults do not have enough money to cover a $400 emergency. They’d have to sell some furniture or charge it on their maxed-out credit card or just forget about it. Similarly, a survey by Bankrate.com found that 63% of Americans don’t have enough savings to pay for a $500 to $1,000 emergency.

This is the economy of today. The vast majority of that $90.2 trillion in elegantly inflated household wealth is distributed to a small percentage of the wealthiest households, which have gotten vastly wealthier in the process.

For the rest of the Americans, for vast majority, there are only a few crumbs here and there, if any: even if they have 20% equity in their home, the lucky ones, and that home is worth $200,000, it amounts to $40,000 in equity. If 50 million households (of 124.6 million total households in the US) are in this lucky position, it amounts to only $2 trillion, a drop in the $90.2 trillion bucket.

Stock prices and real estate prices in many metros have long surpassed prior bubble records. In the Fed’s infinite wisdom to inflate asset bubbles no matter what, to refuse to acknowledge asset bubbles when they balloon into full maturity, to avert its eyes when they get so huge that it’s hard to see anything else, and to re-inflate them after they implode under their own weight… with these tactics, the Fed is in part responsible for the reasons this economy is no longer functioning as it should.

There is a price to pay: an asset bubble in real estate creates housing cost inflation that saps the majority of consumers and their power to spend on other things. But no problem for the Fed. They should just borrow the money they want to spend.

Ironically, and with impeccable timing, just today, Gallup released a 120-page report on the US economy – and what’s wrong with it. It’s titled, “No Recovery.” It shows, among the many ills of this Fed-designed economy, that on a per-capita basis, GDP growth has been shrinking for decades, has gotten crushed since the Financial Crisis, and is now down to a measly annual rate of 0.5%: 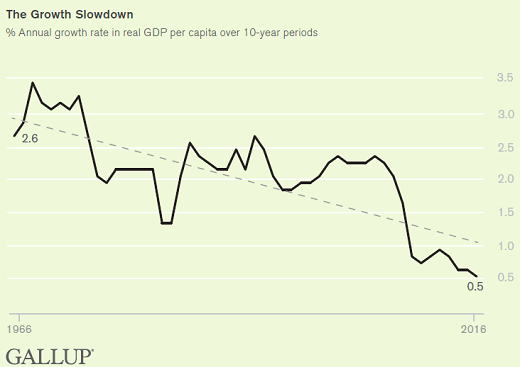 GDP per capita is what inviduals in the real economy actually experience. It’s their slice of the economic pie, their reality. For many, that slice has been shrinking for years, even as it has been growing for those that the Fed has singled out and coddled.

There is hardly a better chart to show that blowing asset bubbles is NOT helping the overall economy, no matter how the Fed, economists, other entities, and much of the financial media twist and turn it, though it has been very successful in enriching a relatively small number of households.

But the hard-working households with no savings to pay for emergencies get a feel-good illusion. Read…  OK, I get it: Companies Clamor for Cheap Labor, Fed Delivers

105 comments for “Who the Heck are these Households that are Worth $90 Trillion?”