It’s not just the oil bust.

This is the first time since the depth of the Financial Crisis that year-to-date collections are lower than they’d been a year earlier, and even two years earlier.

What was at first expected to be just a blip in the data when it appeared in June 2015 – the first year-over-year decline in monthly sales tax collections since the Financial Crisis – has turned into the end of the great Texas retail boom. 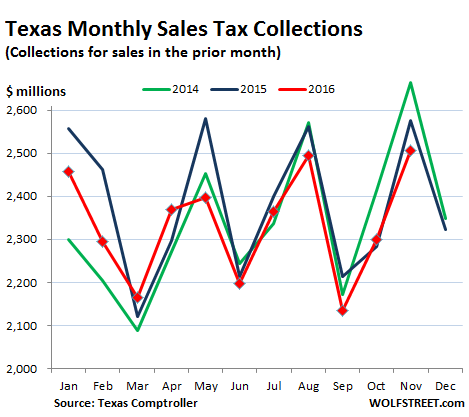 On a per-capita basis, given the growth of the Texas population (up 8% since 2010), it looks even worse: year-to-date per-capita sales tax collections fell nearly 2% from two years ago.

Sales tax collections aren’t an ideal gauge of retail sales. Many food products are exempt. Taxes on motor vehicle sales and rentals are reported separately. The data is not seasonally adjusted, so it can only be compared to the same months in prior years. But online sales are taxed in Texas and are included in this tally. So tax collections are an unvarnished approximation for a large part of retail sales.

This chart shows sales tax collections from 2008. Note the decline during the Great Recession. By comparison, the current decline looks relatively mild, but it’s starting to drag on: 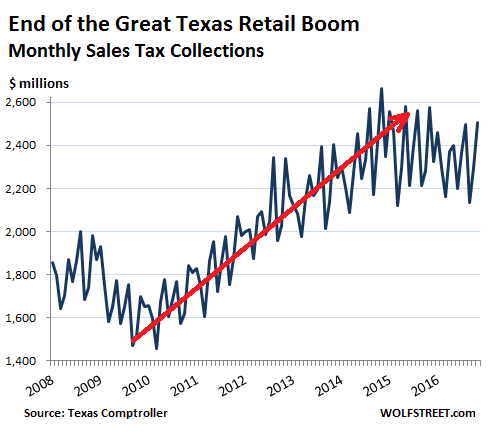 The Texas economy isn’t monolithic. People in North Texas (the Dallas area), in Austin, and some other places are scratching their heads; the economy where they are is doing well. So retail sales may not be all that strong either, but exuberance still reigns in the housing market. Big companies are moving operations into the Dallas area, and total employment in October was up 3.5% year-over-year, to 3.59 million, though that was down a smidgen from September. There aren’t many dark clouds in sight – as long as the housing euphoria holds up.

Then there’s the Houston metro where the dark clouds have form a storm (below data via Houston.org, and the Bureau of Labor Statistics). The oil boom years ago triggered an enormous office construction boom in Houston. When the oil boom turned to bust, office leasing fell apart, sublease space soared off the chart, and the construction sector, with some lag time, entered collapse mode.

However, permits for additions and alterations, nonresidential and residential, are rising. Now’s the time to fix up that old office building or house.

Houston is big, but it’s in a big State, and its weakness cannot alone explain the decline in sales tax collections across Texas that started in May 2015. Whatever the reasons, consumers across Texas have begun to curtail their spending.

55 comments for “Texans Close their Wallets, Houston’s Economy Gets Crushed”