The operative words have been “gradually” and “over time.” Just about all Fed governors use those or similar terms when they talk about removing “accommodation,” or tightening monetary policy, thereby gradually allowing the proverbial punch bowl to empty out, by refilling it each time a little less. That started in January 2015.

It is now happening on three levels: the dollar, interest rates, and even the Fed’s balance sheet – the one that everyone stopped looking at after QE Infinity ended.

As QE was breathing its last gasp, the Fed’s balance sheet reached $4,516.1 billion on January 14, 2015. Since then, the Fed has continued to buy Treasury securities and mortgage-backed securities to replace those that matured. So total assets, after a cursory look that made everyone happy, sort of remained the same: 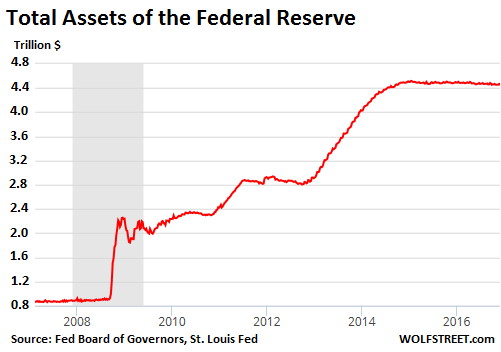 But increment by increment, practically hidden in the zigzagging line, the Fed’s balance sheet began to shrink. Total assets on the balance sheet now amount to $4,446.3 billion. That’s down $70 billion from the peak. Note the acceleration of the shrinkage since early 2016: 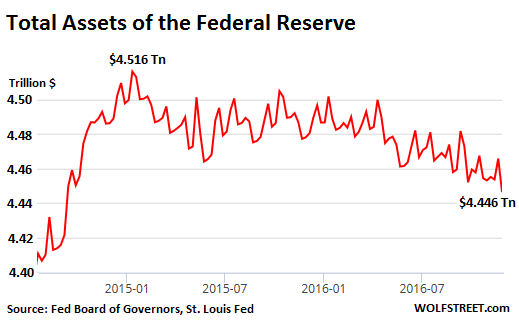 For now, “gradually” and “over time,” and without any kind of announcement to that effect, the Fed’s balance sheet has shrunk 1.55% in nearly two years.

The Fed’s largest position is US Treasury securities, at $2.46 trillion. That’s about flat from its position in January 2015. But within the group, there were some shifts, with some items falling, particularly “notes and bonds,” and with its position in “notes and bonds, inflation indexed” jumping 8% to $106.7 billion. Worried about something they told us was too small, such as inflation?

Mortgage backed securities, the second largest position, fell by $10 billion to $1.741 trillion. And “federal agency debt securities” plunged by $20 billion to $18.5. Clearly, the Fed is withdrawing support for the mortgage market, in micro-steps.

That $70 billion decline in total assets, spread over two years, reflects less than one month of QE Infinity. This is so slow and so uneven that it disappears in the noise of the data on a week-to-week basis. But it is happening.

Then there’s more tightening: the dollar. The dollar index, which measures the dollar’s movements against a basket of other major currencies, has jumped about 25%, from about 80 during the first half of 2014 to 100 in March 2015. It has since vacillated in the range between 93 and just over 100 and currently sits at 100.3.

And the official and highly publicized tightening: The Fed raised rates one tiny increment a year ago. Everyone is certain it will raise rates again next week. More rate increases are expected next year. Fed governors, even doves, have become more vigilant since Election Day, and have said so. And yields have jumped. The 10-year Treasury yield exceeded 2.4% for the first time since the summer of 2015 and now sits at 2.39% (vie StockCharts.com): 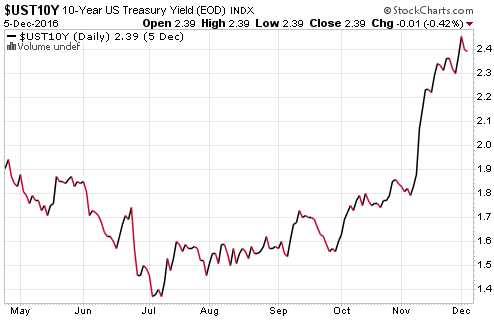 These higher Treasury yields have pushed up mortgage rates, with the 30-year fixed rate now at 4.17%.

And the Fed is OK with it all, with the shrinking balance sheet, the strong dollar, the rising yields, and the sharply higher mortgage rates. New York Fed President William Dudley, a dove, said so yesterday. Markets were beginning to think in terms of tightening, and were responding to it, and that was “broadly appropriate,” he said.

And there’s more to come: “I would favor making monetary policy somewhat less accommodative over time by gradually pushing up the level of short-term interest rates,” he said. The punch bowl will be refilled less and less, that’s the message, even though the economy is growing at the same “new normal” miserably slow rate as in prior years.

And the bond market is already doing the math. Read…  Get Used to Lousy Growth AND Rising Rates: Fed Dove Dudley