“Hope” returns. But we’ve been through this before.

One defining aspect of Gallup’s weekly Economic Confidence Index has been its stubborn negativity over the years, compared to other major consumer indices. The survey, which started in January 2008, experienced its high point that very month, then plunged deeply into negative territory, and remained mired in negative territory, except for a few moments of hope in late 2014 and early 2015, before it all headed south again.

Trump is shaking up a lot of things, and he isn’t even in the White House yet. Throughout the campaign, he lambasted the “fake” stock market rally fueled by the Fed’s policies. He charged over and over again that “Obama is manipulating the jobs numbers.” And the US economy was in “terrible shape,” as he liked to say. This contrasted with the Clinton campaign and with Obama’s insistence that the economy was pretty good.

Fact is, for many people, this economy, as it pertains to their own lives, is in truly bad shape, while for others, the lucky ones, their economy is rocking and rolling with huge payoffs on a daily basis.

Then the election took place.

Stocks in the US, against all guru predictions, have roared to new highs, with the Dow at the moment kissing 19,000. Even overseas stocks have risen. There is incessant talk around Trump about massive stimulus spending on infrastructure and defense, associated with fears of inflation and soaring deficits. Treasuries plunged and yields soared. Mortgage rates followed. Clearly, the bond market is not amused.

And Americans suddenly started feeling pretty good about the economy, according to the Economic Confidence Index. I circled the Trump Effect – the 15-point rise – of the last two weeks: 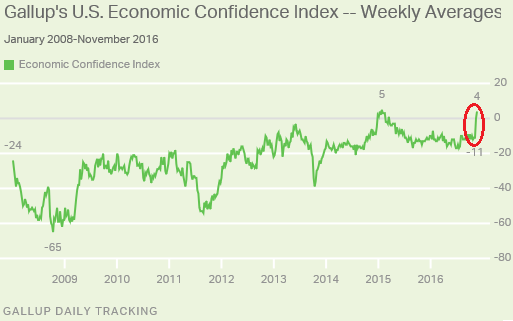 In theory, the index ranges from +100 (all respondents say the economy is hunky-dory) to -100 (all respondents say the economy is lousy and getting lousier). At the trough of the Financial Crisis, the weekly index hit -65. With the exception of late 2014 and early 2015, Americans have remained negative about the economy, according to this index. In the 12 months before the election, the index ranged from -7 on the high side to -17 on the low side.

Then everything changed. Gallup:

Since Donald Trump’s victory in the presidential election, Republicans have become substantially more positive about the economy – particularly about its direction – while Democrats’ former optimism has collapsed.

So the economy is divided by party line…. Hmm.

Current conditions: in the survey week, 29% of Americans considered the economy as “excellent” or “good,” and 23% as “poor.” This produced a current conditions index of +6, up from zero the week before the election, and the highest since the very beginning of the data series, in January 2008, when the index started out at +7.

Economic outlook: since the election, Americans suddenly became bullish on the future of the economy. In the survey week, 47% of Americans said economic conditions are “getting better” and 46% said they’re “getting worse.” As a result, the index rose to +1, from -5 the prior week, and from -21 before the election. That’s a phenomenal 22-point surge in two weeks. I circled the Trump Effect: 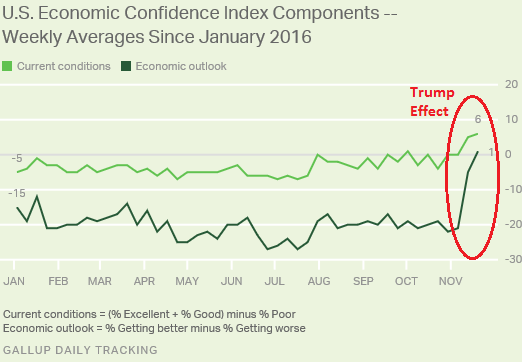 Gallup points out that the “heightened confidence places Trump on much better footing than what his predecessor Barack Obama started his first term with, but it could also set a high bar for the incoming president’s performance.”

Which leaves us to ponder: Why this sudden surge of the confidence index to record territory – albeit a surge from deeply negative to slightly positive? Why, in fact, this surge in the current conditions index? Why would the current economy suddenly have changed so much on Election Day? Trump isn’t even in the White House yet. His policies are far from being implemented, and the economy hasn’t changed one iota since the election.

What has changed is perception. And hope – or “confidence,” as economists like to call it. That’s important for an economy. But we’ve been through this before. This “hope” has led to years of frustratingly low economic growth and to a slew of structural issues, amid the biggest asset bubbles the US has ever seen, and with the spoils being divvied up very unevenly.