Some of the same characters that played leading roles last time.

The value of the US housing market has ballooned to $26 trillion. In many markets, prices exceed even the peak of the prior house price bubble that blew up so spectacularly. This construct is weighed down by $14 trillion in mortgage debt, or about 76% of US GDP. Of that, $10 trillion is owed on one- to four-family residences. The numbers are big – and they matter.

And these shadow banks are different:

[T]hey typically borrow from Wall Street hedge funds, private investors, or banks to make loans, then quickly sell these mortgages to Fannie Mae and Freddie Mac and other buyers, so they can repay their loans and start the process over again.

So subprime mortgages with low or no down payments.

These government entities don’t actually make loans; they buy loans from lenders, package them into mortgage-backed securities, and guarantee them to make investors whole if the mortgages default.

Of these top ten originators, shadow banks originated 63% of the mortgages! 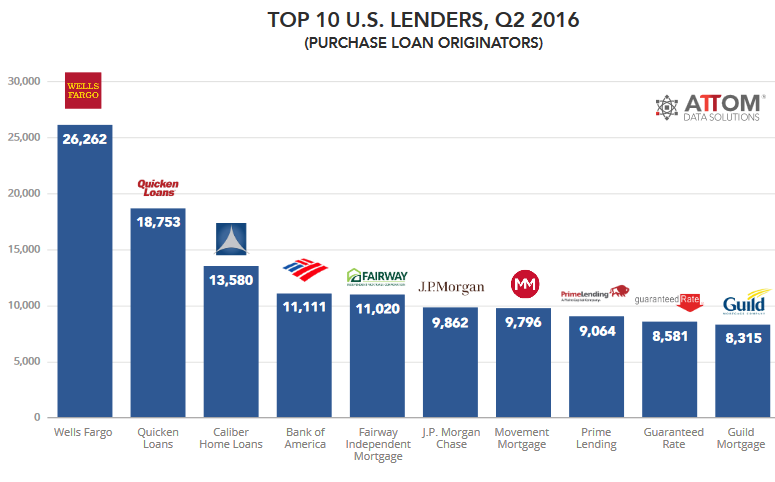 And some of the same characters that played leading roles in the last housing boom and bust have reappeared. Remember Countrywide? The report:

In California, some of the largest nonbank lenders include PennyMac, AmeriHome Mortgage, and Stearns. All three are headquartered in Southern California, the epicenter of last decade’s subprime mortgage lending industry. And all three companies are run by executives who formerly worked at the once- giant Countrywide Financial, the now defunct subprime lender founded by Angelo Mozilo (Bank of America bought Countrywide for $4 billion in July 2008).

Banks still originate the majority of mortgages overall, but barely! Their share has dropped from 91% of originations in 2009 – after many of the shadow banks had collapsed in the housing bust – to 51.7% so far in 2016. The share of shadow banks (blue line) has soared to 48.3% (chart by ATTOM): 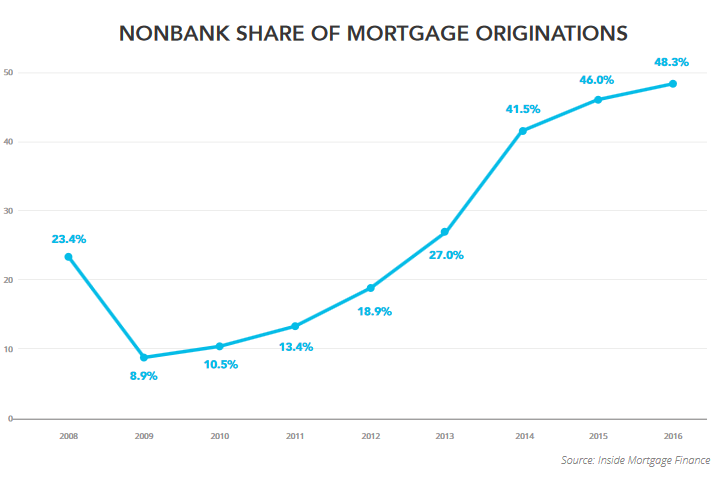 These shadow banks dominate in mortgages that are insured by the FHA and the VA, including no-down-payment and low-down-payment mortgages for buyers with subprime credit ratings, the riskiest mortgages out there. Thus, FHA and VA backed loans have jumped from 6% of all purchase originations in 2006 to 30% in Q3 2016.

“The big banks have restricted their mortgage business,” Guy Cecala, publisher and CEO of Inside Mortgage Finance, told ATTOM. “Instead, banks like Chase and Bank of America are making jumbo loans to more affluent borrowers. More than 50% of their business is jumbo loans.”

Increasingly, the federal government – FHA, VA, Fannie Mae, Freddie Mac, and Ginnie Mae – has played a larger role in the mortgage financing industry as the large depository banks retreat from the home loan market. In all, these five entities own or have guaranteed more than $5 trillion in mortgage risk….

That’s about half of the outstanding mortgage risk.

This chart shows the share of FHA and VA insured mortgages as a percent of total mortgage originations by lender. For example, of the mortgages Wells Fargo originated in Q2, 12% were FHA (blue) and VA (green) loans, compared to about 42% for Quicken Loans: 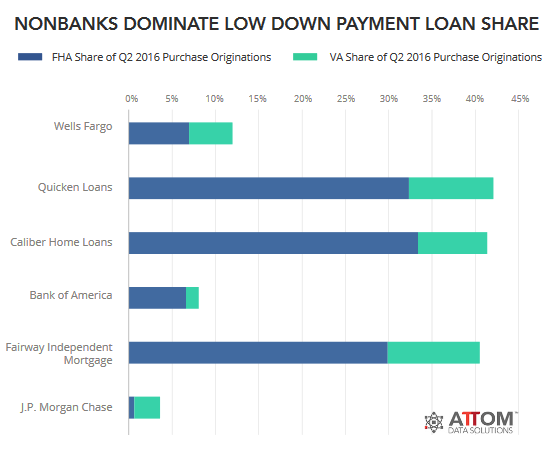 It is largely via this conduit of the shadow banks that the nationalization of the riskiest end of the mortgage industry is proceeding. It has now become completely dependent on government guarantees.

“The government is buying and insuring 60% to 70% of all mortgages,” said Richard X. Bove, vice president of equity research at Rafferty Capital Markets. “The government owns the mortgage market. It’s a nationalized market.”

This artificially pushes down mortgage rates as the risk is born by taxpayers. Low mortgage rates and no-down-payment and low-down-payment subprime mortgages are precisely what is required to inflate already inflated home prices further and drive Housing Bubble 2 to its peak. It creates the foundation for the next housing bust, where taxpayers and/or the Fed, will once again bail out investors in mortgage-backed securities. Why? Because politicians, always eager to buy votes, refuse to get the government out of the mortgage industry.

But there is no risk, we hear constantly. Defaults are at a record low. Same as just before the last housing bust. When home prices soar, no one defaults. You can just sell the home and payoff the mortgage. The problem arises when prices head south. Alas, there’s just no letup in dismal tidbits piling up about the condo markets. Read…  Is Chicago’s Housing Market Next?