“We’ve been patiently waiting for the consumer.”

This just keeps getting worse. The Cass Freight Index, tracking US shipment volumes by all modes of transportation, fell 3.1% in September from a year ago, the 19th month in a row of year-over-year declines, and the worst September since 2009!

After offering a glimmer of “less bad” hope in August [the index was down “only” 1.1% year-over-year], the Cass Freight Index shipments data in September disappointed, providing hindsight that August only gave us “false hope.”

September data is once again signaling that overall shipment volumes (and pricing) continued to be weak in most modes, with increased levels of volatility, as all levels of the supply chain (manufacturing, wholesale, retail) continue to try and work down inventory levels.

There were some areas of growth for shipments. Ecommerce has been reliably booming, as brick-and-mortar retailers lose their footing, a structural shift in the retail industry that will continue to play out over the years. Shipments for the auto and housing/construction industries also grew in September, but at a lower rate.

Alas, shipping for the auto sector will be getting hit further: sales declined in September year-over-year, inventories have reached worrisome levels – 95 days’ supply for F-series trucks, when 60 days is more than enough – and production cuts and layoffs are already being announced.

“Bottom line, the Industrial Recession in the US that began in March of 2015 continues to weigh on overall volumes,” Broughton writes.

The Cass Freight Index is not seasonally adjusted, so it shows strong seasonal patterns. In the chart, the red line with black markers represents 2016. The multi-colored tangle above it represents the years 2011 through 2015. In terms of the goods-producing economy, which relies on transportation to get its merchandise delivered, this is the “economic recovery” in 2016 so far. Note that September is supposed to be the peak shipping season, but the index declined instead of rising: 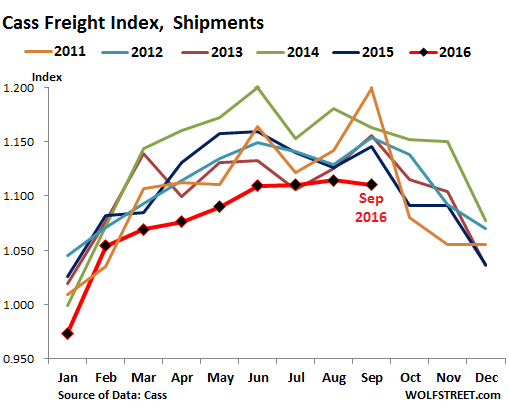 The index is based on “more than $26 billion” in annual freight transactions, according to Cass Transportation. It does not cover bulk commodities, such as oil and coal but is focused on consumer packaged goods, food, automotive, chemical, OEM, and heavy equipment, shipped via truck, rail, barge, and air.

Among those categories, rail has been taking the biggest hit in recent months, and did so again in September, with volumes of containers and trailers (intermodal) falling 4.2% from a year ago, adding to the gloomy scenario of the past two years in the bulk sector [read… Rail Freight Gets Clocked from all Sides in this Economy]

For a “more reliable” gauge of the “pulse of the domestic economy,” Broughton points to trucking, with its focus on manufacturing and retail.

Tonnage has been inching up, and its 3-month moving average has not declined since the Financial Crisis. But not so truck loads. They’ve declined year-over-year in four of the past six months:

No matter how it is measured, the data coming out of the trucking industry has been both volatile and uninspiring. 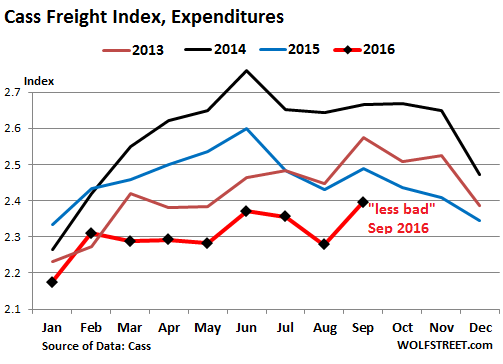 The September decline in expenditures was “less bad” for the wrong reasons: the rising price of diesel fuel over past six months. And it was not due to an increase in pricing power: “As an example, the proprietary Cass Truckload Linehaul Pricing Index (which does not include fuel) fell 3.5% on a YoY basis in the month of September.”

Overcapacity has infected trucking, rail, air freight, barge, ocean container, and bulk, the report points out. Since “the industrial-led recovery (2009-2014) in the US” ended, “we have been patiently waiting for the consumer to take the baton of leadership in economic growth.”

And that’s precisely what has not happened.

Since businesses stocked up for this great consumer recovery, inventories started to accumulate in late 2014 and built to crisis proportions by early 2016, with the inventory-to-sales ratio hitting levels last seen after the Lehman bankruptcy. When business inventories increase, they add to GDP by the magic of the GDP formula. When they decrease, they subtract from GDP. Businesses have been trying to whittle down their inventories. And inventory declines have hit GDP for five months in row now.

This is the longest stretch outside of a recession since 1956-57 and the largest in magnitude since 1995. We expect de-stocking to continue into Q3 in retail, based on the NRF’s (National Retail Federation’s) Port Tracker survey. We remain concerned about elevated levels of cars on dealer lots, and we acknowledge continued efforts to streamline finished inventory in most machinery sectors.

It’s going to get worse. Automakers are now trying to cut inventories via a mix of large incentives and production cuts. Ford already announced, “We continue to match production with demand.” And demand has been lousy. Read…  It Starts: Shutdowns, Production Cuts, Layoffs at Auto Plants